In D.C. to visit my oldest daughter, or “My Kid the Journalist” as I tend to refer to her when I am sharing her articles on Facebook, I was delighted to find that my visit coincided with an exhibition at the National Gallery that promised to be of great import to my own search for meaning and poetic practice.

Overview: For centuries artists have made multi-part series, undertaking subjects on a scale not possible in a single work. This engagement was especially prevalent in the 1960s, as artists dedicated to conceptual, minimalist, and pop approaches explored the potential of serial procedures and structures. Many prominent artists since then have produced serial projects at the renowned Los Angeles print workshop and publisher Gemini G.E.L. The exhibition will showcase 17 such series created at Gemini by 17 artists over the past five decades. It will include seminal early works by artists such as Roy Lichtenstein, Robert Rauschenberg, and Frank Stella as well as more recent serial projects by John Baldessari, Julie Mehretu, Richard Serra, and others.

Either I am again late to the game, or suspect this is a stance-toward-art-making that has barely scratched the surface of possibility. It has helped me to understand that, once again – quite organically – I have come to this mode as a practitioner. In my view the examples of Nate Mackey, Daphne Marlatt, Robin Blaser, George Stanley, George Bowering, Brenda Hillman, Robert Duncan, Michael McClure, Sam Hamill and I would posit Joanne Kyger as well, are the main practitioners of serial form in North American poetry. Mackey told me in an interview that was published in Amerarcana that the serial poem was essentially the most open writing stance one can take. He said it includes,

Now compare this to something attributed to one of the 17 featured artists in the National Gallery’s Gemini GEL exhibition, Richard Serra,

…Individual works in a series can become critical of each other and that the success of one hinges on development of the rest.

In his 1999 series Rounds, we see prints of black holes one Facebook commenter likens to bullet holes, black holes often complete with their abstract expressionist drips and splotches. Artwork created while Serra was listening to Jazz and Blues and named after specific musicians like Billie Holliday and John Coltrane. 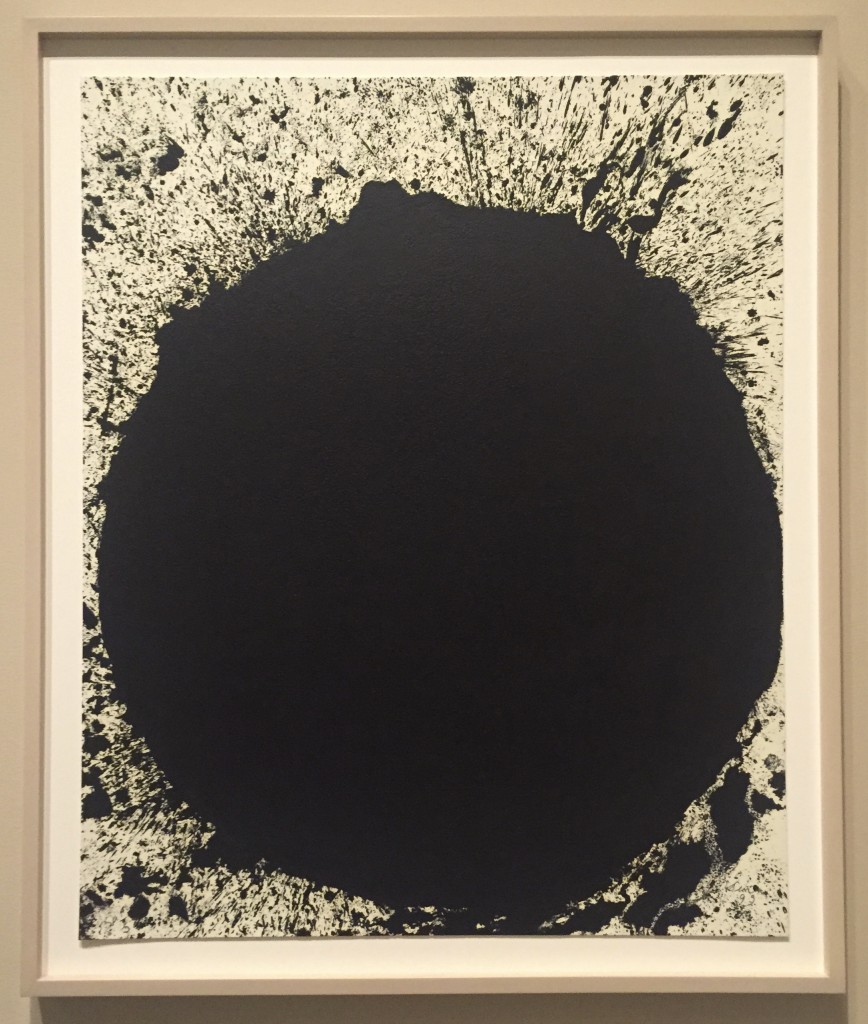 And I would walk through the exhibit in the morning, have lunch in the gallery cafe watching the waterfall (almost typed “waterwall” which would be accurate). The very capable National Gallery Senior Curator Diane Arkin took a small group on a tour of the exhibition at 2pm and was very respectful of my interest in seriality. Some of the thoughts that came up for me were:

1) The strong Black Mountain thread through serial form, from Robert Rauschenberg (included in the exhibition) to Josef Albers, whose work with seriality was alluded to in some of the promotional materials.

2) The openness of serial form is also linked to the very clear understanding that all things are connected. When you see a print from Serra’s Round series, you can see how his mind could go from one to another as the designs got more wild and energetic. How this is a world apart from the view that we are separate from other groups of people, (say Muslims fleeing Syria for example), is of considerable import to me at this time, a palpable contrast to what our culture would call rather ironically “conventional wisdom” and ANOTHER example of how process implies politics, and informs content as well. Most poets do not understand this.

3) The brilliance of the “found” art of Michael Heizer in his Scrap Metal Drypoint series, which includes cut discs from salvaged scrap metal sheets that had been scratched, gouged or stained with chemicals evokes Chinese landscape paintings in a completely remarkable manner. 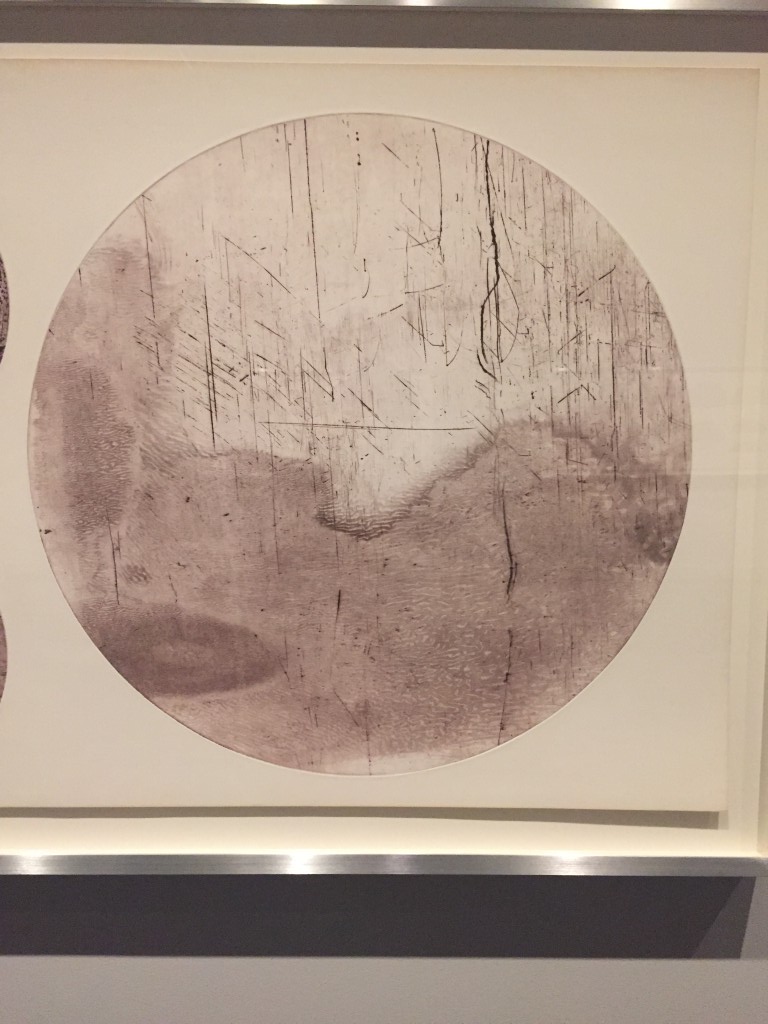 4. My own poetry can be viewed from the perspective of one large serial poem, with smaller fragments of seriality in the form of American Sentences, The August Poetry Postcard Project and the ongoing series re-enacting the history of Cascadia in A Time Before Slaughter and Pig War & Other Songs of Cascadia. I think the interviews are part of this work as well, though not poetry and the Cascadia poetry anthology part of this series as well. The themes are there, but not for me to articulate at this time.

Before leaving me, Diane Arkin was kind enough to lead me to the two versions of Rouen Cathedral that the National Gallery owns and displays in a “Late Monet” gallery. Paintings from one of Monet’s various series, and the one with the most urgency, in my view. 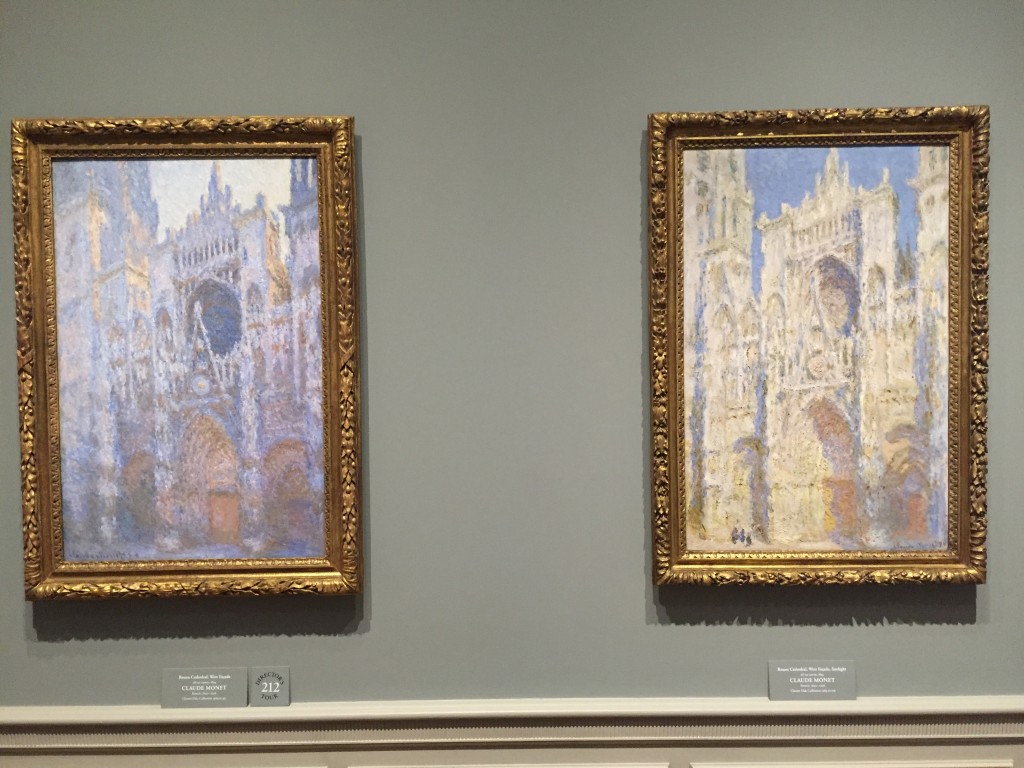 Contrast these with the actual cathedral, which I visited in late October 2015: 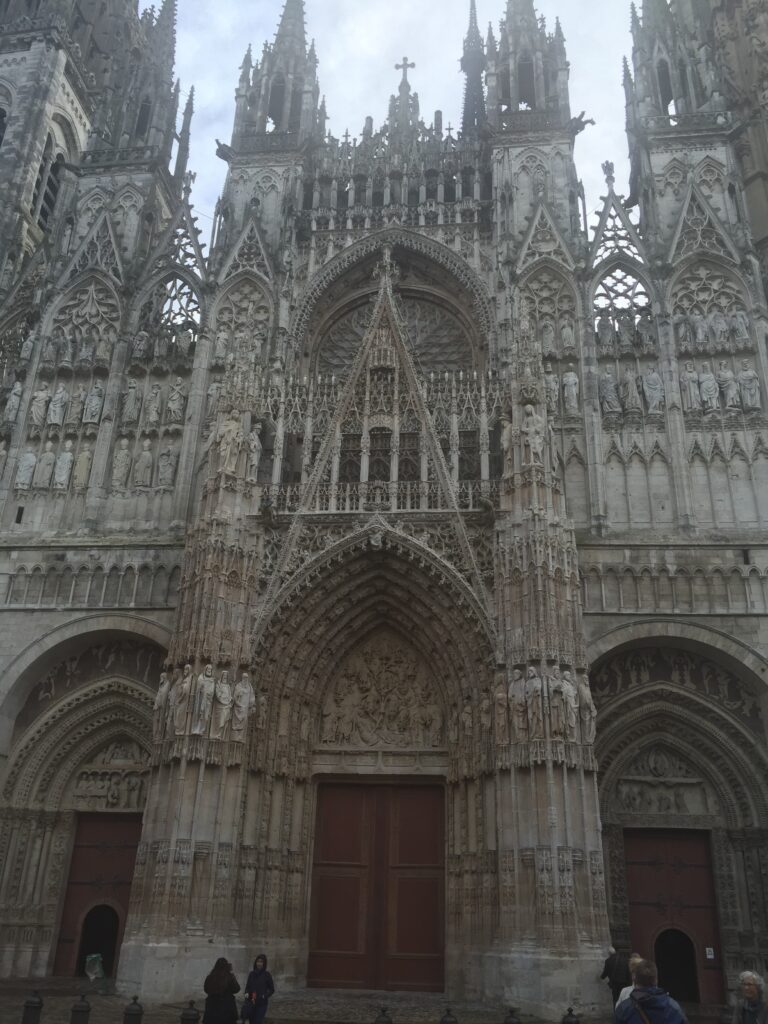 I view seriality and spontaneity as two prongs of my own practice and people wishing to use art as a wisdom teacher might find a great deal of energy and possibility in permutations of these approaches.