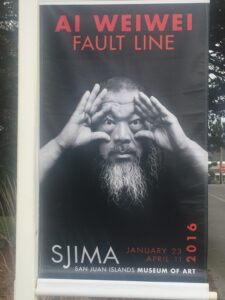 What a great thing to do on a Sunday – day trip to San Juan Island to see an exhibit of the work of legendary conceptual artist and Chinese political dissident Ai WeiWei. His story is legendary (and includes an eighty-one day detention during which he was disappeared by the Chinese government) and the story of how an exhibit of his ended up at a small museum in Friday Harbor, Washington, the island that brought you the Pig War, was a moment too good to pass up, so we put the IC recorder in the backpack, parked at the Anacortes Ferry and got on the 9am to Friday Harbor. Oh, that it was Super Bowl Sunday meant the ferries were not crowded, as USAmericans were busy gathering their piles of meat and cheese to watch grown men in kevlar give each other CTE for the glory of Jesus.

The fact that the new Director of the San Juan Islands Museum of Art is a friend, Ian Boyden, whose art is remarkable and original and whom I have interviewed before just made the visit that much easier to plan and carry out. And the walk from the ferry terminal was easy and the museum quite beautiful. 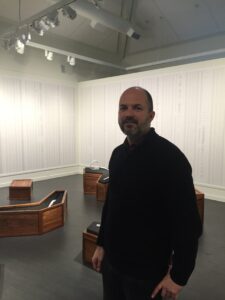 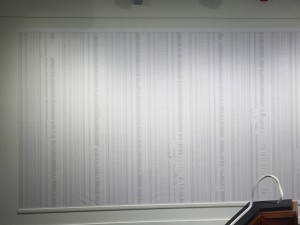 In the second segment he talked about Ai WeiWei’s commitment to human rights and about the 2008 Sichuan Earthquake which killed over 70,000 people and over 5,000 children, many of whom were in schools constructed shoddily by the Chinese government. But the government suppressed fatality information, so Boyden told of the Citizen’s Investigation Ai Wei Wei carried out to get to the truth of matters in this tragedy and collect names of the dead. He showed the walls of the exhibit which are essentially enlarged excel files of data of the deceased children. he also pointed out a screen featuring video from the Citizens Investigation with English subtitles. He also talked about the resistance the local police gave Ai Wei Wei and the investigators, administering a beating on Ai Wei Wei that resulted in a brain hemorrhage.  Part 2 – 5:24 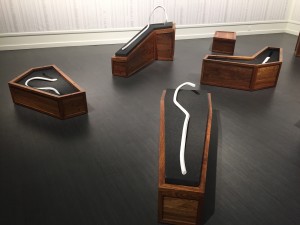 In the third segment Boyden talked about how Ai WeiWei does not see a separation between art and politics, between art and social justice and between art and his own life. Boyden also discussed how Ai Wei Wei saw all the rebar in the rubble of collapsed schools created by the earthquake and how he purchased 240 tons of rebar on the secondary market and had it shipped to his Beijing studios. Boyden called him a “material philosopher.” He talked about the Case and Rebar part of the exhibit and the construction and arrangement of the materials. Part 3 – 5:43 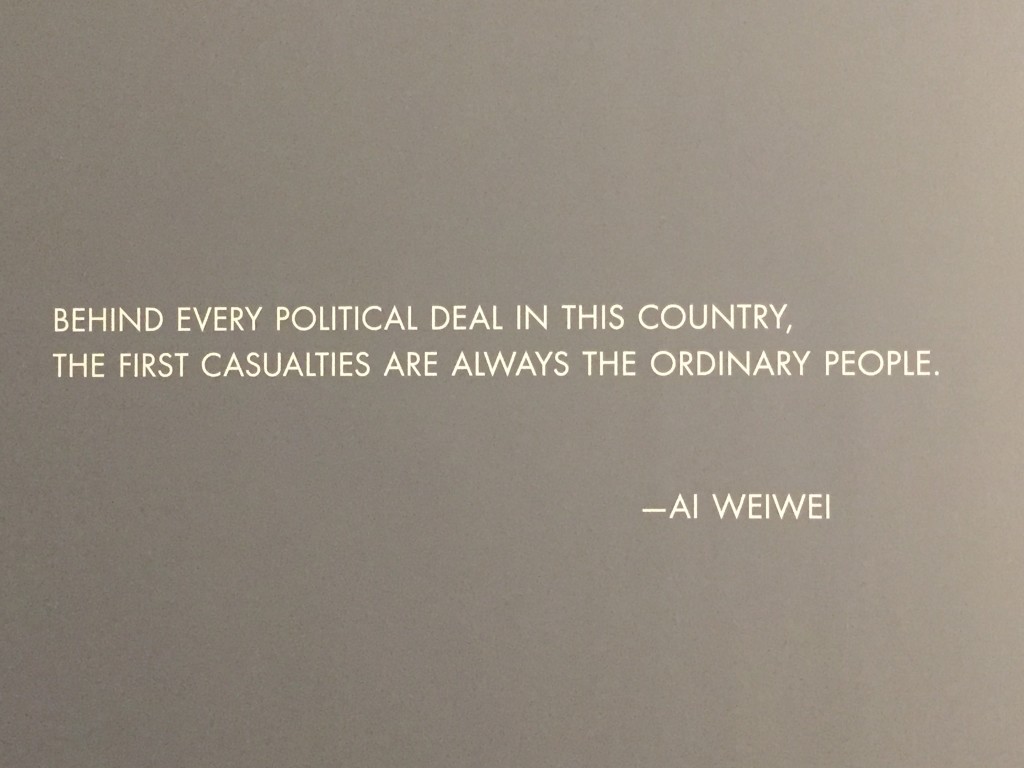 In segment four Boyden discussed how the actual exhibit was assembled, how Ai WeiWei has a Zen-like sense of democracy, which is revealed in his work and how Boyden tied Ai Wei Wei in to an exhibit of prints by the legendary Spanish artist Francisco Goya. Part 4 – 5:20 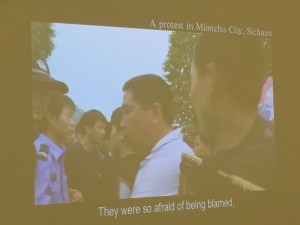 In the fifth segment Boyden addressed a question about framing Ai WeiWei’s art in the context of the conceptual art movement. He talked about the exquisite rendering of the materials in the Fault Line exhibit and how that is an example of a gesture that can’t be easily framed as a conceptual one because of the beauty of the objects involved. Part 5 – 5:14

In segment six Boyden talked about how Ai WeiWei can be so critical of the Chinese government in a country where free speech is certainly not the norm. He discussed recent shows by Ai Wei Wei and a photograph of the artist mimicking the famous photo of the drowned Kurdish refugee Alan Kurdi and the notion that Ai Wei Wei attempts to facilitate moment of empathy in the people who attend his exhibitions. Part 6 – 5:30

In segment seven he discussed upcoming exhibits including Fragile Waters, featuring photographs of Ansel Adams and others who worked in black and white and were attuned to the environment. He discussed his own artistic practice and themes inspired by Buddhism. Part 7 – 4:09. 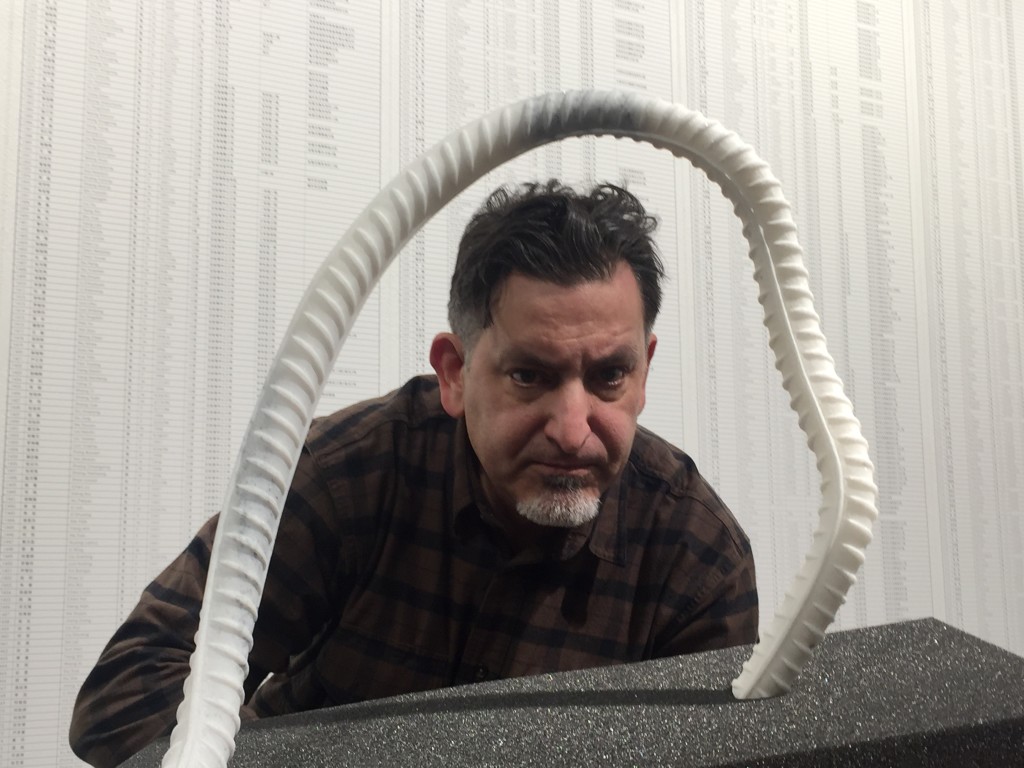 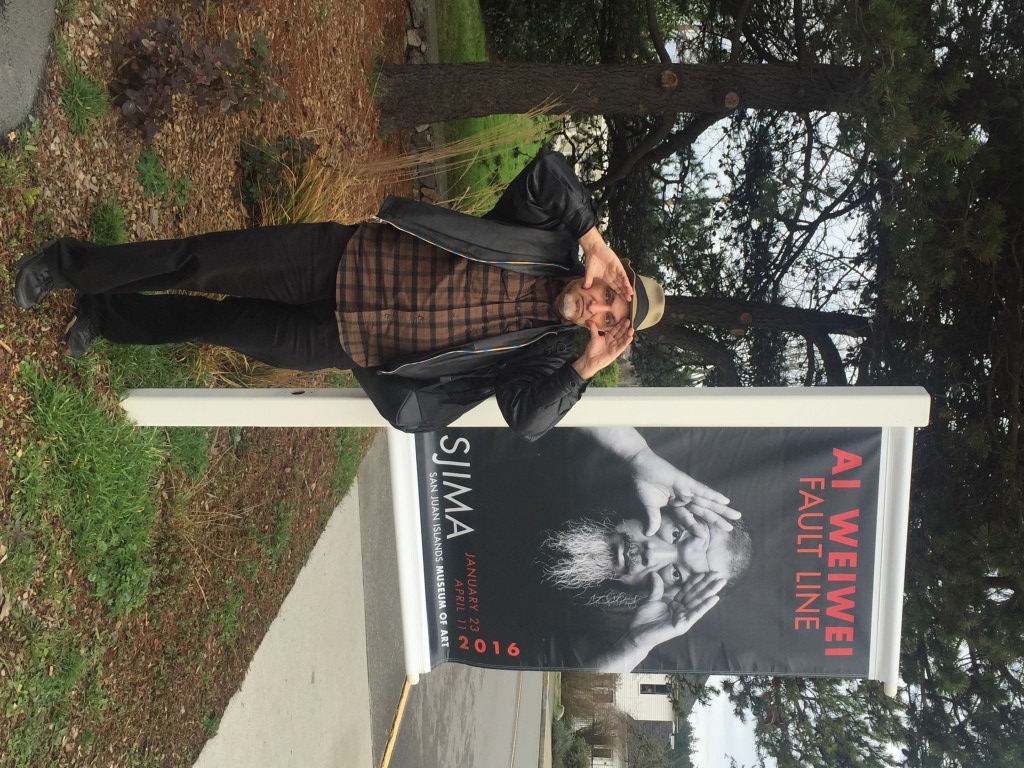 Your Humble Narrator and Ai WeiWei