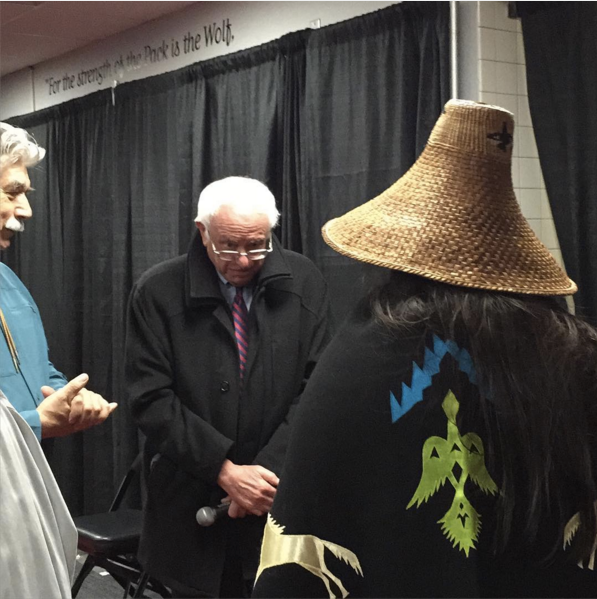 It is a quintessentially Seattle story, given that indigenous people in this city have a higher profile than in most U.S. (lower 48) towns. Maybe being named after a great Chief also has something to do with it, but given that my ex-, Meredith, found this on Instgram and the caption was:

From miranda505#: BernieSanders receiving his ‪#‎Lushootseed‬ name from ‪#‎CoastSalish‬ Tribal Leaders. dxʷshudičup (pronounced dooh-s-who-dee-choop) is the Coast Salish name given to Bernie Sanders. The Lushootseed meaning is “the one lighting the fires for change and unity.” Please share.

I am sharing it. I love how Sanders would care to have this kind of experience, love how Native elders would honor this man in this way and that they recognize he’s not just another politician, as many people have perceived. He had 10,000 inside the arena for his talk and another 6,000 outside and, as Linda Russo pointed out on Facebook:

I don’t think we’d be discussing how neoliberalism hijacked democracy if it weren’t for Hilary vs. Bernie.

It is true. And a post about that is getting ready to emerge.