Once in Blockadia: Stephen Collis Interview 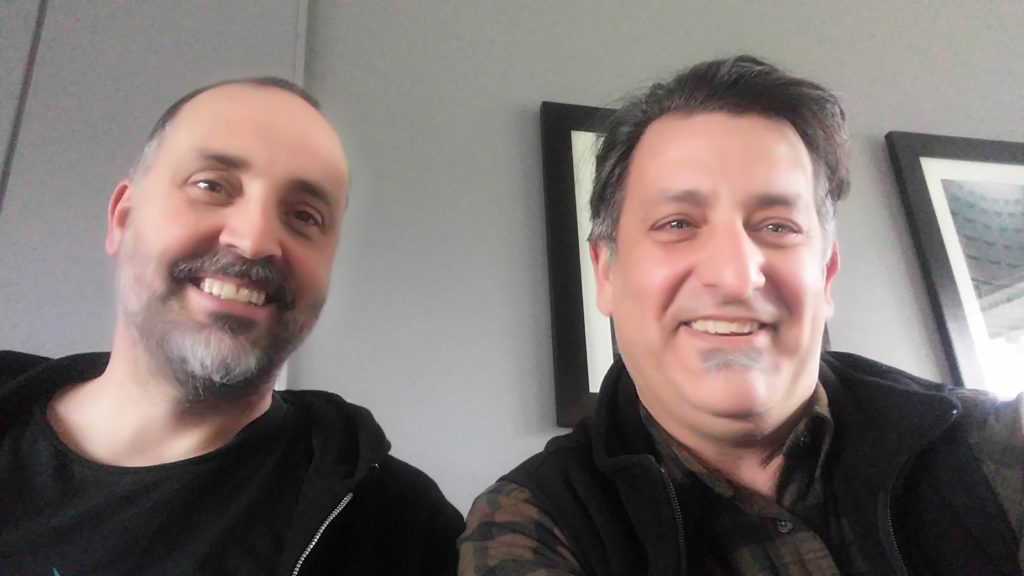 Stephen Collis and Your Humble Narrator

On my way north to the Comox Valley to assist organizers of the Cascadia Poetry Festival to be held in Cumberland, September 8-10, 2017, I stopped in Delta, BC, to interview Stephen Collis about his latest book “Once in Blockadia.” Since the book’s back blurb was so well-written, I started the interview by reading that:

Called by Eden Robinson “the most dangerous poet in Canada,” Stephen Collis was sued for 5.6 million dollars by U.S. energy giant Kinder Morgan for opposing the Trans Mountain pipeline expansion. The lawyers accused his words of bearing instruction: “underneath the poetry is a description of how the barricade was constructed.” In Once in Blockadia, Collis turns from the appropriation of the poet’s dissonant voice to the complexity of collective struggle during the unfolding crises of the Anthropocene.

Stephen Collis’s many books of poetry include The Commons (Talon Books 2008; second edition 2014), On the Material (Talon Books 2010; awarded the BC Book Prize for Poetry), and To the Barricades (Talon Books 2013).  He has also written two books of criticism and a novel, The Red Album (BookThug 2013).  His collection of essays on the Occupy movement, Dispatches from the Occupation (Talon Books 2012), is a philosophical meditation on activist tactics, social movements, and change.  In September 2013 Coach House Books published DECOMP, a collaborative photo-essay and long poem written with former SFU student Jordan Scott.

In the first segment Stephen responded to Eden Robinson’s assertion that he is “the most dangerous poet in Canada.” He talked about Kinder organ’s lawsuit against him, how their pipeline was approved by the Canadian government, but how the proposed Enbridge pipeline was rejected and the power of Indigenous resistance to that effort. He talked about Lawrence Paul Yuxweluptun, how he is a trickster and his admiration for how he toys with power. Listen to Part 1 – 6:55.

In part two Stephen admitted that Once in Blockadia is a nod to the notion of Cascadia, that he feels “incredibly located” here, connected to the climate, the kinds of trees and the rivers running down into oceans of this place where he grew up. He also said that thinking about here as Cascadia is a layer on top of what Indigenous people do and considers himself a “lifelong visitor” because he is not an Indigenous person. He encourages others to think of themselves as visitors. He read from page 17, the first part of the poem Blockadia. Listen to Part 2 – 5:47.

In the third segment Stephen responded to a quote in the book from Allison Hargreaves and David Jefferess: “The tenuous fantasy of settler belonging.”  He talked about their work in investigation Indigenous blockades of resource extraction effort and the spiritual nature of Indigenous resistance with its “inner” and “outer” components. Listen to Part 3 – 4:51.

In part four he discussed Malcolm Lowry, a writer who lived in Vancouver and in Dollarton, in a shack near the water. Lowry appears a couple of times in the book. He read a poem that is sort of an attempt to render the name of Kinder Morgan in translation from German as “tomorrow’s children.” It is a poem which mentions a “radium wolf” and he responded to a question about that being a running character in the book, by telling of how the image got into his consciousness. He cited Duncan’s notion of “follow the mistakes. They are meaningful.” Listen to Part 4 – 6:57.

In the 5th segment Stephen talked about his experience visiting the notorious Alberta Tar Sands for a healing walk and how the poet William Wordsworth had an impact on his writing about the experience. Listen to Part 5 – 6:07.

In segment 6 he talked about the found material in the book, including court transcripts, rush automated transcripts of CBC radio interview (that included the phrase “yellow dildo ports“) and how he decided to incorporate that material in the book. He talked about how Canada is not an industrial country, but a resource-extraction country. Resources go out and commodities go in and his found text replicates that pattern. He read from that transcript and responded to a notion that the way one reads his work just AFTER that passage creates a bit of an unnerved feeling, which is one of the effects some try to create with poetry. After deciding to leave it in, he found phrases from the text which provided prompts for the spontaneous lyric poems that immediately follow in the book. He talked about walking the fine line between “The Practice of Outside” and one’s own internal responses to stimuli. Listen to Part 6 – 8:00.

In part seven he responded to an Ezra Pound notion from about 1912 that poetry needs to be more than mediocre prose broken up into verse by discussing Duncan’s notion of “the tone leading of vowels” and how the music of the language becomes a guide more than syntax. It is about creating a tension between “thought and feeling and sound.” He read a piece inspired by the radio interview rush transcript: during the organ writing tradition.  Listen to Part Seven – 6:01.

In the eighth segment he discussed his poem: Home at Gasmere: In Memoriam Peter Culley. He read the third segment of the poem after a discussion of going to England and the Lake District where the poet William Wordsworth lived and how the feeling of the tar sands followed him there. He also discussed the late Nanaimo poet Peter Culley. He called him “Cascadia’s Wordsworth – a walking poet.” Listen to Part Eight – 6:43.

In the last segment, #9, he talked about his affinity for older poets and specifically, Phyllis Webb, who he has been visiting on Salt Spring Island for many years. He said knowing her is like “having instant access to the timelessness of poetry.” He discussed her twenty-five year absence from writing. feeling that “words abandoned me” and said she was a poet of Cascadia because she is so connected to Salt Spring Island which he says could be seen as the “naval” of the bioregion. He says her work is all “beaches and coastlines and trees in the wind” and “entirely a located poetry.” He talked about her time studying with Duncan (in 1964) a poet who has inspired him a great deal, is also quite meaningful to him. Listen to Part Nine – 7:51.

Stephen is one of the headliners of the Cascadia Poetry Festival, Cumberland, Sept 8-10, 2017.

Hear other interviews at American Prophets.