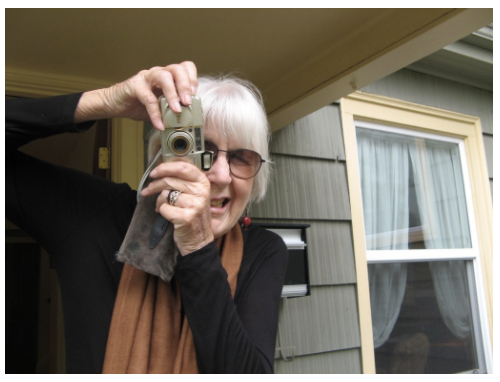 Joanne Kyger, 2014 at the Subud House/Spring Street Center in Seattle, during the 2nd Cascadia Poetry Festival. (Photo by George Bowering.)

It was with great sadness yesterday that I learned, from a brief Facebook post by Michael Rothenberg, that Joanne Kyger had died at her Bolinas home on Wednesday, March 22, 2017. No other details are known at this time and she is survived by her partner Donald Guravich.

I first met Joanne in 1998 in Auburn, Washington, of all places, at the old SPLAB thanks to Joanne’s former student Danika Dinsmore, who co-founded that project with me not long after earning her MFA at Naropa. I did a brief interview with Joanne then, which I’ll have to rescue from its storage area and decaying reel-to-reel status.  I remember asking her if all the events in one of her poems, about a bear going through a cabin and eating everything it could, including LSD, were true and she said “of course not!?!”

First of all do you remember the way a bear goes through
a cabin when nobody is home? He goes through
the front door. I mean he really goes through it. Then
he takes the cupboard off the wall and eats a can of lard.

He eats all the apples, limes, dates, bottled decaffeinated
coffee, and 35 pounds of granola. The asparagus soup cans
fall to the floor. Yum! He chomps up Norwegian crackers
stashed for the winter. And the bouillon, salt, pepper,
paprika, garlic, onions, potatoes.

He rips the Green Tara
poster from the wall. Tries the Coleman Mustard. Spills
the ink, tracks in the flour. Goes up stairs and takes
a shit. Rips open the water bed, eats the incense and
drinks the perfume. Knocks over the Japanese tansu
and the Persian miniature of a man on horseback watching
a woman bathing.

He goes down stairs and out the back wall. He keeps on going for a long way and finds a good cave to sleep it all off.
Luckily he ate the whole medicine cabinet, including stash
of LSD, Peyote, Psilocybin, Amanita, Benzedrine, Valium
and aspirin.

She had a way of being cutting and direct, as you can see in her poems, like the one in “All This Every Day.” A segment: 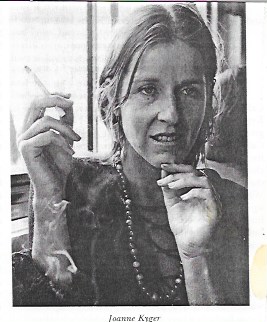 I don’t even believe
in My powers or gods

Her dying words were
Keep the house clean

And I’d get to visit her and Donald at their Bolinas home 4 or so times. It was a bear to find, given that many Bolinas roads are dirt roads with less than perfect street signs to guide visitors. Bolinas is well-known for its traffic sign antipathy. But it was worth it to see her modest “compound” of two houses and yard and envision the setting for many of her “journal” poems. If writing “journal poems” sounds simple, or easy, guess again, as a reviewer in the Chicago Tribune pointed out and which I have shared before:

Kyger’s project, however, is a great deal more ambitious than mere writing of a personal journal. She’s creating a contemporary history, fusing private and public, personal and national in ways that add up to a formidable alternative to more traditional models of historical narration. As the poet rages about the country’s political direction and environmental woes, she envelops her commentary with a peculiar mix of Zen teachings and noir-tinged humor.

That she taught journaling at workshops at Auburn-Riverside High School in Auburn (1998) and at the 2nd Cascadia Poetry Festival in Seattle (2014) was critical to understand the foundation of her writing practice, as any disciplined journal-keeper knows. That she included the lists of Sei Shōnagon is also important. Joanne wanted people to know that there are women poets from a thousand years ago who have stood the test of time and did not get their due in their own lifetimes. It was sort of a subtle feminism and explains her own situation in life, always getting the second helpings after the men have left the literary feast. This is an indictment of our culture in a huge way and like Lorine Niedecker, watch how Joanne’s own literary stock rises as the years go on without her physical presence.

And you get some sense of her humor, her experience and her wit while watching her panel contribution (starting at 5:11) at the 2nd Cascadia Poetry Festival’s “Innovations from Here” panel:

I love at about the 10:40 mark, in talking about the informal poetry workshop that she attended and which included Robert Duncan, Jack Spicer, George Stanley (who was also on this panel), David Meltzer and others, she says one of the put-downs Spicer would use for a poem would be: “you could publish THAT in the New Yorker.” This is something I’ve heard Michael McClure use about poets for whom he did not care.

I watch her portion of the panel again and see how she described the connections between San Francisco and Vancouver, suggested that that stance-toward-poem-making “trickled down” to Seattle (which in large part it has not) and how that’s a huge part of what I find inspiring about poetry from the West Coast of North America and what I seek to encourage as a “Cascadian” poetry. She was at the core of it and we can learn a lot from her example and from the lifetime of work she left to us. “What a gift” she said of my book A Time Before Slaughter. What a gift to the people of Auburn she said. What a gift to human beings and culture her life and work has been. I miss her so much already and her Zen training would serve us well in going through our grief.