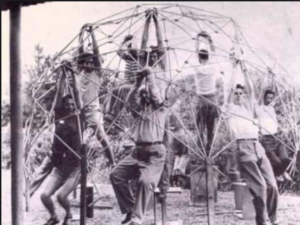 Most of the LANGPO vs. Black Mountain poetry war was fought before I was invested in poetry, so I have done my best to catch up, but a recrudescence has emerged thanks to Dispatches, a website dedicated to poetry and connected to people who made the Resist Much/Obey Little anthology happen. (Disclaimer: They published one of my poems in that book.)

And here is the beginning of the post which warmed up the feud again: 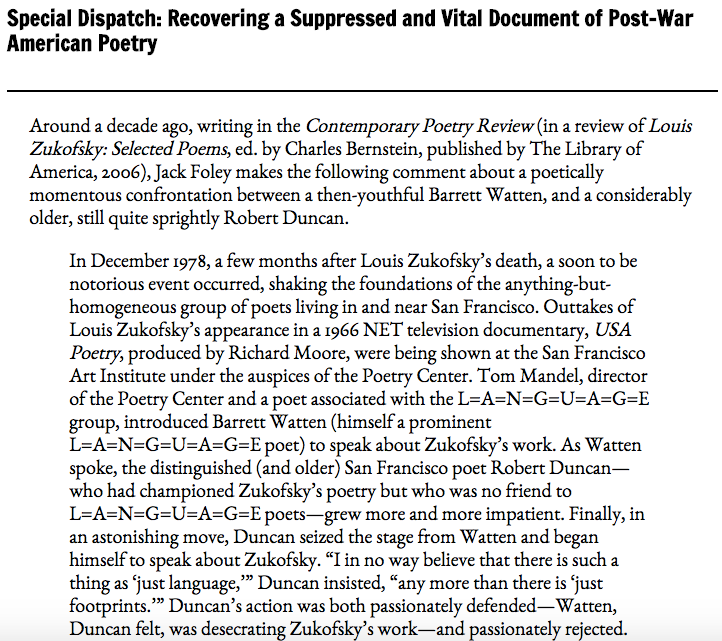 It was interesting to watch the dialog on a recent Facebook post, with one of the primary combatants from that 1978 event making fun of the other’s penchant for myth and crystals and then deleting his comments! An M.O. quite like the one that would prevent release of such an audio clip, even 39 years after the fact. Just past the segment copied and pasted in above, the Dispatches post refers to LANGPO as: “i.e. materialist, neo-Marxist inflected formalism…” which I think sums it up well. This take is similar to Ammiel Alcalay’s comments in his excellent book on Charles Olson A Little History:

While “deconstruction” has been the reigning theoretical rage in academia, driven by fantasies of rendering Western culture powerless through critical discourse, projects characterized by construction, reconstruction, and historical recuperation provide people with real political footing.

In that book Alcalay has a wealth of insight into Charles Olson and projectivism in general and it’s been my feeling for a couple of decades now that there is so much with this stance toward poem making that can be done. We’ve only scratched the surface. Now is a good time for more experiments with projectivism given we’re witnessing the last gasps of LANGPO and its step-child Conceptual poetry, which killed itself rather well at Brown University over two years ago. Of course, there are probably a lot of poets quietly working on “multi-decade research projects” or “saturation jobs” as Olson called them. Perhaps we’ll see their emergence.

I went with an open mind a couple of years ago to see another LANGUAGE poet read at a local university. Charles Bernstein was reading in support of his book “All the Whiskey in Heaven” a 30 year retrospective of his work. And he read that afternoon chronologically, with great wit and humor. I especially enjoyed his sound poetry, which sounded slightly German as I recall. I also noticed his eye contact. In the first half of the reading, he was looking up over the heads of the gathered as he paused between stanzas. It was only in the second half, in which the material shifted to poignant poems about his daughter, who died from a suicide, that his eye contact was with actual eyes of the gathered students and other attendees. This was very touching material and I thought it unusual for such emotional content to be coming from a LANGUAGE poet. But the form that was used to convey this material was very conventional, formal verse. I imagine now that “Official Verse Culture” (a Bernstein term regarding the poetry powers-that-be, grant-givers, publishers &c.) is fully in the free verse mode (and not open form, but usually prose chopped up into line breaks), writing formal poetry can be seen as renegade? (Avant? Post-Avant? Post-Post-Avant? PostToasties?) It seemed to me a pity though that writing from powerful emotional states, for which Projective Verse is well-suited, and the more human approach with eye contact, was relegated to formal verse as if that was the only way the poet knew how to render such material, having decided against developing a projective praxis over the years.

Yes, it is a risk to relate actual feelings, deep emotional vulnerabilities, in one’s poetry. How can we do it with intelligence, originality and innovation? Questions like these were abandoned by LANGPO and Conceptual Poetry, but it is clear with the breakdown of capitalism, the climate and the U.S. democracy that poetry should endeavor to be a little more than a disembodied academic parlor game. Perhaps the release of the 1978 Duncan vs. Watten audio will shed some light on how the wrong turn was made in North American poetry.