In the car we listen to music almost exclusively on the old Ipod, which has remnants of the previous user’s musical tastes. (Thanks Rebecca!) Were it to be passed down again, and were the new owner to leave traces of MY audio excursions, there will be a great deal that seems obscure. Not just the music, with everything from the Art Ensemble of Chicago to Led Zeppelin to Wally Badarou, Keith Jarrett, Joni Mitchell, Carla Bley, the Dead Kennedys, Star Anna, Radiohead &c &c, but audio snippets from interviews with poets such as José Kozer on serial form. 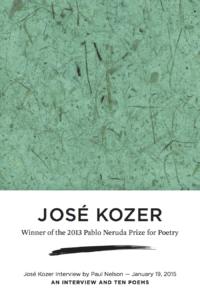 It came up last week, the mp3 segment from the 2015 interview I did with Kozer at his home in Hallendale Beach, Florida. It is represented in the book Tiovivo Tres Amigos, the book of the interview transcribed along with Kozer poems translated by Amalio Madueño. Here is part of it:

NELSON: There’s something very interesting in Anima which, as I was reading it the first time, it struck me and as I read it again, it strikes me. I’ll read from the introduction or from the prologue. “A 60-year old man writes a poem and entitles it Anima. Days later he writes another poem with a tone similar to the first and titles it Anima, then realizes he has just begun a series which must all bear the same title. Furthermore the man decides that in the future, ’til the day of his death, he’s going to continue writing poems that, since they have the same tone, will be titled Anima.” And then he’s got a book and you use the word “series” in there. And, of course, I’m very interested in the serial poem and I interviewed Nate Mackey about that and his thoughts about it were very profound. He said, “This is the most open form that human poetry has ever created. It’s the serial poem.” Robin Blaser called it a “narrative of the spirit,” which to me sounds very much like what your situation is with your writing, and your chronology of your life, and your study, and what have you. So, how familiar are you with the serial poem as espoused by those west coast writers like Duncan and Blaser and Mackey and others, the TISH Group, Bowering and Daphne Marlatt, and how do feel about comparisons to that?

KOZER: Basically, I don’t know them. Basically, I’m not even aware they wrote serial poems. I began doing this out of a problem, a personal problem. I can write a poem in 20 minutes, 30 minutes, as I have told you. Not that it’s simple, but it gets done. My most difficult issue with poetry is the title. Titling a poem drives me absolutely crazy! I may finish a poem, I still don’t have a title and it may take me fifteen minutes to find the title. It may come or it may come in the middle of the process of creation. So at one point, when I hit on the idea of the series, I realize that if I get to a moment in my poetry where I have 20, 30 series, then I could fit certain poems and I’m writing in some of the series. By now I have about 50, 60 series, different ones, some of them like Autorretrato may have 500, 600 poems in it. There’s one which is called Un Día Feliz (they are publishing soon in Chile a new book of mine entitled Un Día Feliz) and there may be 120 poems like that. Anima, I remember at one point I had about 360 poems that were entitled Anima. Then the series also begin, expand, grow, and die out. Some return, are recurring in my poetry. So to be honest, it all began like a little game. Oh, I found a way of solving the problem with titling. I can just fit the poem into a given title that pertains to the series and forget about what title I want to give to this poem. But to be more serious, I think that my concept of a poem is incompleteness. The poem itself, when it’s finished, no matter how successful or unsuccessful it is to me, it is never a completed poem. A poem is always open, even though it’s closed at the end, to continuity. It’s, for me, a strategy easy to pursue to take a point in a poem that I’ve already written, even publish it and departing from that moment in that poem, write another poem so that they are linked, they are, series-wise, they are somewhat formulated a priori. They exist unto themselves. There’s nothing to be forced as to its continuity. It dies out because, technically at one point, you’ve said so much and you cannot give anymore to that series, but it doesn’t mean that the series is dead. You’re dead, if you wish. So that when I write an Anima here, and it’s finished and I know when a poem is finished… as a matter of fact, when a poem of mine starts, I don’t know anything. What words I’m going to use, what topic is going to be in the poem. The only thing I know from the very beginning is the structure of the poem. I see it immediately and the structure also is the size of the poem. So that when I start a poem and I get to a certain point, size-wise, I know that’s finished. It doesn’t mean that the poem is finished. It means that this poem has ended. But it has enough material in it for continuity and there comes the series. It allows for 2 things: one is spiritual, one is technical. The spiritual is the humility to recognize that no matter how good a poem is, it is always deficient because it is incomplete. Technically it is also important to understand this because one poem feeds the next, just like you’re hungry, you eat, you digest, and the digesting feeds the next state of hunger. So that, this is life, this is the continuity of life. Yes, you die and you’re finished, you’re through. I don’t believe there’s anything else after you die but there is continuity. And I don’t mean continuity in terms of fame or glory or you being William Shakespeare. No! This continuity in terms of, you decompose and you become a plant and the plant becomes food, and the food becomes an animal, and the animal… you know? It’s continuity in nature. So that in any poem, in any form of creativity, there’s always enough material for it to disperse itself, continue, provoke itself onto new forms. Then also, the possibility of branching out which excites me and I see that I’m using, theme-wise, even language-wise, something that I’ve used before. I’m insisting, not out of a shortness of breath or out of lack of capacity, but rather because I’m testing some waters that I sense can be enriched, that I sense can bring forth new ideas, new words, new… even new worlds. . .

When Kozer talks of writing a poem in 20 minutes, he’s talking about an incredibly open and focused form of concentration, something which is getting more and more difficult to achieve in this world of rampant technological notifications. Yes, it’s spontaneous, though Kozer is not a fundamentalist regarding revision, but he does it properly, with a light touch the day after composition and moves on to what’s next.

An impersonal voice is achieved when composing projectively. This itself leads the poem to deeper consciousness than most poetry being written. The annual August Poetry Postcard Fest was designed in part to allow participants the thrill of having the experience of witnessing a poem being written through them. Adding seriality to the mix (and writing 31 poems within 56 days in summer lends itself to a kind of inherent seriality) only deepens the gesture.