Notes on The Undercommons 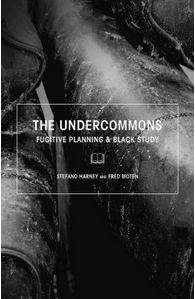 Nate Mackey tipped me off a few years ago to the work of Fred Moten and few months ago I came across a New Yorker article about a book Moten co-wrote with Stefano Harney entitled: The Undercommons: Fugitive Planning and Black Study. I saw reference to it in Brenda Hillman’s last book and had an intuitive hit that now was the time to read it. I started last week and finished here in Door County where I am wrapping up my 2019 residency. I can’t begin to articulate how validated I feel by reading this book; how long I have waited for someone to articulate how I have felt not fitting into institutions; hating the office politics that gets played, watching the ongoing rewards to the mediocre in our culture.

Then here comes this book and as I start to read, it is mentioned in several panel discussions at the recent &Now Convergence at UW Bothell, with one panelist saying it was THE book being discussed there. I am not up for a comprehensive review of the book, as I am sure there are more capable critics than me. What I will offer are some notes on some of the notions in the book with the caveat that I identify as a member of said Undercommons.

From the introduction by Jack Haberstam: [Frantz] “Fanon, according to Moten, wants not the end of colonialism but the end of the standpoint from which colonialism makes sense” (8). This is what is called a radical thought. It is related to the roots of a situation and goes so much deeper than the radicals we see in the neighborhood who are quick to protest something, but rarely create anything. It is the kind of thought I sought for my syndicated radio show that lasted about ten years, much of which is archived at my American Prophets interview landing page.

“But certainly, this much is true in the United States: it cannot be denied that the university is a place of refuge, and it cannot be accepted that the university is a place of enlightenment” (26). Later in the book he and Harney would say that because they first saw this, let’s call it a neoliberal haze, that’s where their critique started; where they understood the need to articulate what they call The Undercommons, or the notion that study is what we do with other people, at the barber shop, the nurse’s smoking lounge, or old men sitting on a porch. Moten says later in the book that it is study because there is “incessant and irreversible intellectuality” happening in these places.

It is on the very next page (27) where the phrase “the prophetic organization” comes in and, of course, I wanted to see SPLAB in that context. We have existed for 25 years despite the subversive nature of our content, of the radio shows, of the stance-toward-poem-making (projective, spontaneous, organic, impersonal, which is a method that gives room for the prophetic) and the cosmology that underpins that to which Moten alludes. The members of this class of people are considered by the university, Moten says, as: “uncollegial, impractical, naïve, unprofessional” (28). It is a kind of professionalization that confronts “any attempt at passion” (35). He writes, in a sub-chapter entitled: “Professionalism is the Privatization of The Social Individual Through Negligence” that public administrators, including people in public health, environmental management, non-profit and arts management and “the large menu of human service courses, certificates, diplomas and degrees that underpin this disciplinary cluster. It is not difficult to see that these programs exist against themselves, that they despise themselves. (Although later one can see that as with all professionalization, it is the underlying negligence that unsettles the surface of labor power.)” (35). SPLAB has existed as an alternative to the neoliberal “ethos” that has hypnotized this continent since the late 70s. Since before we even knew what neoliberalism was.

I could go on quoting from the book extensively and offering my immediate responses, but sense I should get to the meat of it at the risk of skipping many more salient points. On page 96 he calls this resistance that is at the heart of The Undercommons an “appositionality” and wonders if this could be the place “from which emerges neither self-consciousness nor knowledge of the other but an improvisation that proceeds from somewhere on the other side of an unasked question?” (My emphasis.) Here is a notion near and dear to my own heart. My own poetics are based on this for many reasons. My love of Jazz is because of its improvisational nature and the feeling one gets from deep immersion in the moment. It’s the key to the projective/organic/impersonal stance toward poem-making because it allows us the opportunity to be a medium for forces greater than ourselves. It is why this poetics IS a cosmology, because it is a way of being guided. One only has to clean up their own intention and surrender to that larger force, trust in language which has a greater field than any individual, trust in The Muse, however one defines that, trust in the ancestors, genetic or poetic, trust in the Divine life force, the Collective Unconscious, the Great Mystery, The Single Intelligence (as Olson put it) in any number of ways you can articulate or imagine it. These are MY notions extrapolated from Harney and Moten’s mention of improvisation, but these are my notes and they (I think) would be pleased to read this validation of this thinking with this illustration. One of the best concerts I ever saw was Fred Anderson, Hamid Drake and William Parker at the Rainier Valley Cultural Center, October 29, 2001. Two sets of 45 minutes each, completely improvised with Anderson on tenor saxophone, Parker on bass and Hamid Drake on drums, including a frame drum. After the show, in an altered state, I asked Drake where the force came from that made this concert so remarkable and his answer: “Wasn’t me. Was the Holy Ghost.”

The book ends with resources/sources and before that a long interview which is helpful to better understand the concepts thrown out, but the ending sub-chapter is entitled: Hapticality. “The touch of the undercommons, the interiority of sentiment… the capacity to feel through others, for others to feel through you, for you to feel them feeling you… we hear the godfather and the old mole calling us to become, in whatever years we have, philosophers of the feel” (98/99). I read this as a call to resistance and compassion; to action.

I had not read that when I suggested The Undercommons as the name of a literary salon I intend to create with Matt Trease, Courtney Hudak, Saundra Fleming and others interested in pursuing ongoing study on the first Mondays of the month at 6:30pm. I envision this as lively, supportive, compassionate and intimate. I see it as a group that actively supports the individuation of all attendees. It starts October 7.

2 Responses to Notes on The Undercommons