This is an update of the post that was used to promote the Zoom reading of the 1995 poem Dolphin Skull by Michael McClure. It was recorded 12N, Tuesday, October 20, 2020. My thanks to Amy Evans McClure for permission to post the tribute online. 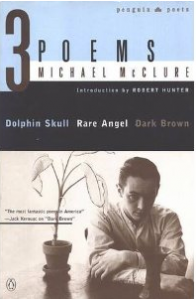 I met Michael McClure, the legendary Beat/Black Mountain/San Francisco Renaissance poet/essayist/playwright in October, 1995. We conducted an interview for my syndicated public affairs radio interview program. I have written many times about that encounter such as in THIS POST which I wrote in honor of Michael’s 80th in 2013. (That link also includes audio of that 1995 interview. See also THIS POST and THIS ESSAY.) He died on May 4, 2020, and would have been 88 on October 20, 2020.

What to say about McClure that I have not already? Via Zoom at Noon on October 20, 2020, I will read the Introduction, Author’s Preface and the first poem in the book he was touring with on that October day in 1995 in Seattle, Three Poems. That poem is “Dolphin Skull” and it is doubtful any other poem I will ever encounter will change me as a human being the way this one did.

I hope those registered for the two Poetics as Cosmology courses I am facilitating this Fall will attend, if only to understand how deeply McClure epitomized this notion and to see how it influences me.

I wrote this in the Tod Marshal workshop at the 2017 Cascadia Poetry Festival in Tacoma:

The spring, just before the thirteen switchbacks that provide most of the elevation gain on the trail to Appleton Pass, is the last chance for water unless you call Oyster Pond potable, and it is early in the season says the ranger who issues our backcountry permit 22 years later. At the Pass itself where once-bearded me was pictured, at 5,000 feet and higher, on a bluff overlooks the path we just hiked through and saw bears (“well, blow the whistle” “no, YOU blow the whistle) and mercifully no goats seeking our salt.

And day three once there my Denny’s-fed meat-eating white guy friends from Chicago just wanted a rock on which to sit and toke, but I climbed higher with my new copy of Three Poems and see the words capitalized down the center of the page:

And this by now as much of my own essence as the author’s and the lines that follow’d aid seductions and have themselves the smell of an ancient hemlock, cedar, pine forest, reality as it ought to be, air as it ought to be, windows into the association chain of a poet whose own work exuded a “hunger for liberation.” Liberation is easier in the ancient woods where the tweets are reserved to actual birds and no one is idling their engine looking at Facebook, or NFL scores. And you think about lunch and your own innate divinity has a clearer channel to the part of you that does not rot and maybe back then a fire, and always a thought about the next meal.

On a rock, in Schoeffel Creek waiting for a military helicopter, doing laundry to prepare for the expected media inquiry, it was polenta with purple cabbage and butter cooked with creek water that may not have required a filter and the Sergeant-brought Evian.

A couple of years ago I published an essay outlining how McClure’s use of Projective Verse was going to be the “spiritual legacy” of the Beat Generation. I think Gary Snyder’s life and work is quite comparable, but this is part of what I was getting at with this particular essay on McClure:

“The fashion of Zen … is a symptom of western man’s desperate need to recover spontaneity and depth in a world which his technological skill has made rigid, artificial and spiritually void.”
–Thomas Merton

Although the velocity of our time makes the quality of our decades seem much shorter than in past eras, it will likely be the twenty-second century before an accurate summation is available on the mid-twentieth century literary movement known as the Beat Generation. While Allen Ginsberg’s poetry, poetics or cultural activism; Jack Kerouac’s prose, poetry and his method of composition; Gary Snyder’s environmental and Buddhist consciousness and bioregional ethos, or the opening made by the Beats for Eastern spirituality in the west are of intrinsic value and will be for generations, this paper seeks to posit that it is Michael McClure’s use of Projective Verse, that future generations of writers and readers will come to appreciate as that movement’s spiritual legacy.

Projective Verse is a method (a suggestion, McClure calls it1) offered by Charles Olson in 1950. Olson is most often associated with the Black Mountain School of poetry, based on his tenure at that iconic educational institution and the inclusion of his work in the Black Mountain Review, the seminal publication associated with the college. His use of Alfred North Whitehead’s philosophy allowed him to create an organismic (non-mechanistic) method and McClure has perfected it better than any other poet has in over fifty years of practice. READ MORE