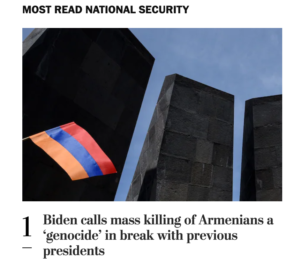 I was delighted to hear that President Biden announced that for the first time in history the United States recognizes the Armenian genocide perpetrated by Turkey in 1915. See:

I had the good fortune to interview Peter Balakian in 2004 about this horrific event:

The Armenian Genocide and America’s Response

& hear that the Turkish government may respond by saying the U.S. government committed genocide against Native Americans, which is rather evident and should be discussed and rectified.

For a little Armenian culture dig: