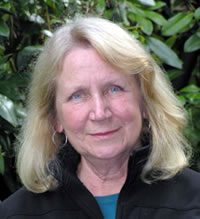 Kathleen Dean Moore
Evolution of Philosophy — Reconnecting to the Natural

hear a clip from this interview

Get the Flash Player to see this player.

The former Chair of the Philosophy Department at Oregon State University, Kathleen Dean Moore, is the author of The Pine Island Paradox, a collection of essays about her experience and thoughts about the natural world. She discusses the disconnection to nature inherent in Western Philosophers like Rene Decartes and how the limits of that thought is endangering all the systems that make life on the planet possible. In part two, she covers the transcendence of that philosophy, such as the removal of large power-generating dams.

Kathleen Dean Moore is an essayist, philosophy professor, activist, parent, and author or editor of ten books, primarily about our cultural and spiritual connections to wet, wild places. Her first book of nature essays, Riverwalking: Reflections on Moving Water, is set on Oregon’s wild rivers. The rocky intertidal edge of the sea is the setting for the essays in Holdfast: At Home in the Natural World. The Pine Island Paradox, which begins under the cold salt sun of southeast Alaska, makes the case for an ethic of care based on the kinship of all being. The books have won the Pacific Northwest Booksellers’ Award, the Sigurd Olson Nature Writing Award, and the Oregon Book Award. Her forthcoming book of essays, Wild Comfort: A Book of Healing, will tell of the wild Earth’s power to move us from sorrow to courage and hope.

Moore has written about nature and culture for magazines such as Orion, Audubon, Discover, The Sun, and the New York Times Magazine. She serves on the Board of Directors for the Orion Society and for the Island Institute in Sitka, Alaska.

Moore is Distinguished Professor of Philosophy and University Writer Laureate at Oregon State University in Corvallis, where she teaches environmental ethics, Native American philosophy, and a field course on the philosophy of nature. She is the author of several critical thinking textbooks and a study of the ethics of forgiveness, Pardons: Justice, Mercy, and the Public Interest (Oxford UP), selected by Choice as an “Outstanding Academic Book” of the year. She publishes about environmental ethics and moral reasoning in academic journals such as Conservation Biology and the Journal of Forestry and in books about the management of forest and ocean resources. She is co-editor of three new anthologies: Rachel Carson: Legacy and Challenge, In the Blast Zone: Catastrophe and Renewal on Mount St. Helens, and How It Is: The Native American Philosophy of V.F. Cordova.

At OSU, Moore is the founding director of the Spring Creek Project for Ideas, Nature, and the Written Word. Its mission is to bring together the practical wisdom of the environmental sciences, the analytic clarity of philosophy, and the emotional power of the written word to re-imagine our relation to the natural world. This is the base for her work as a public speaker, educator, and activist, convinced that we have an obligation to leave to the future a world at least as rich in possibilities as the world we inherited.

Moore lives in Corvallis, Oregon, with her husband, a biologist. They have two grown children — an ecologist and an architect. Moore writes in the WaterShed, a tiny writers’ studio that her daughter designed to gather water from the roof and pour it past the door into a trough where deer come to drink.

BACK TO ARCHIVE INTERVIEWS HOME