I checked mail yesterday and Michael McClure’s package came. It was an original copy of Jargon 20: Passage, published in 1956 by Jonathan Williams. I immediately sat down and read the whole book except for For The Death of 100 Whales which I know well. The first poem is simply called

Linked part to part, to to knee, eye to thumb
Motile, feral, a blockhouse of sweat
The smell of the hunt’s
A stench,   …my foeter.
The eye a bridegroom of torture
Colors are linked by spirit
Euglena, giraffe, frog
Creatures of grace – Rishi
of their own right.

As I walk my legs say to me ‘Run
There is joy in swiftness’.
As I speak my tongue says to me ‘Sing
There is joy in thought,
The size of the word
Is its own crabbed flight from crabbedness.’

And the leaf is an ache
And love an ache in the back.
The stone a creature.

A pale tuft of grass.

The other poems in the book are Point Lobos: Animism, The Mystery of the Hunt, Night Words: The Ravishing and The Breech, ending with For the Death of 100 Whales. 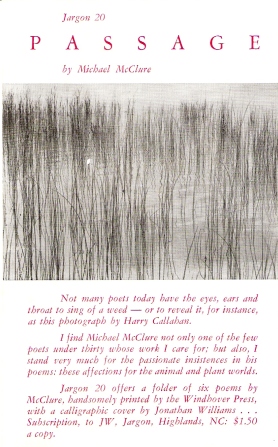 This era of McClure’s work predates his decision to center all poems on the page, a radical act in the late 50s. In 1956 McClure turned 24. How someone that young could have perception this deep is remarkable. Already tracking concepts like animism and the cosmology inherent in seeing everything as without proportion. And that perception has deepened over the years because his latest work is as energetic and inventive as anything he has ever written. He turns 80 in October 2012.

This gift came as a thank you for my introduction for the re-issue of Specks which Talon Books of Vancouver is publishing in 2012.

He’s a true visionary and has been one of my poetry heroes and teachers. 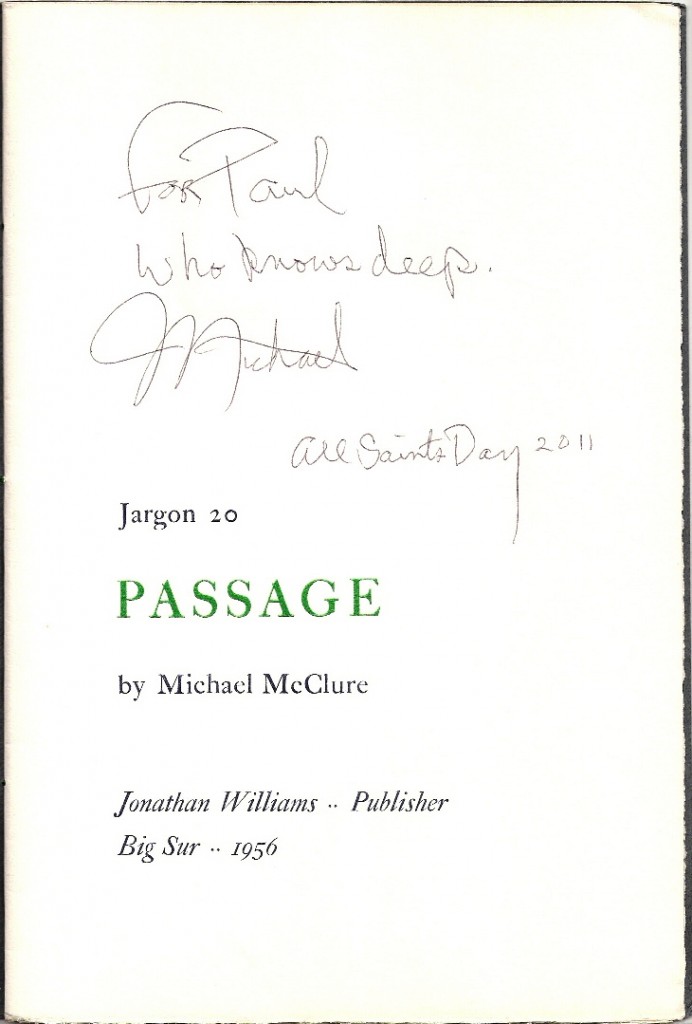