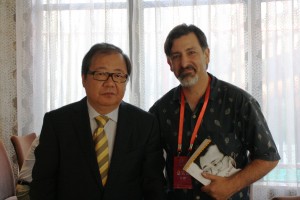 It is awkward to write on this day that my country’s President, for whom I wept on Election Day 2008, is signing into law a bill which allows any U.S. President to label someone a terrorist, eroding yet another constitutional right. Perhaps there is a “crazy-like-a-fox” bit of logic that escapes me in this affair, but as a writer who appreciates freedom of thought, my subject matter today is either ironic, or indicative of the global situation in which we find ourselves.

And as the effort to re-elect President Barack Obama, or replace him, grinds on through endless soundbites, spin and a complete misrepresentation of language as it was designed, I sit here ruminating about a political leader half a world away who happens to be a poet. This man writes:

I write poems, because I think human understanding is not empty talk; it     requires us to open our arms and give love. To show concern for people’s     fate, if only by learning about a small tribe in depth, makes us more     human…

and elsewhere in that same poem:

I write poems, because at times I am likely to be a target of widespread     attack.

The poet, statesman in question is Jidi Majia. He served for four years as Lieutenant Governor of Qinghai province province in Western China before his current posting as Provincial Minister of Information. The man behind the Qinghai International Poetry Festival, which I attended as a guest of the Chinese government this past August.

When I think of the use of political language as attempt at obfuscation in the U.S., the first image that comes to mind is 1982 and Ronald Reagan’s use of the word Peacekeeper to describe the MX intercontinental ballistic missile. Jidi Majia’s work is a world away from that kind of language use and the juxtaposition to me is striking.

Poets in the United States are beneath contempt; they are summarily ignored. Perhaps during World War II when Ezra Pound was charged with treason over his pro-fascist broadcasts, if he’d have been shot, poetry would have taken a different tack, but the advent of TV (& the industry-generated-culture it helped enable) just after that time probably erased poetry’s cultural potency or potential, or delayed it a few generations.

In China my experience as a poet was quite different. I was treated with a respect and ceremony that at times was a little much. Perhaps I could get used to it, but to be flown overseas, put up in a four star hotel and accorded an audience made up of international poets was quite an experience. Contrast that with the spending priorities of a country where people regularly are bankrupted over their heath care bills and student loan debt has eclipsed credit card debt1.

Jidi Majia is an indigenous man of the Nuoso tribe in Sichuan, where he was born in 1961, a few months before me. An officeholder in the Qinghai Provincial People’s Government, he is President of the China Minority Literary Association and Permanent Vice-President of the China Poetry Association. All attendees of the Qinghai festival were given a copy of his latest book, translated into English by Denis Mair and simply entitled: Poems by Jidimajia. So, add it up: an indigenous man, who has risen to high office in the Chinese People’s Government and also is an award-winning poet. It’s as if Sherman Alexie became Governor of Washington State. (Not a bad idea, now that I think about it.)

Another line in the poem mentioned above:

I write poems, because I keep wanting to find my lost jews harp in the noisy     dance halls of the city.

I mention that line because of a poem earlier in the book entitled The Old Jews Harp Maker. That poem starts with an epigraph:

Whose jews harp is making these flashes in sunlight, that so resemble a     dragonflies wings?

I am not sure what the specific cultural significance of the dragonfly is to the Nuoso people. In various cultures it has represented swiftness, immortality, regeneration, activity, Summer, instability, weakness, unreliability and other qualities.

In part 4 of this poem, Jidi Majia connects it deeply to his people:

Later in the poem Jidi Majia suggests that without the dragonfly, the land would be desolate. Perhaps this is a reference to the immortality the dragonfly represents in some cultures. That he thinks of the Mississippi in the poem is a nod to the U.S. and likely the literature that made it famous around the world; perhaps Tom Sawyer and Huckleberry Finn. For someone who writes in a poem that he writes poetry because he “was aware of death very early” we might be able to see how he could see such importance in the dragonfly and work to bring all world cultures together through honoring their poets, as he has through the Qinghai Poetry Festival and the Qinghai Lake Wall of Poetry, which honors Du Fu, Walt Whitman, Mahmoud Darwish, Langston Hughes, Guo Muruo, William Blake and many others from all around the world. A brush with death will do that to you.

Poetry is a calling, suggesting that there’s often little choice in the matter. Peter O’Leary called it a Gnostic Contagion when referring to Robert Duncan. Jidi Majia sees it as a bridge to peace and understanding.

When we see the occasional lapse into abstractions or sentimentalism in his poetry, we are reminded that the Romantic, Modern and Post-Modern eras hit China after the Cultural Revolution and they have had only 30 years to assimilate it all. When we compare him to his counterparts in the United States, who ofter come to see authentic culture and intelligence as a liability, his activities are refreshing. The amount of disclosure in this one book would be a goldmine for opposition research, now a necessity for major election campaigns in the U.S. For Jidi Majia, it is part of his role as a poet, one he obviously takes quite seriously. Long may he enjoy the sound of the dragonfly.