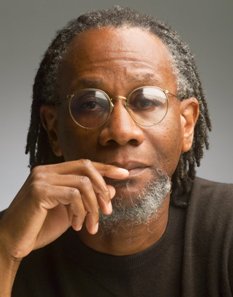 In the first part of my latest (8.24.12) interview with poet, editor, essayist and novelist Nate Mackey, he discussed the serial poem, the open nature of it and how the poem itself guides the composition.

In part two he discusses one of the main themes of his latest book of poems Nod House, the notion of “what soul was” or the effort to find meaning in one’s life, which he does through poetry.

All segments will be linked from this page: https://paulenelson.com/nate-mackey/

Here is my introduction to the latest chat with Nate Mackey:

The blurb calls the poetry an astonishing confluence of music and meaning unprecedented in American Poetry.  And while the music is evident just picking up the book and reading a line or two, or best: hearing it in the author’s voice; the poetry’s meaning is rich with allusions to the end of the American empire, the notion of past lives lived on lost mythical continents, in a play-by-play account of what it might be like in the effort to become fully human, all done in the serial manner in which the narrative of the spirit is revealed in the act of writing.  The blurb is on the back of Nod House, the latest book by poet Nate Mackey, published by New Directions.  A professor for many years at the University of California-Santa Cruz, he now teaches at Duke, and is also the author of books of fiction, criticism, and four other books of poetry, including the 2006 National Book Award winning Splay Anthem.  We talk to him today via Skype from North Carolina.