I can’t tell you how honored I am to have five (5!) of my Haibun de la Serna poems published in the brand new edition of Hambone 20. Nate Mackey is the editor and this magazine has been publishing innovative writers since 1974. In a 2000 edition of Callaloo, he laid out part of his approach: 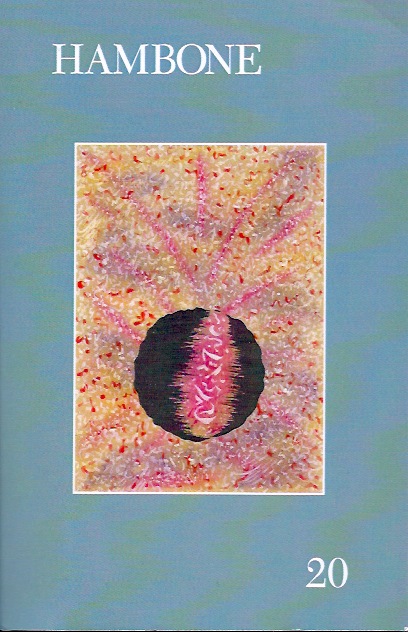 Whereas the 1974 issue was comprised entirely of works by African-American writers and artists, I decided that, beginning with issue number 2, Hambone would include work by contributors from a variety of racial and ethnic backgrounds, albeit continuing to present work by African-American writers and artists. It would, I decided, attempt to offer an informed, coherent eclecticism, publishing work by writers and artists from various communities inside and outside the United States, bringing together contributors who, actual and ostensible differences notwithstanding, share certain formal, linguistic and social concerns. It would lean toward and feature the experimental and the esoteric, divergent artistico-cultural practices, advancing a non-centrist, counter-mainstream aesthetic. “Cross-cultural work with an emphasis on the centrifugal” is how I characterized the journal’s focus for the Coordinating Council of Literary Magazines’ directory. The editorial agenda which has informed Hambone since resumption of publication in 1982 has thus been: a) to create an eclectic but not haphazard mix in which writers from a variety of communities both inside and outside the U.S. are brought together; b) to highlight shared as well as contrasting concerns and artistic orientations, favoring work bent on testing and extending the conceptual and technical possibilities afforded by writing; c) to compose each issue with an eye to continuity, counterpoint, overlap and overall coherence; d) to publish unknown and less-known writers deserving greater exposure alongside well-known writers…

After Nate performed for the SPLAB Visiting Poets Series in November 2011, I got an email thank you for my efforts in making that visit happen and a request to see some work for the upcoming edition of the magazine, the first since he moved to Duke, I believe. I sent him the haibun chapbook Amalio Madueño published and, to my delight, he chose 5 of the poems.