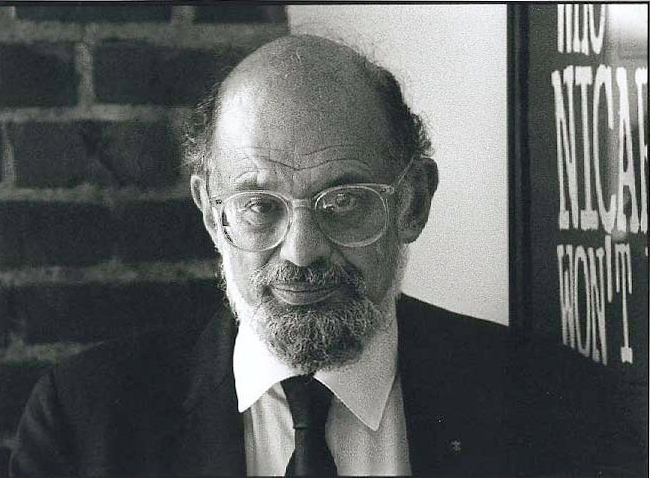 This site has been getting a lot of hits from people who heard about American Sentences via Kim Addonizio and her book Ordinary Genius which mentions the form and reference to the website www.AmericanSentences.com. Thanks Kim. I have not posted this handout on this site yet, so here goes. Let me know if you get anything good. (pdf here.)

In a 2001 interview with Anne Waldman and Andrew Schelling, Andrew said Allen’s idea for American Sentences: …was based on haiku. He was also very interested in Buddhism for the second half of his life, and probably the central mantra or wisdom phrase of Buddhism comes from the Heart Sutra. It runs, “Gate Gate Paragate, Para Sam Gate Bodhi Swaha.” And Allen discovered that has seventeen syllables also. And so he felt that maybe seventeen syllables had a more universal (Anne chimes in: healing properties) …a more universal application. It was not just located in Japan or old India, and so this is a way of him playing with that possibility.

So, the qualities of such a sentence? Like most other good poetry it should be Imagistic, with that gap of meaning between the writer and the reader; ie: phenomenology. Some kind of juxtaposition helps create a tension. For example:

These poems are all from 2007, and we can see several categories. There are cat poems on July 4, September 8, November 5 and on November 17, the poem was written from a cat’s perspective. Found poems are entirely transcribed, or set up in the poem, from January 19, February 9, April 5, July 26, August 27 and December 19. Some poems are from dreams (my daughter Rebecca Rose is often called RR to save a syllable) and some are from relationships. (That has been a rich source of sentences over the past 8 years.)

The key comes from a Ginsberg notion, poets are people who notice what they notice. This is a mindfulness exercise and, the more aware you can be, the better the poems. They do reflect the play of the intellect, so a dull mind will create especially dull poems, but at least they’ll be short! In seventeen syllables there is enough room for rhythm and word music. Dig that line, rotor wash of ceiling fans. Dactyllic meter if you’re scoring. You can find other examples above.

Avoiding some of the rules of grammar, such as the poem September 8, also add a nice effect and just enough busted syntax so not as to obscure meaning, but be another Ginsberg Mind Writing Slogan, Maximum information, minimum number of syllables. (Condensing.) Ginsberg also comes from the William Carlos Williams school of using demotic speech, so the found sentence of July 26 provides a good example of that, as does use of the word urp.

As with most good poetry, commentary is implied through imagery in the best of these poems. Surely the poem on November 27 is a political poem, but the subject is addressed with humor and subtext. Is the author calling for electro-shock therapy or electrodes on the genitals? We won’t know, but it is left to the imagination. Herein is that aforementioned  g  a  p. Jack Spicer said, Muses are patient with truth and commentary as long as it doesn’t get into the poem.

Exercise: Go out and take 10 minutes to slow down, look around and get two American Sentences. It is not as easy as writing seventeen syllables, but having a notebook on you at all times, making a commitment to writing one a day, or two a week, or whatever, will keep your hand in it at times when you are not writing much else. You can also go back and have a short, imagistic journal that may serve as source material for other poems. Remember: Imagistic, Juxtaposition, Found Poems, Mindfulness, rhythm, busted syntax, condensed, demotic speech. Refrain from commentary. It’s a bad habit. American Sentences, on the other hand… Look! He says he has American Sentences on the other hand!

(This exercise handout was adapted from my July, 2005 essay archived on the American Sentences website.)