Xi Chuan Notes on the Mosquito 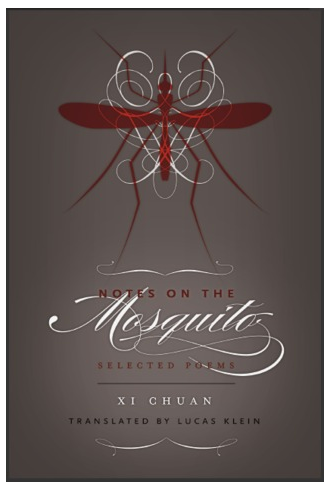 Notes on the Mosquito

After making a presentation in Xining, China in August, 2011, at the 3rd Qinghai Lake International Poetry Festival, a Chinese poet came up to me, told he he enjoyed my presentation and asked if I would like a copy of his new manuscript. I said, sure and was stunned when that manuscript was for a book to be published on New Directions, one of the most legendary poetry presses in the world. That poet was Xi Chuan (which translates to West Stream in English)and his book has now been published: Notes on the Mosquito. The translations have been done by Lucas Klein.

In Seattle September 2011, I had the chance to chat with Xi Chuan about his work. In the first segment presented here, he discussed how his father’s position as a soldier in the Red Army presented certain advantages to him in terms of education, his given name, Liu Jun, which means “army” and the practice of Chinese poets taking pen names for their writing lives. Part 1 (5:24)

In the second segment, he discussed how his studies of Romantic poetry and Ezra Pound influenced his work, how the opening in China in the 80s, presented a huge opening there for Chinese poets to learn about American poets like Robinson Jeffers, T.S. Eliot, Pound, Williams, Stevens, Lowell, Ginsberg, Sylvia Plath and others from an influential anthology during that time. Part 2 (7:54)

In segment three Xi Chuan discussed the advents of Modernism and Postmodernism in contemporary Chinese poetry, some of the events in Chinese culture which pre-dated the advent of literary modernism, but essentially were modernist movements, (the May 4th Movement in particular), also the influence of Russian literature after the 1949 Communist Revolution, the re-introduction of Folk Songs into contemporary consciousness (& revolutionary cliches) until the end of the Cultural Revolution and the opening of China to the West and Western influences. He talks about hearing Allen Ginsberg read in China and sing a song by William Blake. Part 3 (5:55)

In the fourth segment of our September 29, 2001 interview with Xi Chuan, he discussed his book Notes on the Mosquito, he talked about how he was simply trying to be a “good poet” like William Butler Yeats when he first started writing. This was in the 80s, the Chinese “Decade of Enlightenment” which lasted until about the time of the Tiananmen Square protests. He discussed the death of two close friends of his, Hai Zi (who committed suicide) and Luo Yihe (who died of a cerebral hemorrhage). He found his old way of writing (high-lyricism) “out of use.” He read a segment of the prose poem called The Beast. Part 4 (9:16)

In the fifth segment of the interview, the discussion of particular poems and lines from Notes on the Mosquito continued. He talked about a feeling of incapability and how that state was a certain level of accomplishment. (He was responding to a question about his line: “wrath makes incantations malfunction.”) He discussed the series of poems called Ill Fortune and the nature of bureaucracy and some of the effects of the introduction of capitalism into Chinese culture. Part 5 (11:25)

In the sixth and final segment of this interview, Xi Chuan talked about Chinese poetry after the era of the Misty Poets, including the Third Generation (after the Revolutionary Poets and the Misty Poets), as well as the divide between “intellectual” poets and “popular” poets. The popular poets feel that poetry needs to be understood by ordinary people. (Non-poets.) He also discussed Chinese feelings towards USAmericans and the notion that people around the world do not know the history of China. Part 6 (9:45).