This email came from Doug Nufer and Interrupture. (See below). Interrupture was part of the first Puget Sound Poetry, the kick-off event of the Cascadia Poetry Festival in March 2012. They have been together for many years, in one form or another, perhaps ten. Always inventive, smart-ass, improvised, impudent, irreverent and worth seeing, their upcoming show is the night before the next SPLAB Ginsberg Marathon and within three blocks of the venue where it will be held. Should be fun. 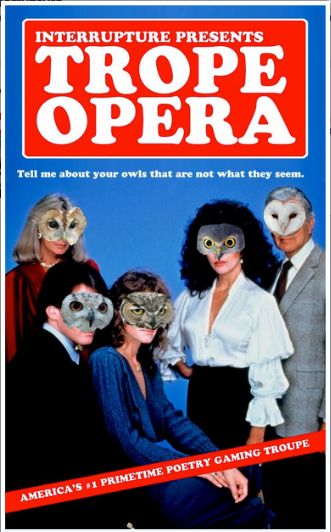 Trope Opera is a score made up of lines and tropes from soap operas, as rendered by Freudian and pop psychology.  We’ll be ranging throughout the long, shallow, storefront window space of the Hedreen in two 20-minute sets.

In your coma you need to know…

Interrupture presents Trope Opera: the days of our lives as the world turns, as rendered by interpretations of Freud, pop psychology, and the republic of dreams.

Oh Amnesia, what are the pleasures without which I cannot live?

Interrupture is a group of experimental writers based in Seattle. The group writes pieces designed for specific occasions and sites, revising lines according to various procedures and arranging each piece into a score which the group performs by following the rules of a game. The game typically begins with a challen…ge to choose a conductor, who directs the others by hand signals until the conductor is challenged and replaced by another. Chance operations propel multiple voices through a myriad of potential textual renderings. Since 2007, Interrupture has performed in many locations in and around Seattle, including 911, the Canoe Club, Subtext Reading Series, Breadline, Shard, Smoke Farm, the City Arts Festival, and the Frye Art Musem’s Moment Magnitude exhibition. Current members who perform in and/or write for Interrupture are Bryant Mason, Daniel Comiskey, Annalisa Pesek, Curtis Bonney, Cristin Miller, Jason Conger, C.E. Putnam, Kreg Hasegawa and Doug Nufer.