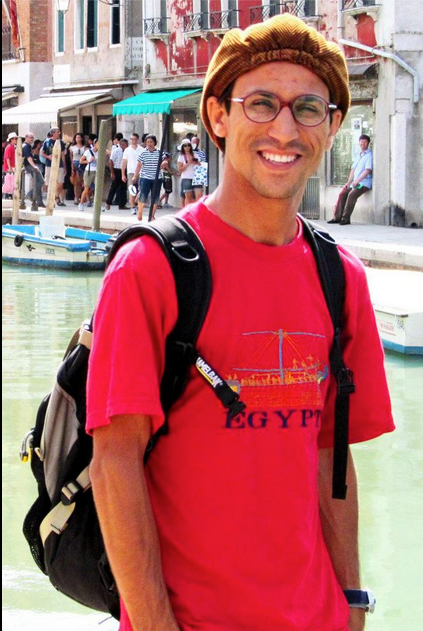 Looking back, it was October 2011 when I accepted a friend request from a man I had never met, or heard of, named El Habib Louai. He said he was a Moroccan poet and I tend to accept friend requests from poets. Right off the bat he also explained he was a Beat scholar and Jazz fan and so realized we had much in common. I told him my own literary interests were where the Beats left off and Black Mountain school of poetry began.

Soon after he told me he was planning a trip to the U.S. in summer 2013 and I told him if he came to Seattle, I would get him some readings and lodging if necessary. It turns out that one of the professors he had in Grad school, Ryan Burt, was now living in Seattle with his wife Jennifer Evans and they would be pleased to host him. 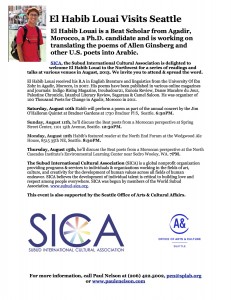 So I got to work, applying for grants, finding venues and arranging talks. The Subud International Cultural Association came through with a grant, as did the Seattle Office of Arts and Cultural Affairs and I created a poster for all of Habib’s Seattle area events.

Habib would arrive a few days earlier than planned, which worked out to our advantage, because I could get the tourist stuff out of the way and start showing him the town as well as turning him on to some uniquely USAmerican and Seattle experiences.

He had his first reuben sandwich in the Pike Place Market and visited the graves of Denise Levertov, Bruce Lee, Brandon Lee and Jimi Hendrix. We visited the Hillman City P-Patch. The term P-Patch is unique to Seattle and refers to a community garden where neighborhood residents can grow vegetables or flowers on their own little plot of land and share resources like shovels, wheelbarrows and rakes. We saw the Fremont Troll, the Fremont Lenin statue and Kerry Park. We visited Open Books, 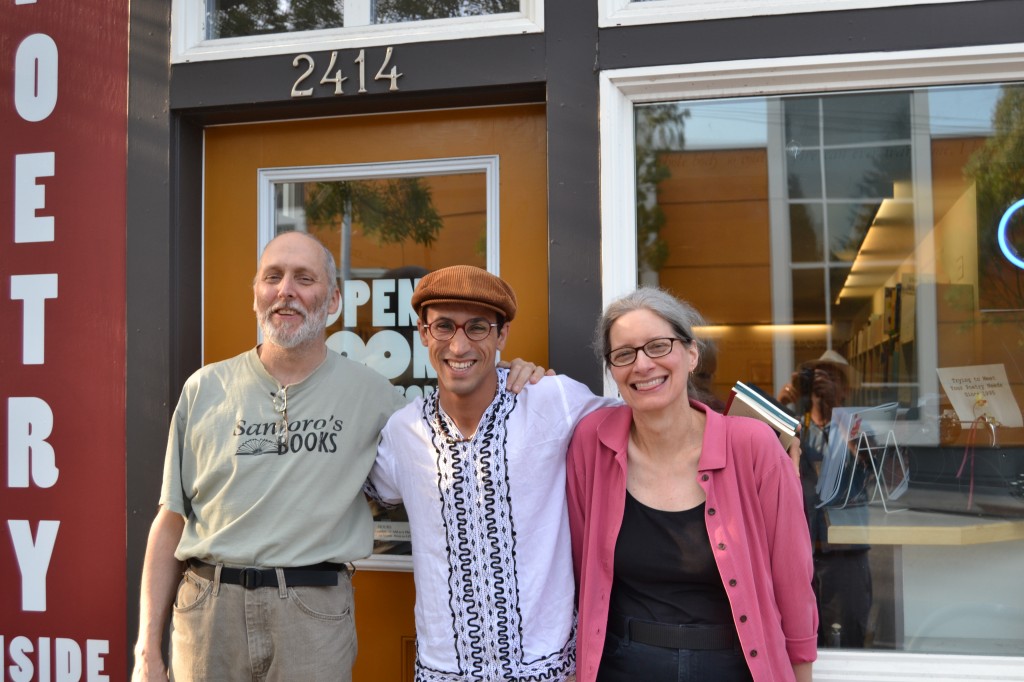 Habib with John Marshall and Christine Deavel of Open Books

Seattle’s all-poetry bookstore, as well as used bookstores in the Pike Place Market and Fremont. We loaded him up with books like the Naropa Disembodied Poetics anthology, Poets on the Peaks and the Collected Longer Poems of Kenneth Rexroth. I would give him copies of Nate Mackey’s Splay Anthem and School of Udhra, Michael McClure’s Three Poems and Lighting the Corners and other books. To see him drag around this hideous yellow suitcase full of books was quite telling as to Habib’s priorities. But they became clear as we hung out and had intelligent and intimate conversations immediately. He did not use alcohol or drugs and worked about 12 hours a week, so had lots of time and energy to read, write, translate (including some of Allen Ginsberg’s poems into Arabic) and connect with other poets and scholars on Facebook. He is developing quite the impressive network. His perception astounds me, as evident in his poem Kerouacian Epiphanies in the Portland Greyhound Bus Station. But also his heart, humility and generosity are noteworthy. 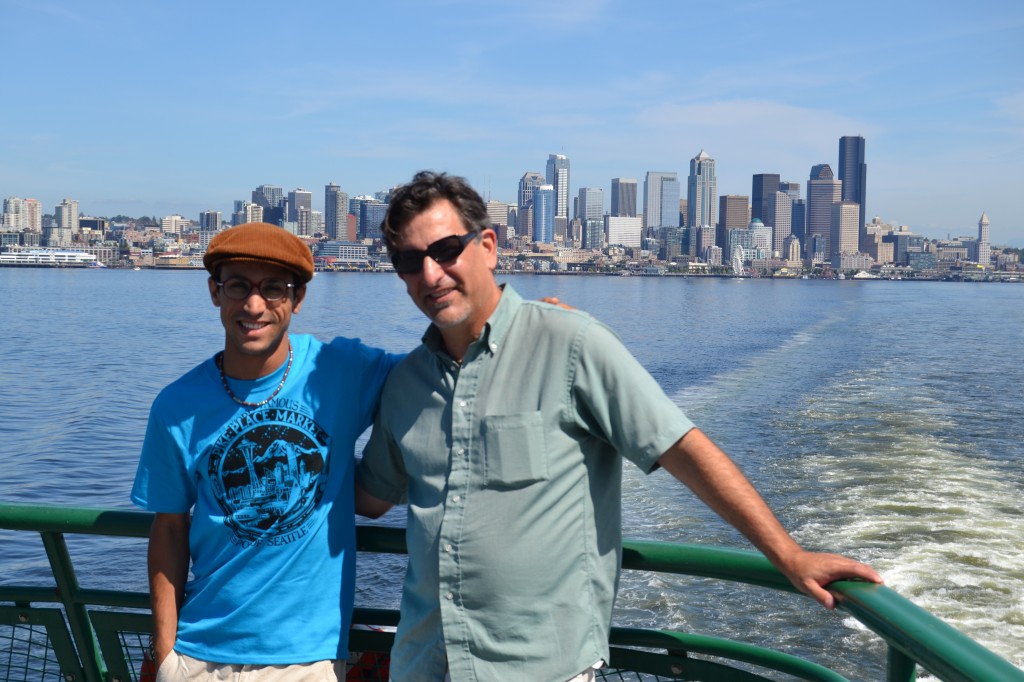 I was especially delighted to be able to take a ferry to Bainbridge Island, visit Eagle Harbor Books and find a park bench to read the first half of McClure’s poem Dolphin Skull. It is a poem that has had a huge influence on my life and writing. He was astounded at the consciousness behind such a poem and wished that someone had showed that to him ten years ago! It said a lot about Habib that he would get McClure so deeply and have the patience to listen to me read 33 pages of the poem in one sitting! He said it was a “life-changing experience” but he seemed to have a few when he visited here.

And then the gigs would begin. As I posted before here, this is what happened next. Habib (& I) would read with the Jim O’Halloran Quintet at Bradner Gardens, one of the jewels in Seattle’s p-patch network. Habib would begin to get his fill of Jazz with this remarkable band and get to have them accompany his original work and his translation of Ginsberg’s poem A Supermarket in California. 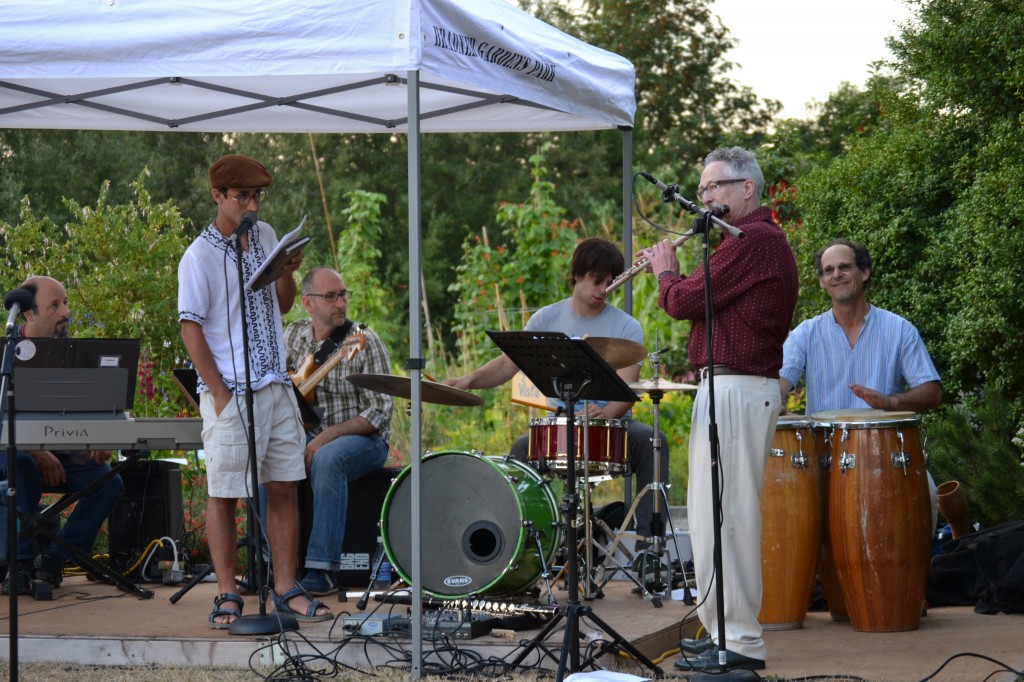 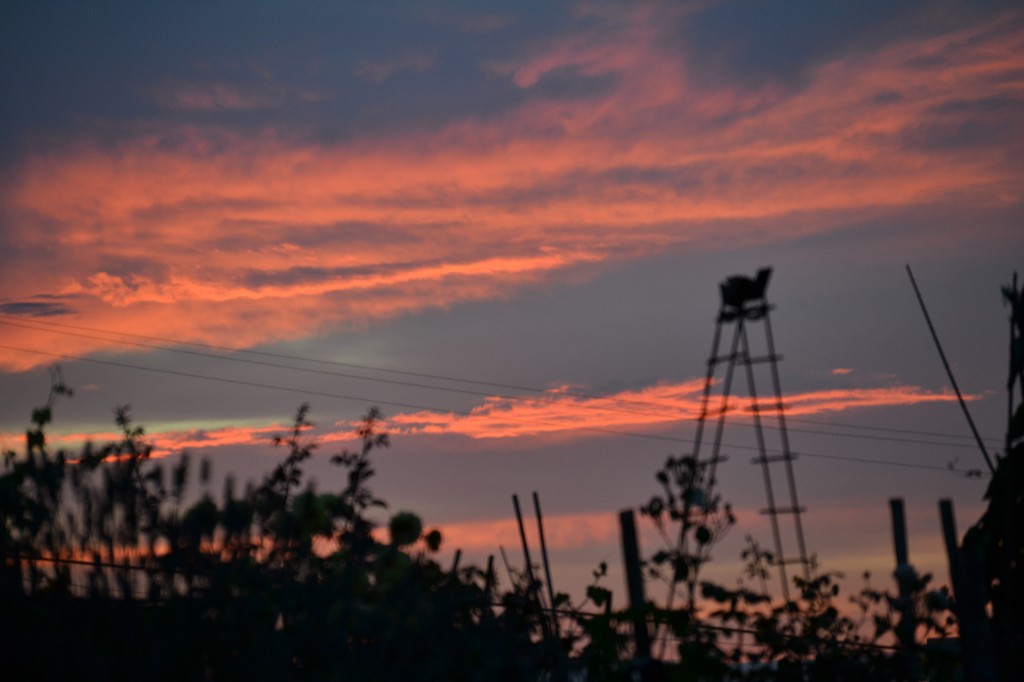 The next day’s gig was at the Subud House, also known as the Spring Street Center. Habib would talk to an interesting mix of older Subud members and younger poets from Seattle and as far as Virginia. (Habib’s networking pays dividends!) Habib would speak about his Ph.D. work on the Beats in Morocco and the counter-cultural movements that had much in common with the Beat ethos before the Beats arrived. The notion of who influenced whom was brought up by Habib and some older Subud members were stunned that their life experiences were now being referred to as history! 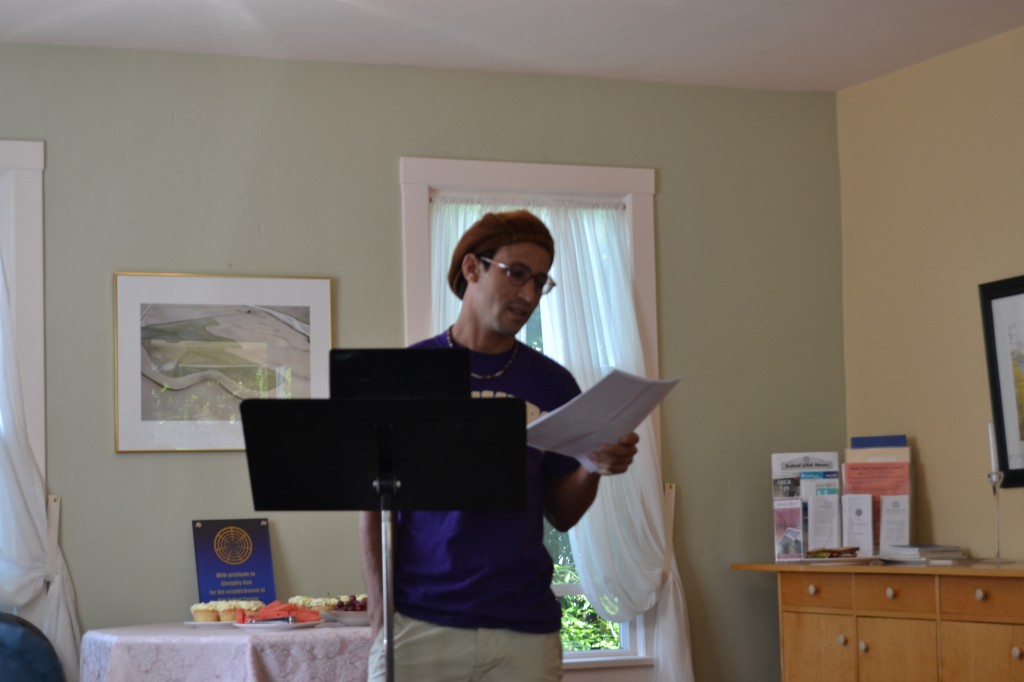 Habib at the Seattle Subud House 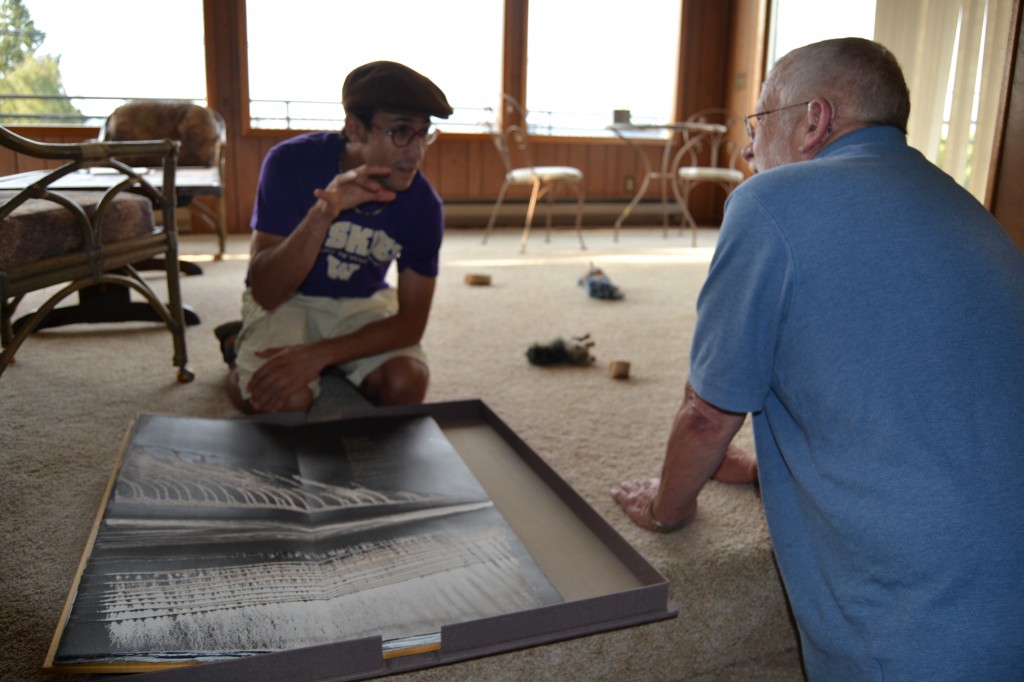 Habib and I visited Sam Hamill and his daughter Eron in Anacortes on August 11, 2013, & Sam gave Habib several books, and showed him the book Habitations, a remarkable work of book art by Ian Boyden. It is a huge series of original paintings with Sam’s poems laser-etched into the work. Hear part of Sam’s impromptu reading here. 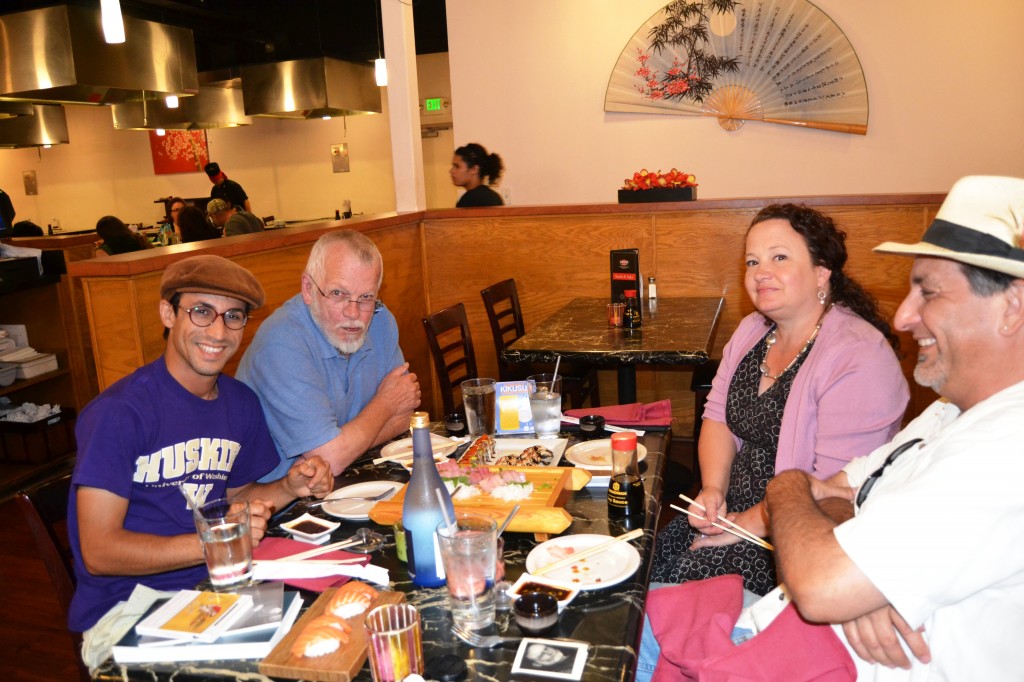 It was this evening that Habib got his first taste of sushi, as Sam loaded Habib up with books and we headed to Sakura in Burlington. To see Habib react to a hit of straight wasabi was priceless. Sam said: That’s why we water it down with soy sauce. Sam also told Habib about reading with Mahmoud Darwish about six months before the legendary poet’s death. Sam also told Habib he’d be delighted to visit Morocco some day after Habib suggested he might be able to arrange a visit. Habib passed on the Mu sake, which left more for us. Eron suggested I take advil for what she said looked like a neuroma on my left heel, which could have inhibited my climb up Desolation Peak. We drove home and made plans for the following night’s reading at the Wedgwood Ale House, which will be in my next report.

2 Responses to Habib in Seattle