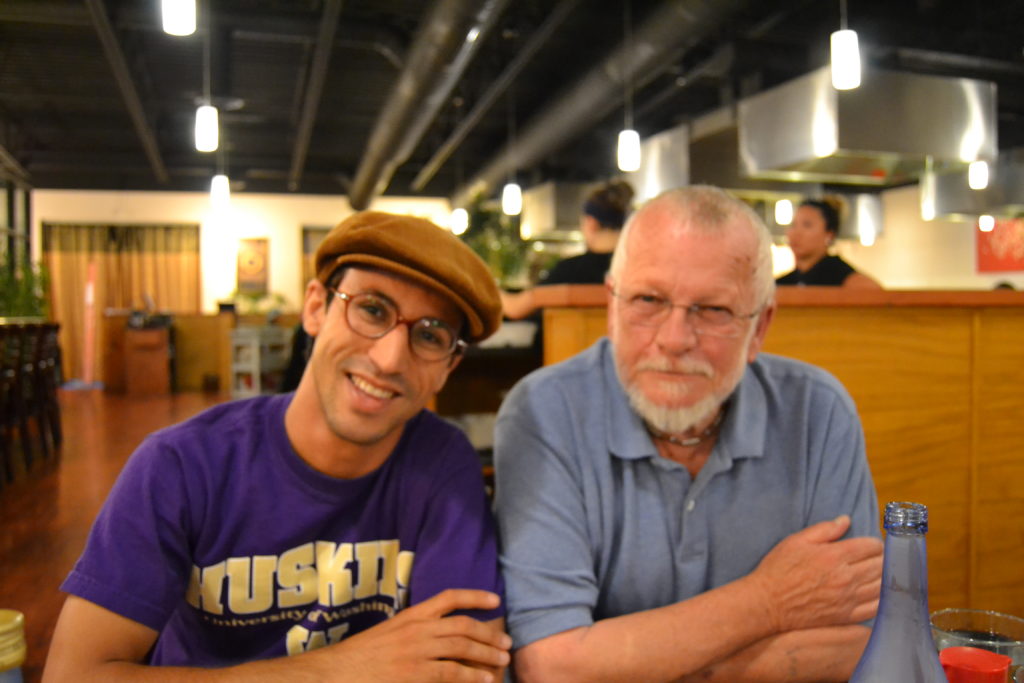 We left off with El Habib Louai’s first sushi experience with Sam Hamill and his daughter Eron and I at Sakura in Burlington. (See this post.) Monday (8.12.13) Habib got to go thrift shopping with my wife Meredith, a thrift store expert and fan of the song of the similar title and Habib got to hang out more with Ella, who LOVED him. 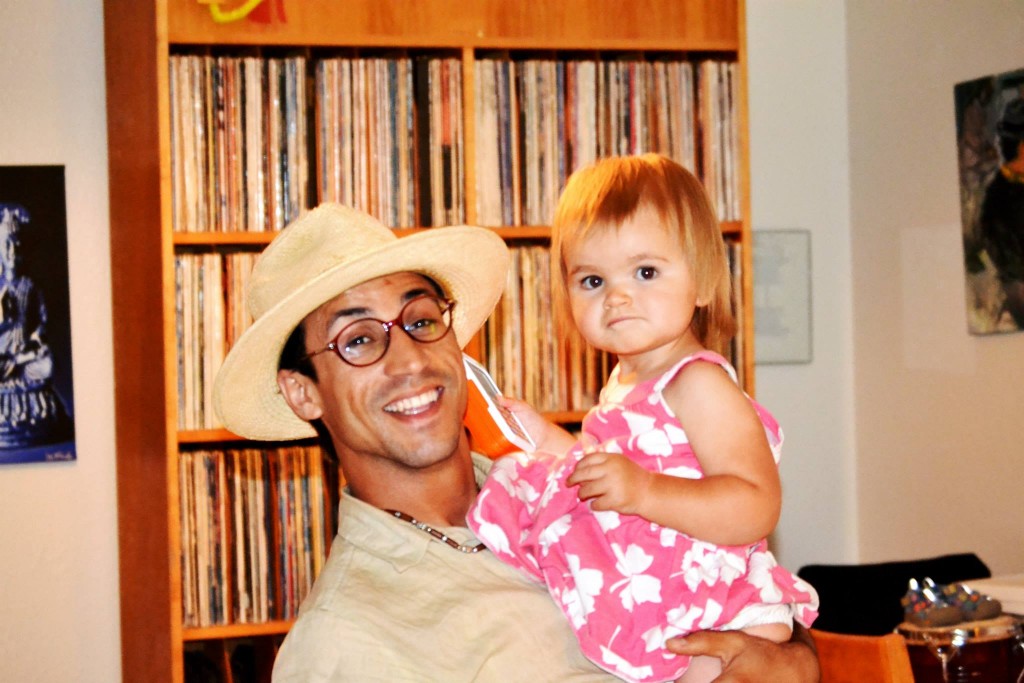 By evening we were in Wedgwood for Peter Munro‘s excellent North End Forum open mic, which happens on the 2nd Monday of every month at the Wedgwood Ale House, except maybe July when Peter is on the fishing boat in Alaska. Peter is an excellent open mic host and poet and the evening is well-attended. Many came out for the Beat scholar and poet from Morocco on Monday, August 12, 2013, and the open mic was excellent. We arrived early, so I got a prized spot in the first half of the reading and read some postcard poems from THIS August’s Poetry Postcard Fest. The guidelines for the fest suggest writing about the here and now and, by mid-month, postcards were revolving around my experiences with Habib and his uncanny perception of Portlandia, his appreciation of the Hillman City P-Patch (community garden) and other aspects of Habib in Seattle. Since I like to leave enough time for actual postcard recipients to actually get their postcards in the mail, I will not post them yet except for this one here:

(Click here for audio of postcard 453. For all the postcard poems I read at the Wedgwood Ale House that night, click here (4:53.)) 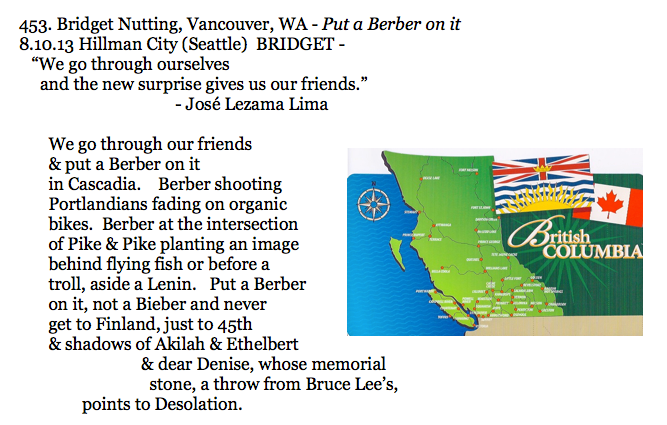 However, Habib was the star on this occasion and the audio of his reading is here: 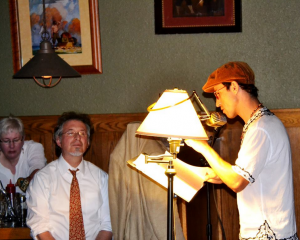 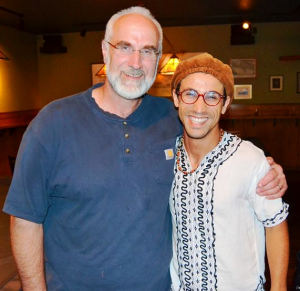 & Tuesday morning, after a meeting with Ellen Terry at Humanities Washington, Habib and I headed to North Cascades National Park. We got our backcountry permit and a water taxi from Ross Lake Resort to the dock at the Desolation Peak trailhead. We arrived late, at about 5pm and we could not stay at our first choice, Lightning Creek Falls campground, so got a permit to camp ON Desolation Peak, but we were not about to try that so late in the day, so camped on the dock. I would talk to Gerry Cook later about this decision and he said that our choice was a very low-impact way of camping. The stars were brilliant and I saw at least four shooting stars. You could see the nebulae as well, the skies were so clear on August 13. 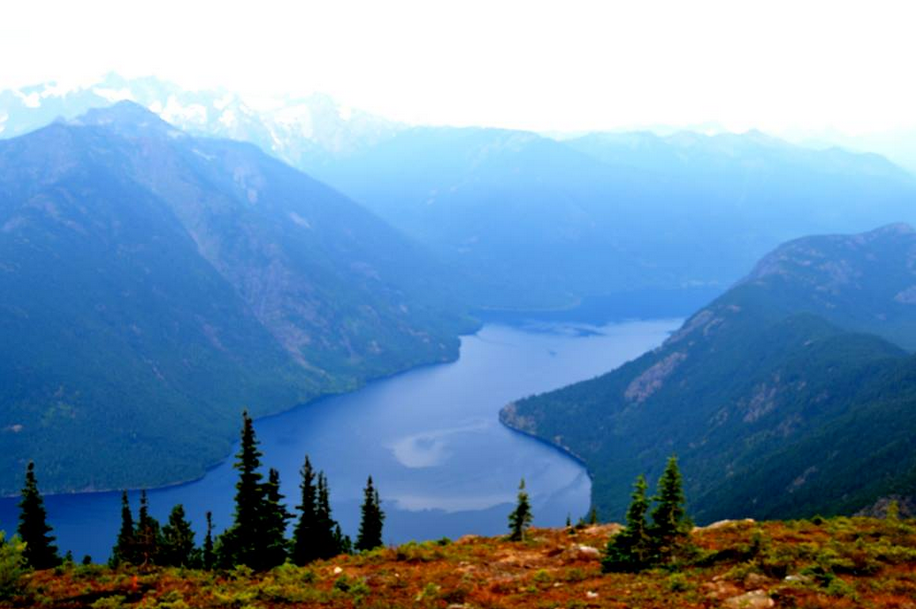 Now, keep in mind that when I found out Habib was a Beat scholar and coming to the Northwest, I felt a hike up to the top of Desolation Peak was the right thing to do. A literary pilgrimage. For more on Jack Kerouac’s 63 day stay atop the peak, see this link. 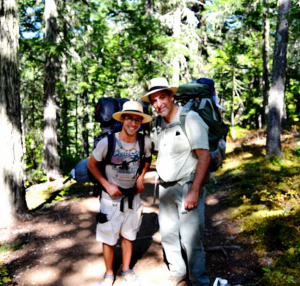 And so the morning of Wednesday, August 14, 2013, Habib and I awoke before 6A and were hiking with full packs up to “Jack’s Shack” as I like to call it. But after an hour, maybe less, I knew we were not going to make it with those heavy packs and so we dropped them, took smaller packs up the mountain and it would take me 6 hours, Habib about 5 1/2, to get to the top of Desolation Peak. It would be my 2nd time up there, having participated in the Beats on the Peaks trip in 2008. We took our sweet time, as I introduced Habib to mountain huckleberries and we ate almost every one we saw. By the time we hit the blueberries, at a surprisingly high altitude, we ate a few, but were motivated to get to the fire lookout and the remarkable view. It was just to the west of the fire lookout where Habib and I sat down and conducted our interview of his life, his work, his visit to the U.S. and his approach to poetry. 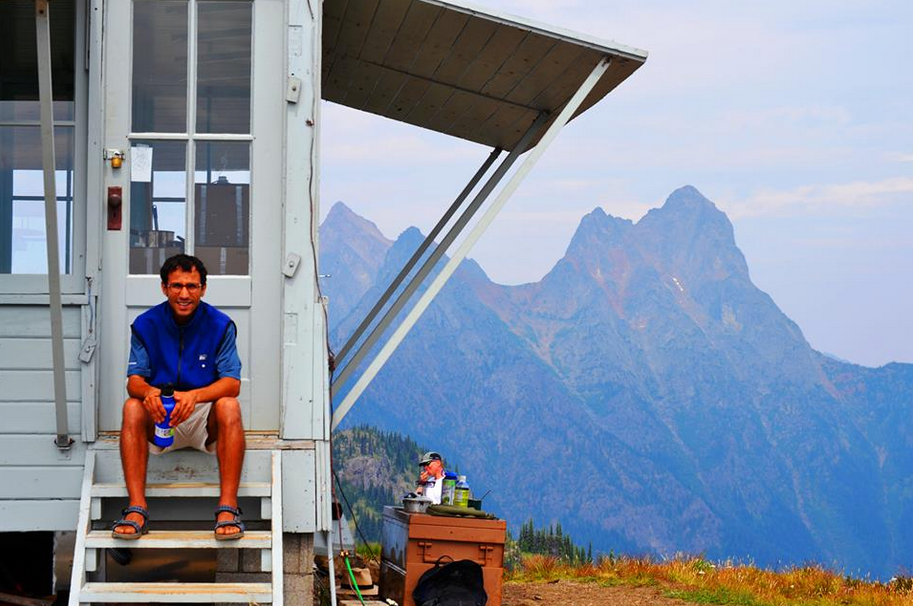 Habib at Jack’s Shack with Hozomeen 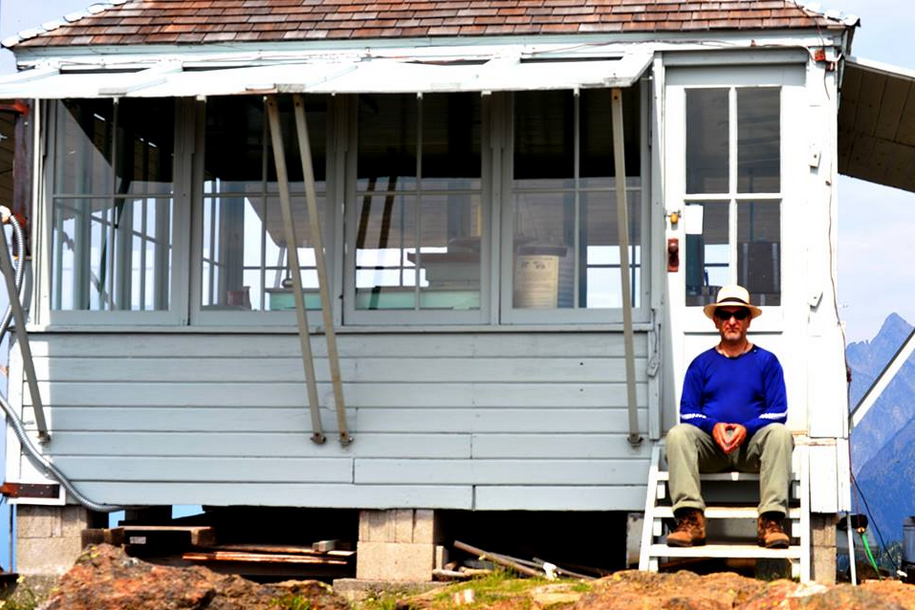 El Habib Louai Interview atop Desolation Peak, Part 1. In the first segment, Habib talked about his background, his parents (who are illiterate), how he found the Beats and how their counter-culture ethos greatly appealed to him and seemed to be a method for changing the culture of his country. He discussed the cultural encounter between the Beats and Moroccan poets in the 50s and 60s and hopes, through his Ph.D. dissertation to dispel the myth of Euro-centricity. Mohamed Choukri is one of the Moroccan novelists on which he will be focused. (14:13)

El Habib Louai Interview atop Desolation Peak, Part 2. In the second segment, Habib talked about his tour of the U.S., how it came to be mainly through Facebook networking, his visits to New York, Paterson and Newark, New Jersey, (retracing the steps of Allen Ginsberg and others), Altoona, PA, Boulder, Portland and Seattle. He recorded some of his Ginsberg translations at the Ginsberg Trust with Peter Hale, visited Amish country in Pennsylvania, rode the bus from Altoona to Boulder, Shambhala Mountain Center and sites in Seattle and the Northwest, including the graves of Denise Levertov, Jimi Hendrix, Bruce and Brandon Lee and a visit with the very live and always entertaining Sam Hamill, who introduced Habib to sushi. He also talked about his poem Kerouacian Epiphanies in Portland Greyhound Bus Station, how that was composed and how he tends to write organically, in a first take manner.  (17:25)

El Habib Louai Interview atop Desolation Peak, Part 3. Habib discussed his method of composition which he says owes something to the projective method, his deep experience listening to Michael McClure’s poem Dolphin Skull, how it must have been written at a deep level of consciousness and how moved he was to hear it. He discussed the upcoming stops on his tour, including San Luis Obispo, Santa Rosa, Berkeley and Los Angeles and visits with Michael Rothenberg, Michael McClure, Joanne Kyger and other friends and poets. He also discussed his plans for the future. (16:20)

Once down from the top of Desolation Peak, we camped on the mountain that night and the next day at Noon our water taxi whisked us to the trailhead that led to the short hike to the car and the short drive to the North Cascades Institute’s Environmental Learning Center. A beautiful center on Diablo Lake, we had a chance to shower, have some lunch and coffee before our talk that evening.

I talked about four different Beat-related soundbites. (See this post for details.) (21:35)

Habib talked about the Beat connection to Morocco and other aspects of his Ph.D. research.

The following morning Habib and I got into my car early and I made sure he was on the 9:35 Coastal Starlight to San Luis Obispo with the instruction to tell Michael McClure: The Amtrak is a person as much as people are.

I am grateful to everyone who made Habib’s visit to Cascadia a huge success, including those mentioned above, my wife Meredith who took great care of our little girl Ella and especially the Subud International Cultural Association and the Seattle Office of Arts and Cultural Affairs. Habib, your trip was mythic. May your mythic journey continue in the best way. I am honored to call you my Brother. 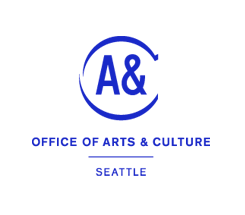