The term Ecopoetics has been in vogue since about the turn of the century. Beyond the well-known “nature poem” I take this term to be used with the insinuation of a little more responsibility on the part of the poet who writes such poetry. I’ve never used that for my own work, but would see how some would consider some of my poems, from A Time Before Slaughter and Pig War & Other Songs of Cascadia. That we live in a bioregion where the wilderness is especially vivid is part of they key as to why a strong environmental ethos exists here. The festival itself is part of a cultural investigation into the bioregion itself and bioregionalism can be seen as having sustainability at its core and thus resonant with ecopoetics.

At the first Cascadia Poetry Festival in March 2012, at the old SPLAB in Columbia City, Kim Goldberg organized a group of Canadian women poets for a panel and guided tour of Seward Park in Southeast Seattle, with trees over 300 years old.

At the upcoming 2nd Cascadia Poetry Festival (May 1-4, 2014) there are several events that at least touch on the theme of ecopoetics. Longtime bioregionalist David McCloskey offers a discussion based on his amazing maps of the bioregion in a talk called: “Cascadia Geography: Place & Spirit” on Saturday, May 3, 9a-10:10a.

Saturday, May 3, 11:40a-12:50p, the 2nd panel is called: Geoactivism (Geography & Activism). The panel includes the return of Kim Goldberg (Facilitator, Nanaimo), Eric De Place of the Sightline Institute of Seattle, Trevor Carolan of North Vancouver, a long-time environmental activist and practitioner of what he calls “Dharma Ecopoetics” and Kaia Sand, a poet and activist from Portland, OR.

The whole schedule is online at Cascadia Poetry Festival and there are other events which will get into ecopoetics from some angle. Gold Passes for the entire weekend are $25 on on sale now.

But rather than a plug for the festival, I was prompted by a report that named the White River in the state of Washington as the 8th  most endangered river by the American Rivers organization. (See this.) Apparently the old Buckley Dam has exposed rebar and an undersized and outdated fish trap. That the White River had been exploded several times over 100 years ago to divert its course was the source of several poems in A Time Before Slaughter and one in particular pasted in below. That the channel into which it would occasionally flow and, after the dams we built, the way it ALWAYS now flows is called the Stuck, is especially poetic, I think. Join us May 1-4, if you have any interest in the fascinating link between poetry and the biosphere. 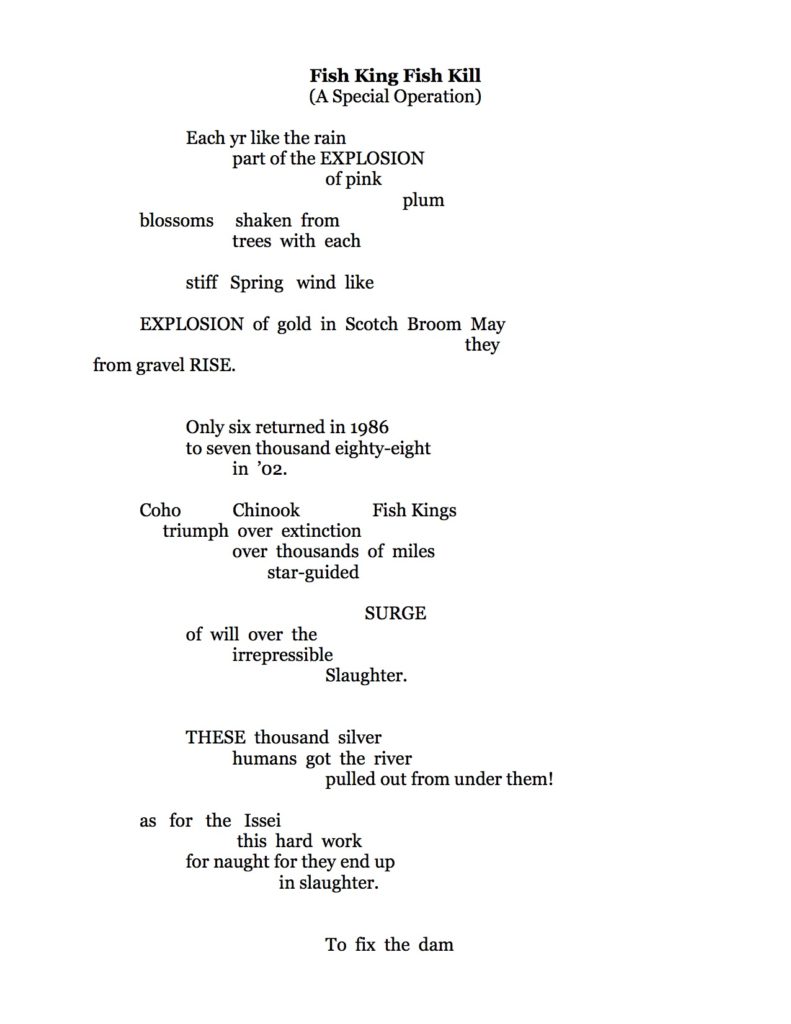 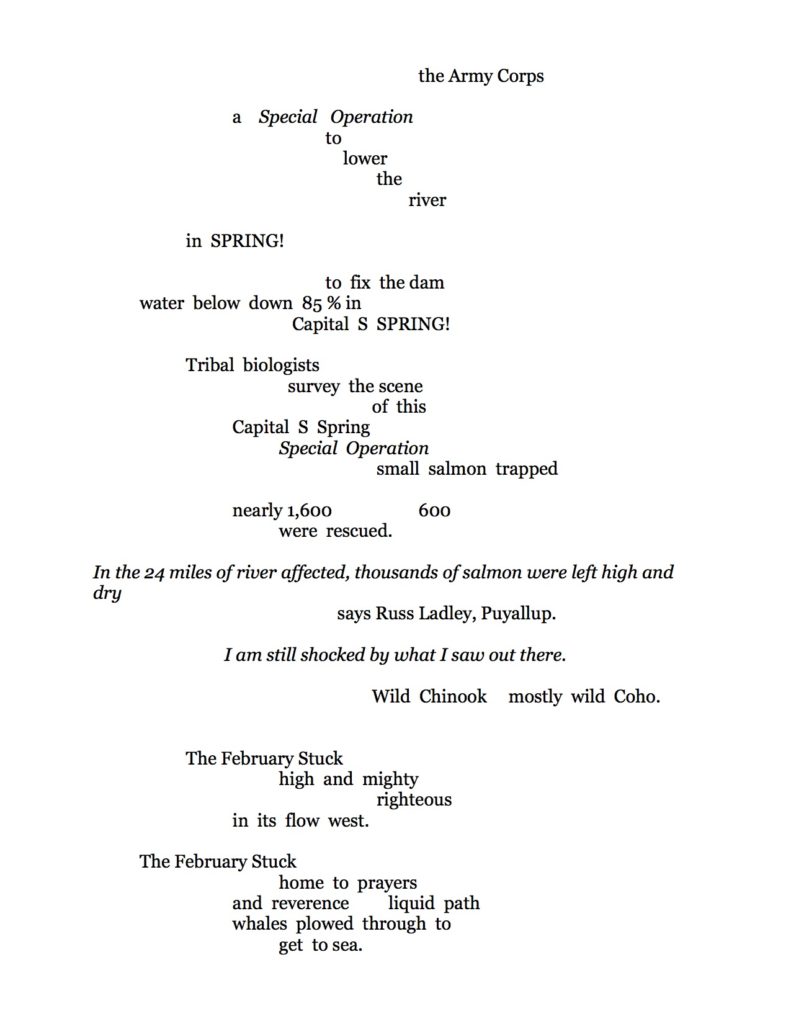 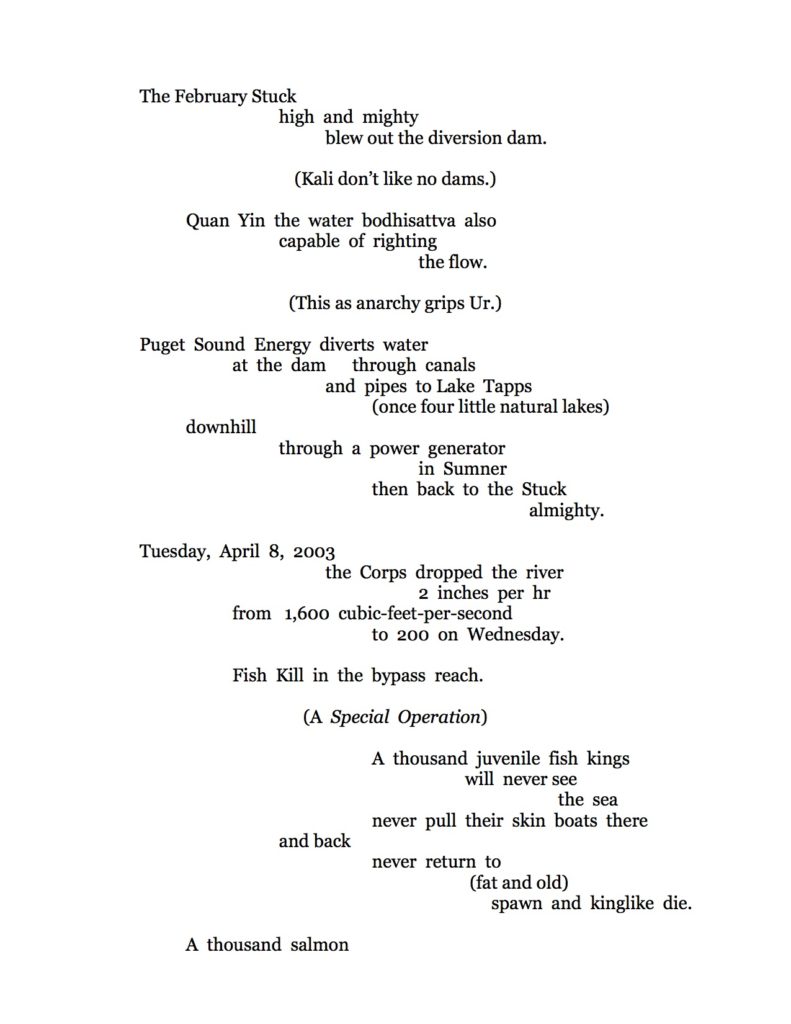 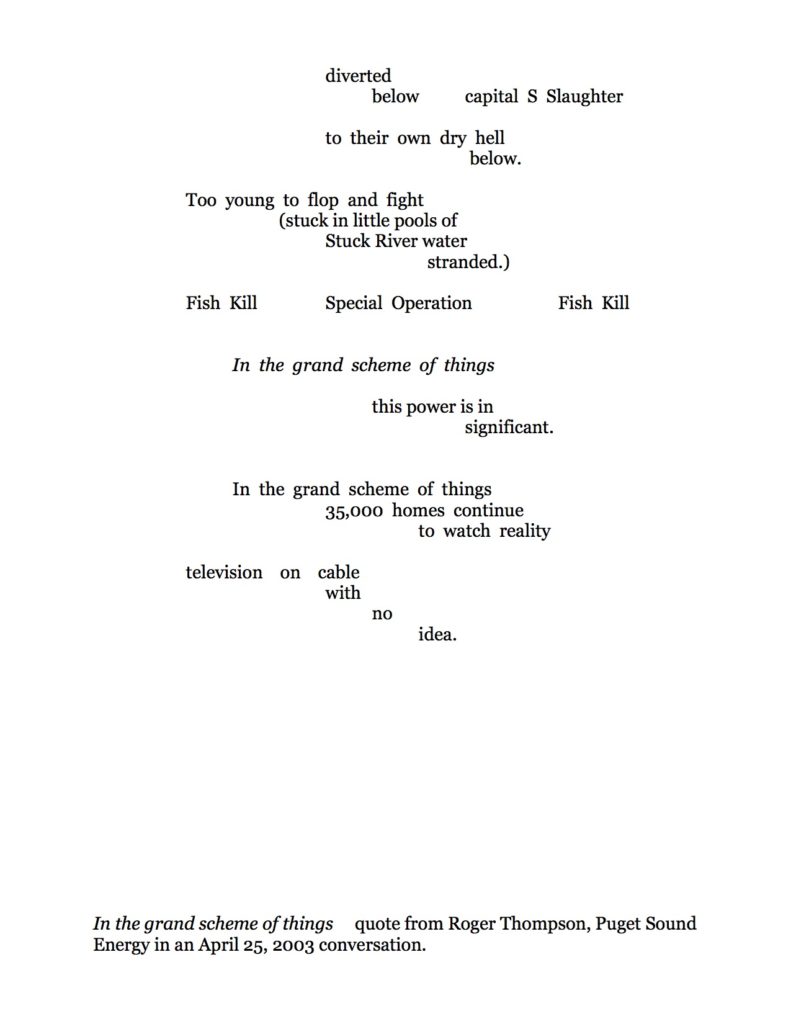