My Aunt Barbara Rose O’Connell died on Super Bowl Sunday, 2007, and there were ceremonies in Glendora, California, where she lived most of her life and outside of Chicago, where she was born and raised. My Dad could not bear looking at her corpse, as he was the last of four children of Dorothea and Glenn Nelson. My Dad died at 85 on Sunday, May 11, 2014, Mother’s Day. This photo was taken by my Cousin Dan O’Connell, son of Barbara Rose. 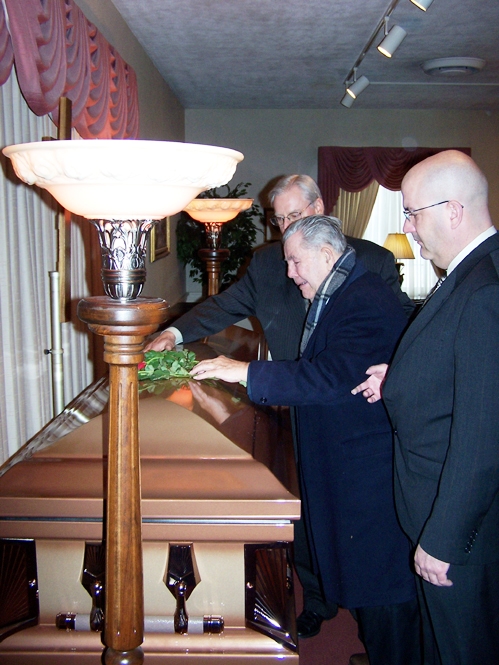 Paul Nelson Sr. at his sister Barbara Rose O’Connell’s coffin, Feb 13, 2007. Steve O’Connell and Andrew Glenn Nelson are with him.

around the brown
of the surroundings:
the lamps and the coffin
in which his sister lies
on which he throws a rose

its red stands out
its green stem and reflection
of his hand on the coffin
his eyes, face betray
the grief of two thirds

Nothing to live for
he’ll tell me like
I’m nothing
and my daughter
brother, sisters

other grandkids, nothing.
The picture says all,
gray is the hair we’re
left with if any and tears
will come if we’re left

holding the last rose
for Barbara Rose
or not noticing
all the things for which
we could go on.