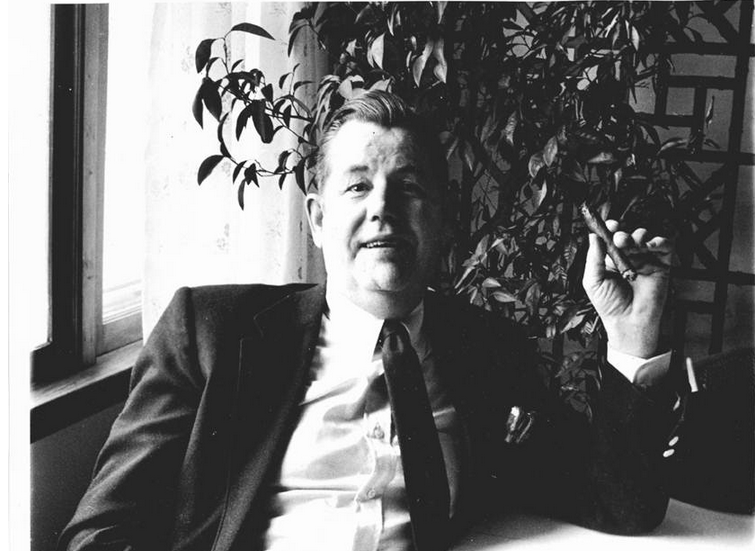 Since my Dad died on May 11, there have been a lot of thoughts of him that have gone through my head, as you can imagine. With the help of Subud and the latihan kedjiwaan I have been able to do targeted grief work (that no doubt is tied into his successful ascension to the next plane of his existence) that has helped the process tremendously. Still, I’ll think of something like talking to him about the White Sox (who have at least three Cubanos on their team this year including the leading candidate for Rookie of the Year, Jose Abreu) or even when, while in the car, we smell a stink from outside and I say “put on your shoes!” (One of his lines) and remember he’s gone and have an outburst of grief. In times like this I think about him.

And poetry has been solace for me, either Dave Casario quoting Ezra Pound:

And Barry McKinnon referred me to his eulogy for his father Ben entitled “It Can’t Be Said” with lines like:

…not that death is exit from time: it is time,  — not a vale, but a folding in space without wind / air…

I have been fortunate to recognize early how much I can learn from older poets (other father and mother figures) and have found a way to be in their presence, from interviewing Allen Ginsberg and Michael McClure in 1994 and 95 (& MANY others) to having the ear of Sam Hamill on the golf course, or Brenda Hillman and Joanne Kyger by email, or phone calls with Jose Kozer. I could tell stories about how they could sum things up with one line. The poet who lives a life of poetry, whose each poem is, as William Carlos Williams suggested, a summing up of the poet’s life to that point. Those poets for whom an engagement with poetry, the life of poetry, is about deepening one’s consciousness.

But it is solace to know that I loved my Dad well. It was not easy, as he took out his rage on me from an early age with lines like “skinny as a rail!” and with beatings. The rage he felt from losing his older brothers within five weeks of each other from diphtheria and the lack of grief work that was the standard of the time, 1939. I forgave him and learned to have tremendous compassion for him and his situation. I read a poem for his older brothers at their grave at his suggestion and will never forget that moment. So if this is my “true heritage” I am going to follow up his advice from beyond the veil.

It is my practice to journal every day, to note the things that got under my skin the previous day, or little successes in life. I do my prayers, draw a rune and, if lucky, do yoga, then I am ready for the day. I will also look at my journal entry from the previous year, to see how I reacted to something little and insignificant, or to see if I have made progress on any number of personal issues, weight, diet regimen, drinking, &c, always with the notion that I am here to become a more conscious person. And I have kept open two files which are two 2013 journal entries. One from Friday, June 14, 2013, involves a conversation with Dad in which I wrote:

Pop was freaking me out a little when I called him. I was talking to him about knowing I had some special angle on the world and was applying it to poetry. He said he knew that, that he agreed. I asked him if it were the Brown or Grover side that gave Bomma (his Mother Dorothea) her stubborn streak, because it was the stubborn streak in me that was hanging on and not relenting about this tack towards the poem and he said “both sides.” He said that Jenny Louise Brown (his Grandma) died younger than Alva Grover (his Grandfather) and that when he (Pop) was born, Jenny Louise said “He’s half grown.” As I was pulling into Healeo, he was telling me that should he not make it to next week (should he not live) I should know that he believes there is a special talent or gift that I have and must share with the world. Wow.

And from my Tuesday, June 11, 2013 journal entry, there was a note about my cosmology. How I view the world regards to how consciousness manifests. What we’re here for. The Subud model of life forces which has the notion of Noble Human as the mode we should strive to achieve in this lifetime is a useful one for me. But a little over a year ago I noted my model and kept it private, for fears that it would be misinterpreted as “blame the victim” or any number of incorrect takes on what I mean. Here it is:

Here’s how my model works:

Illness = the universe trying to tell you something about your thought patterns that are not in sync with the flow of life, love and acceptance. The more threatening the physical challenge, the more dire the disease (the more urgent the communication) and it’s likely not the first message the body would send.

Genetics are transmitted via thought patterns, or they manifest in that way, and we are called to be aware of these patterns and mitigate the ones that are toxic and work to support the aspects of genetics that are genius. The words may share similar roots. Genius may be genetics that are operating with complete creativity, meaning, in sync with the healthy flow of energy and imagination.

This model has been liberating for me, one one hand, because I can take responsibility for everything that happens to me, knowing I attracted it to myself in some regard. Meredith will tell you I struggle with this all the time. The model has also been very difficult for me because I am very hard on myself and often find myself in situations where I’ll be criticized for whatever I do. I draw these situations to myself to learn and be more humble and compassionate. It is hard for me to have compassion when I encounter people who have no inner lives, no integrity or who, especially, take advantage of my generosity. I hate that the most and it’s a sure way for me to “get my Chicago on” which is never far from the surface.

So there it is Pop, the main hunk of my model for living and how consciousness manifests. Part of my gift to the world. Not exactly an original thesis, but unique in the way in which I carry it out, through poetry, activism and in the way I relate to my two daughters, the two humans who continue to make Father’s Day relevant in my life now that you’ve made that transition into pure time. Ashé.