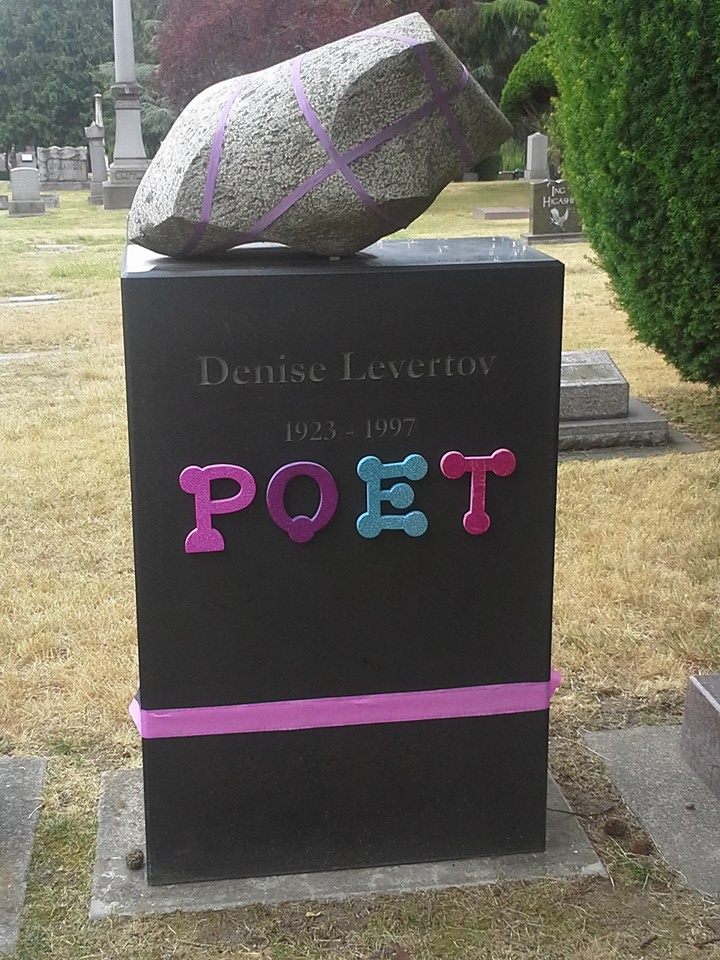 Amalio Madueño, the great Taos poet whom I met while attending the legendary Taos Poetry Circus for three years in the late 90s, came to Seattle Labor Day weekend to attend Sam Hamill’s book release party at Elliott Bay Books. Habitation is Sam’s new “Fat Selected” as he likes to call it and Amalio arranged for us to play golf and then interview Sam the morning of his reading. Amalio has also arranged for the transcript to be published in the next edition of the Malpais Review and I was just going over the text.

One subject that has fascinated me since I read her letters to and from Robert Duncan has been Denise Levertov, the legendary poet who spent her last years in Seattle and is buried here. She lived a short walk from where I write this and all my poetry postcards from 2014 have an epigraph from Levertov. Here now the segment from the September 2, 2014 Sam Hamill interview, forthcoming from the Malpais review. (And be sure to read the section that has me trying to pin Sam down on an entity larger than the self when that comes out. Fun poetry cat & mouse.)

Nelson: One of those people who understood the life of a poet was a person you became close to and moved here in the last part of her life. Denise Levertov. Can you tell us how you became acquainted with her work & became friends with her?

Hamill: I first met Denise at an anti-Vietnam poetry reading in Santa Barbara in 1968. I was still in school in LA. But I had gone up to hear the anti-war poets. And were standing outside the Unitarian Church in SB & next thing you know Denise was standing next to me & I was eavesdropping on what Denise was saying as people were asking her questions. I had already been wowed by her poetry. I read virtually everybody New Directions published when I was young. New Directions to me was, it was “The Temple” in a lot of ways, except for the weird novels. And we chatted a bit. Then a few years later I was at the University of California & took over their literary magazine Spectrum. Which had been a really good magazine in the 1950’s I guess, when Hugh Kenner was its editor. William Carlos Williams’ essay on the variable foot was first published in Spectrum. So I wrote to Denise to ask for a poem. At the time she didn’t have a poem so she didn’t get into the issue I edited. But we began to exchange an occasional letter. I have never been a good correspondent. I was too busy with other things, publishing, standing in front of a printing press for 10 hrs a day, etc. But we became friends & she would occasionally call me up and she was a great blabber on the phone when she was in the right frame of mind. Every three or four months I’d get a call from Denise, she would turn me on to 3-4 books and 3-4 ideas and our friendship grew out of all of that.