Ferguson, Race, Privilege and Life in a Police State 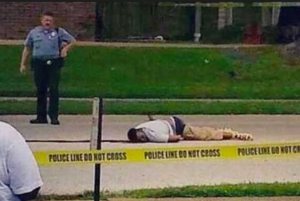 Was inspired by seeing Jarret Middleton’s thoughts about the lack of charges brought against Darren Wilson, the officer in Ferguson, Missouri, who fatally shot Michael Brown, a young black man whose crime was shoplifting. His thoughts came out to nearly 1,400 words and are published them here. Here are some notes on what he wrote and offer my own thoughts.

As the oldest son of a Cuban immigrant mother and working-class father, I’ve been able to pass, for the most part, as a “white guy” though never related to that and have experienced racial profiling and discrimination in job interviews, in the workplace, in the Auburn community (no surprise there) and even crossing the border back from Canada. I have been told on more than one occasion traveling abroad that: “You don’t seem like an American” which I regard as a compliment. They don’t call them Ugly Canadians for a reason.

And Jarret Middleton and I have had this discussion, something deeper than knee-jerk LEFT vs RIGHT arguments, which is a beautiful aspect of dialog with Jarret. It informs his publishing work and his own writing, which I hope he’ll reveal to us soon. That is his work beyond his first novel.

In his “Thoughts on Ferguson” he starts with a quote by W.E.B. DuBois: “A system can never fail those it was never built to protect.” That he is quoting the Harvard-educated author/sociologist/historian shows you a bit of Middleton’s range. He sees the looting and vandalism in Ferguson (& in other places in the U.S. when racial unrest is at the core of the destruction) and he not only understands it, but says of the destruction:

If you don’t understand why, then you are shockingly disengaged from the amount of pain and suffering that plays out as a manner of normalcy in this country. Our communities are already destroyed, they are systematically impoverished by capitalism, an unequal distribution of wealth, jobs, services, investment, and opportunity that is so grossly unjust that it has to be defended by a predatory race-and-class based system of courts and prisons whose illegitimate stranglehold on power requires it to be enforced by a violent, militarized police force.

Sound radical? Yes, regardless of how you define that word. I define it as addressing root causes and it is evident Middleton understands quite clearly what’s happening here. In the very next paragraph he says: 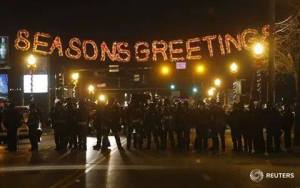 This is a reaction to the typical “left wing” Facebook (or other social media platform) response by those who generally are privy to his posts or mine and how easy it is to park your white ass behind a computer and type out your two cents, then go on to the sports website and finish your coffee. Robert Reich, the former Clinton Labor Secretary, whose views I admire a great deal is not one of the folks I would call out for not being involved beyond the Facebook comments, but his response is, although more articulate than the regular fare, consistent with what Middleton is saying about the response by the Left. Reich says:

(1) When there’s conflicting evidence about whether an unarmed person has been murdered by a police officer, a public jury trial is the appropriate process for determining guilt or innocence, not a grand jury in which there’s no opportunity to cross examine the accused.

(2) The role of the media isn’t to guess whether someone is guilty or innocent, or to give the accused free airtime to explain his side of the story (as did ABC this morning). It is to report the news.

(4) Armed law enforcement personnel should be equipped with body cameras of the sort now used in many communities to assure responsible behavior.

(5) There is no excuse for looting, burning, or other forms of violence. Innocent people are harmed or killed. Communities may not recover for years. Trust is further destroyed.

We know Middleton disagrees with #5, and he agrees with #1, but what about #2? As a professional broadcaster for 26 years, some of that as a radio News Director, I can tell you stories about how the bottom line IS the bottom line, but let’s look at what Middleton says about media:

Part of the scourge of modern thought, mostly liberal, but embodied in hysterical conservatism in a more vulgar form, too, is suffering from the belief that you live in a world that exists for your pleasure and your approval. I keep reading how we need to “have a more honest dialogue about race and violence in this country,” something I support and am interested in having, of course. But where exactly do people expect this dialogue to carry out? In a corporate media that has served as a mouthpiece for corporations, corrupt politicians, and the defense department? Or on social media, which is almost more nefarious, because we are actually complicit in helping the very forces that controls us? We give so much private information over to the NSA that we are essentially assisting the security state in learning everything about us, so they can further pattern our behavior, predict what we are going to do, how we are going to react, and extend the scope of power to encompass any move toward sovereignty or even undermining the ability to have an original thought or perform an original action.

While I could go on with pointing out the moments of keen perception in Middleton’s post, I’ll stop quoting with this thought of his:

Originality of action is what is really feared here.

And while I am not a violent person and have quoted many times that great Sam Rayburn line: “It takes a carpenter to build a barn, but any jackass can knock it down,” I’ll not criticize the looting and destruction of property, but I won’t participate in it either. What I will do is to suggest the originality of though and action of my own life, not working for a trans-national corporation since my radio days (last full-time radio job ended in 1992) starting a non-profit org that is literary and community-building in nature and engaging in Cascadia bioregional activities that seek to make me and others more aware of the unique culture here, reinforce the sense of place here, try to understand the real things at stake with the ongoing clash between casino capitalism and the biosphere – the very system that supports life and is under attack by oil companies and other transnational corporations and their minions and work to create something that can withstand the end of empire and the capitalist system itself. 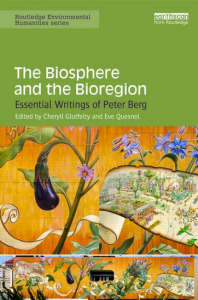 Peter Berg The Biosphere and the Bioregion

It is not surprising that the day I read Middleton’s missive, I also read Peter Berg’s brilliant short essay on the notion of Lagalou. In the book The Biosphere and the Bioregion: Essential Writings of Peter Berg, lagalou is something he saw in action during his eco-restoration work in Equador and is described as a “nonmonetary society that is able to manage without the industrial-style infrastructures of the North, structures that, while efficient, are impersonal and create isolation.” Though Berg died in 2011, he felt that the coming of peak-oil might accelerate the possibilities of our ability to “re-learn” how to live outside the capitalist system which is in dire need of a 2.0.

But my role will not be to tear down by busting up a starbucks, though Middleton’s thoughts have reminded me of my own status and privilege. Instead I’ll help foster systems that do render the present system obsolete, Airbnb among them. Think the Diggers or Fred Hampton and Black Panthers feeding the poor. This is his conclusion that, in the words of Gilles Deleuze, we should “bring something incomprehensible to the world.” That will keep them guessing as the system blows apart from the inside as the video below concludes.

R.I.P. Mike Brown and every innocent victim of hatred violence in this world, Tim Brenton among them.