It was a long day, but one filled with vision and inspiration last Saturday (Dec 6, 2014) as I was part of a Board Retreat for CascadiaNow! I agreed to be Board President when asked by founder Brandon Letsinger and it is exciting to be part of a social movement to foster the identity of the bioregion in the minds of residents, as well as anyone around the world who understand the benefits of bioregionalism and the huge shift it suggests.

I have been aware of the concept of bioregionalism since the early 90s when I interviewed Peter Berg, who created the Planet Drum Foundation in San Francisco in 1973, not long after he attended the United Nations Conference on the Human Environment in Stockholm in 1972. His experience there helped him understand that the environmental movement, as we have come to know it, was only interested in limiting the damage done to the environment, but not drastically changing the way in which people of “developed” nations lived. Bioregionalism, in his view, was a way of reinhabiting the places where we lived in a way that we’d now call sustainable. He saw environmentalism as a bandaid. 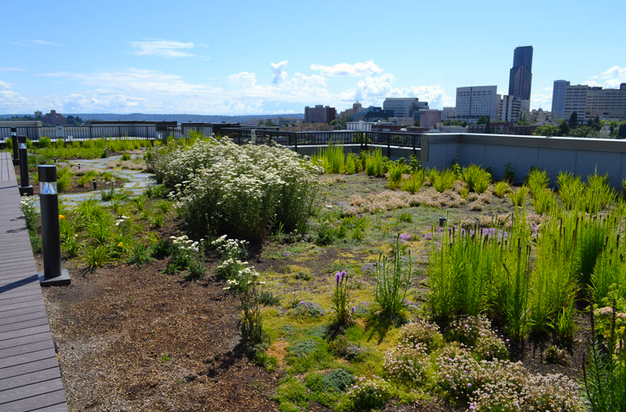 view from the roof of the Chloe Apartment Building, looking toward downtown Seattle

And the setting for Saturday’s retreat was quite Cascadian, as we managed to have access to the meeting space at the top of the Chloe apartment building at 14th & Union in Seattle. A brand new building with environmental amenities like a rooftop garden and view of the rapidly-changing Pike/Pine section of Capitol Hill, our bi-national board could get to work in a first-class setting on envisioning how this new non-profit corporation would begin to make the bioregion and bioregional concepts foremost in the minds of all residents.

Agreement among all port cities to reduce fossil fuel consumption,

Tribal communities engaged and working with us,

The notion with that last goal was not that we’d prevent chains from moving here, however that might be accomplished, but we would work to show how such firms are against the interests of people in the bioregion. In a word, most corporate chains are “Uncascadian.” It was a term I’d never heard before, but immediately recognized it as something that I could identify with. What works in other parts of the continent, but does not work here. I’d blogged about climate refugees relocating here from other bioregions and the notion that more are coming makes more urgent the cultural education effort by people here who do not want Cascadia turned into some strip-mall shit-hole like much of the U.S. already is. There might be chains like Walmart here in the future, but we envision people will be educated enough not to shop there. Sure, you can get coffee at Starbucks and they STARTED here, but they do things like sue Vermont over their effort to label foods with genetically-modified organisms, so Caffé Vita or Stumptown are more Cascadian.

While these are generalizations and are not limited to this part of the world, you could probably think of more and are welcome to add Uncascadian things in the comment section. I do not expect to be the arbiter of what is and is not Uncascadian, but am grateful the discussion got started at the CascadiaNow! Board Retreat. What to you is Uncascadian?