My hiking partner and I had made it to the end of the Hoh River Trail, 17.5 miles, and had done a silence ritual, where each of us spent the day away from the other in the Olympic National Park. I’d gone to Blue Glacier, where I had the most incredible experience of looking down into the deep blue of a glacier, an experience I never had before and not quite exactly since.

And in our tent late at night we’d hear a new wind get going off the glacier and within a minute hear the sound of pine needles lightly falling on the top of our tent. It happened several times and it was a stunning experience, the kind that stays with you forever. I was able to get back to Glacier Meadows once since then and a rare Fall-like storm in August actually produced some snow there, so we headed out without having a chance to explore much in that visit. That last trip was 2008.

Fast forward to December 2014 and the U.S. Navy wants to use this pristine wilderness to conduct “Electromagnetic Radiation Warfare Training.” An article in Truthout says:

Enough electromagnetic radiation will be emitted so as to be capable of melting human eye tissue, and causing breast cancer, childhood leukemia and damage to human fetuses, let alone impacting wildlife in the area.

And this in the week that U.S. citizens became aware of the practice of “rectal feeding” which was not considered torture, but a necessary defense against terrorism. It makes one wonder who the terrorists really are.

Yet earlier this year I was reflecting on my time in the Olympic National Park about 15 years previously when promoted by certain poems in the old Japanese anthology. These old poems served as prompts for my own imaginative flights into language, indigenous practices and memory. Here are four more poems in the series After The Japanese. 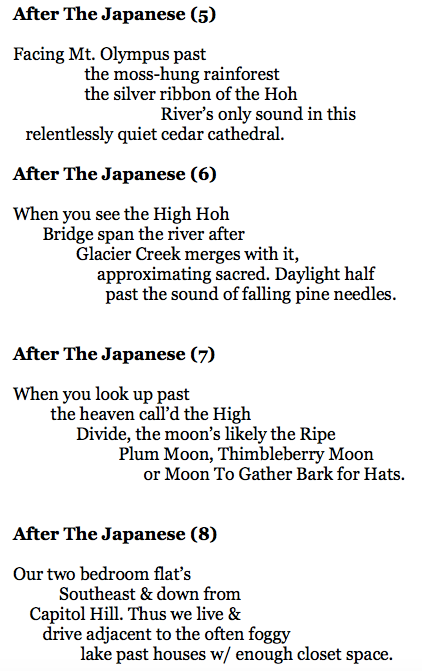