I had just dropped off my daughter Ella Roque at her Spanish immersion pre-school and parked in front of my favorite juice bar when the top of the hour radio headlines broadcast that President Obama would be announcing a shift in U.S.-Cuba relations. I called my Mother, born in Holguin in 1937, to make sure she was listening and NPR broadcast his whole announcement during which he quoted Jose Martí, referred to the 53 year economic blockade against Cuba a failure and used the words “self-determination” to inaugurate the latest chapter in a relationship between neighbors who, for more than have a century, have been in a virtual war.

That the U.S. has trade relations with China, who would seem to pose a more considerable threat to the U.S. and its interests, was mentioned by President Obama. We give them Most Favored Nation trade status and if they were to cash in their U.S. bonds, there would be a great deal of economic turmoil in this country. We’ve essentially put our massive military spending on a credit card issued by China, which is ironic when you think about it. The President also mentioned Vietnam, with whom we fought one of the bloodiest wars in U.S. history for what exactly, Country Joe and the Fish are still wondering.

And I could hear sniffling and tears pushing through the long-distance cell phone connection as she could hear from my end. Sanctions that prevented us from sending leukemia medicine to her dying Mother in the 70s were ending (and all the other heartbreaking limitations we’ve suffered from) for what? The way I see it was that the sanctions were to assuage the huge egos of petty politicians who would never be able to control Cuba, or its government, but could only cause suffering. They, and their impotent methods, have finally lost.

I am grateful for the release of all the prisoners who were exchanged, U.S. and Cubans alike, and this will be a special holiday season for them and their families. Of course President Bill Clinton made the economic blockade of Cuba an act of Congress, so it will take some actual initiative from Republicans come the next Congress in January to admit the failure of this approach to dealing with our feisty neighbors 90 miles to the south and end the policy. Given that there are those “R’s” who represent agricultural and business interests, who have been arguing for a new approach, and maybe pure financial interests will prevail, as they usually do in this country where dollars (& the “free market”) are divinity.

But today, for me and my Mother, separated by 2,000 miles, but connected by a shared experience, a kind of “Kennedy’s Dead” moment when we’ll both remember where we were when we heard the long-overdue news that relations between the U.S. and Cuba were shifting, a U.S. Embassy would open in Havana and travel and commerce restrictions would be eased. More in the excellent Washington Post article here. You can also see a fact sheet regarding the new policies here.

I was fortunate to have been able to visit Cuba a few years ago and there is one poem that covers some of my experience there, some of my personal mythology and some of my own awakening as a result of that visit, the effects of which are still reverberating in my life. It riffs off work by the great Cuban-American poet José Kozer, to whom I am grateful for recognizing the Cuban in me the first time we met. Thank you too, President Obama, for this action. We knew you had it in you. Now let the Republicans take credit for ending the embargo and closing Guantánamo and we’ll really be on to something. Viva Cuba! The poem, Guanabo Beach, 2005, is to be published in 2017 by Red Hen Press. Details: 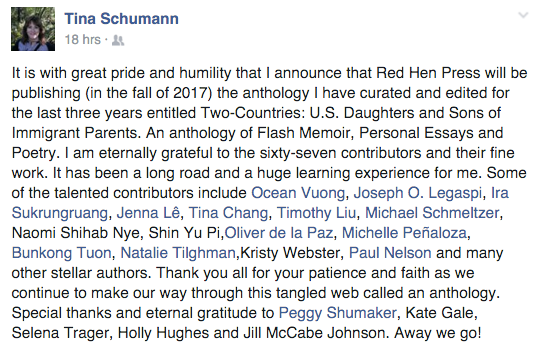 My daughter’s reports for the National Journal here: https://www.nationaljournal.com/politics/how-normalizing-relations-with-cuba-could-reshape-florida-politics-20141217