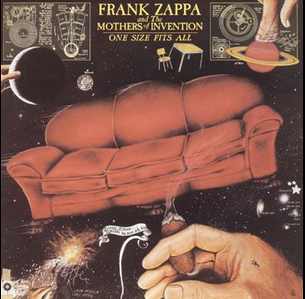 One SIze Fits All

Music has always been a huge part of my life. From a kid who heard my Dad playing records on the hi-fi (Xavier Cugat, Stan Kenton &c) to listening to the Top 40 radio station in Chicago, (WLS) in the late 60s and early 70s then progressive rock outlets Triad and WXRT in the mid to late 70s, becoming a DJ (& later an interviewer) in a 26 year radio career that began in 1980, certain songs have served as the soundtrack to my life. Music has provided solace in times of great sorrow. I remember U2’s Sunday Bloody Sunday helping ease the pain of the breakup of an early love and Joni Mitchell’s Blue a later one. And this last week when putting away the Christmas CDs, which go at the end of the CD rack, I saw One Size Fits All the 1975 Frank Zappa CD, an album referred to by Allmusic.com critic François Couture to be “considered as one of the easiest points of entry into Zappa’s discography” and described on the site as being: Amiable/Good-Natured, Rousing, Complex, Elaborate, Humorous, Ironic, Irreverent, Provocative and Quirky. What kind of 15 year old would gravitate toward music like this? Get some sense of that and you’ll get some sense of who I am.

I’ll never forget the time in Olympia when a friend had some visitors from Italy and I had the CD in my car for some reason. To hear us all sing the lines from the tune “Inca Roads”: “Hey, nana Hey nana Hey nana Hey, HOY! HOY! HOY!” must have been some experience for those present who were not familiar with Zappa. So much joy in singing those non-words, kind of like a crude sound poetry.

And anytime I hear “Can’t Afford No Shoes”, I turn it up. I love seeing my daughter Ella start to dance to either of these two songs. And the lyrics seem prophetic in this era of the most extreme split between rich and poor than at any other time in history.

Mer was listening this morning too but relating to the Pojama People before hearing the lyrics:

But like any good art makes you think about your own life, any real art holding the potential to allow you think about what’s going on with you, what’s unresolved in your psyche. Zappa being a complicated, irreverent, uncompromising, intelligent, driven, celebrated, attacked and talented man and artist (MY adjectives this time) had/has a huge range of experiences he can evoke in people who really listen to his work. The song Sofa No. 1 came up next. The sorrow was palpable and I would listen to it once or twice. I was reminded of the time I used that tune as background music on my public affairs program as I dedicated my show to the memory of FZ when I found out he had died at the age of 52 from Prostate Cancer. That fact says a lot about his own personal mythology.

But what really got me today was following a hunch while re-reading Zappa’s Wikipedia entry. It referred to a song Watermelon in Easter Hay as one of FZ’s “signature” guitar pieces. I’d heard one of the others, “Black Napkins” from the LP Zoot Allures, live, in fact, at the Uptown Theater in Chicago, but the pathos and beautiful tone of FZ’s guitar melding with Paul Carman’s baritone sax was just stunning. It’s a remarkable showcase for Zappa’s guitar genius, loaded with emotion. Maybe the kind of emotion that could only be delivered by an artist who, at the top of his game, may have had some inkling, conscious or not, that he had about 5 years to live. I listen to that sustained note at about the 4:30 mark of the tune, and when the song ends, hit the round “play it again” arrow, and again imprint the tune into my consciousness with all the emotion I am feeling at this time in my life. Thanks Frank. Funny how immortality manifests, eh? 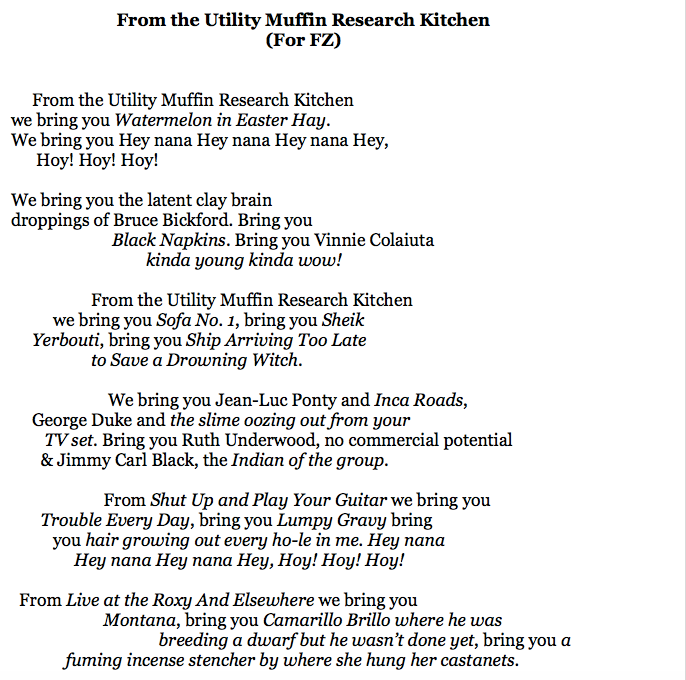 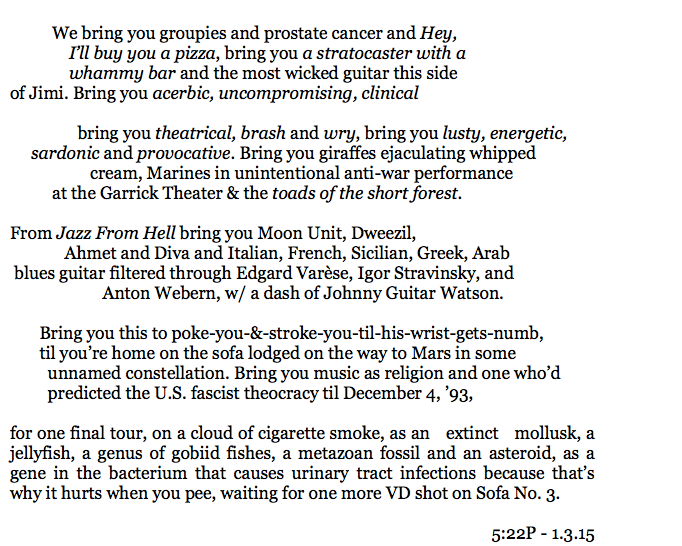 2 Responses to FZ (From the Utility Muffin Research Kitchen)