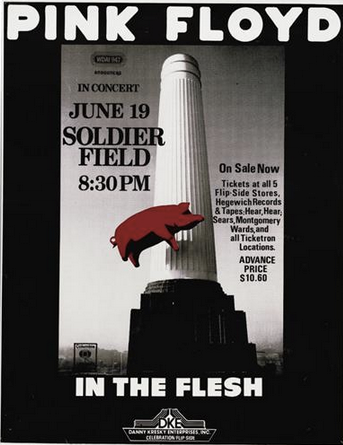 Pink Floyd, Soldier Field, June 19, 1977, Chicago, IL. One estimate suggests the crowd was 95,000 people. This is likely the largest concert attendance at a show I’ve ever attended, although there was a concert that summer also at Soldier Field with Ted Nugent, Journey, Lynyrd Skynyrd, R.E.O. Speedwagon and 38 Special that was pretty packed as well.

But for Floyd it was the Animals tour, a record we greeted with much anticipation and ultimately disappointment. It was not close in terms of quality to their two previous records, Dark Side of the Moon and Wish You Were Here, which are no doubt their best, but they performed all of Wish You Were Here which was augmented by a huge round screen that played animation that was synchronized to the music. A silhouette of a man was floating as if in space and, timed to the tune, had his head cut off by a sword! Holy Shit!

And it being the summer before I was to start my senior year at Lane Tech High School, I was ready to party. I bought a ticket for my date, Patty Palencia, but then she found her own way to the stadium, which was disappointing. I hung out with guys from the neighborhood, one of whom, the son of a cop, Mark Drygalski, attempted to blow up the band’s inflatable pig with an M-80, but he did not have the balls to hold on to it long enough, so it is likely that he injured someone. And I learned that making your moves on a girl when you are high on acid and there are 94,998 other people around is not a recipe for romantic success.