Gigs Ahoy! I’ll be participating in several readings over the next few weeks. I’ll have manuscript versions of Pig War & Other Songs of Cascadia and other merch. Saturday, March 7th, 2-6P at the Cornish Blackbox Theater, 201 W. Mercer at Seattle Center, I’ll be with the other members of the Four Hoarse Men, a sound poetry group, involved in Post Disciplinary Texts, an incubation collaboration with sound, movement and other artists.

Curated by Julia Greenway and Jessica Hoffman, the Cornish Playhouse Arts Incubator residency is designed to encourage artistic risk-taking by supporting artists in the creation of work that is outside the boundaries of their usual genre, discipline or comfort zone.

The theater is one block west of the corner of Mercer and 2nd Av W and downstairs and to the right. Hard to find, but this won’t be dull.

Sunday, March 8th, from 5-8P it is the first Rainier Valley Lit Crawl. Two neighborhoods. Four venues. Fourteen writers. One night. Come to this free reading of epic proportions in a busy corner of Southeast Seattle. Event is free. Event is all ages. Each venue will have food and drink available for purchase. 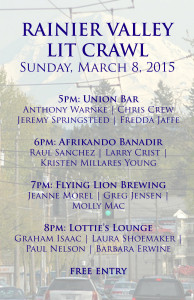 Friday, March 13th, at King’s Books, at 7PM, the Distinguished Writer’s Series at 218 St. Helens, in Tacoma, I’ll be the featured reader at the reading series Connie Walle has been running since the late 1960s! There is open mic after the break and I hope to see you.