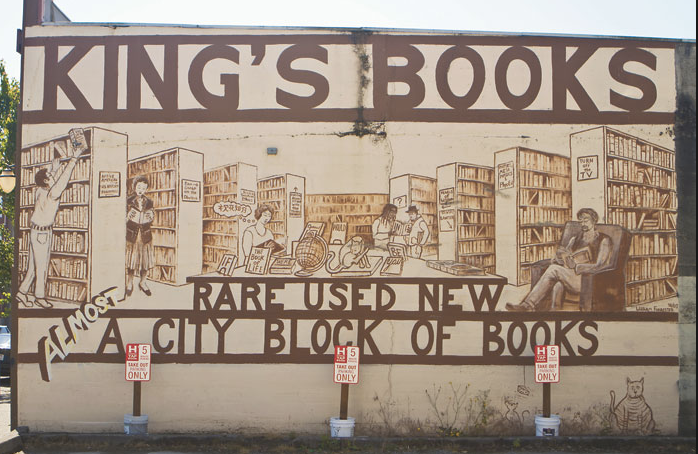 I am grateful to Connie Walle for inviting me to be a featured reader at the Distinguished Writer’s Series in Tacoma. I did it last Friday, March 13, 2015 and was delighted to see many long-time friends in the house.

I had been scheduled for February 2007, but had to cancel due to the death of my Aunt Barbara in California and thought I’d never get the invite again, but never was only eight years. Connie has been running this reading for 25 years. While other readings have come and go, she carries on.

And King’s Books is a wonderful (huge!) store and the neighborhood it’s in is also wonderful. Something about how Tacoma does not tear down its old buildings like Seattle does is really beautiful. Were there an easy way to get from Tacoma to Seattle, I think you’d see quite a boom in Tacoma, but I also suspect the residents there like things the way they are. You’ve heard of “Old Seattle?” There is no such “Old Tacoma” as it tends to be a lot like it was 30 years ago. 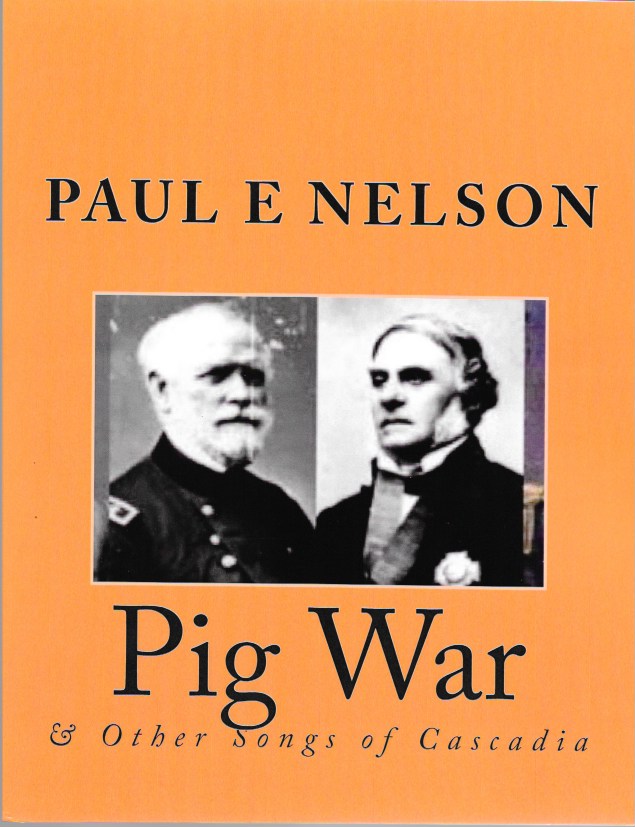 And this was my first featured reading sporting new galley copies of Pig War & Other Songs of Cascadia. I saved poems from that collection for the end and had time for only three of them, although one is kind of an epic and I rarely get the kind of time to stretch out as I did here at the Tacoma reading. Having such a long time to read (30 minutes) gives me time to show a little range, which I think is a critical skill for poets. This series reminds me a lot of the reading series hosted by the Olympia Poetry Network, where they get good attendance, people also listen well, featured readers are given a stipend and attendees buy your books.

So check out a couple of the poems below and feel free to comment, or let me know if you’d like a galley copy ($20) of this ongoing project which is part history lesson, part bioregional cultural investigation, part journey into realms only accessed through the practice of outside, as Robin Blaser’d say. Enjoy! & thanks for your interest.

Paul Nelson is founder of SPLAB (Seattle Poetics LAB) in Seattle, the Cascadia Poetry Festival and the August POetry POstcard Fest (PoPo). www.POPO.cards. He has published a collection of essays, Organic Poetry & a serial poem re-enacting the history of Auburn, WA, A Time Before Slaughter (shortlisted for a 2010 Genius Award by The Stranger) and American Sentences, a book of 17 syllable poems drawn from the first fourteen of his 20 years of daily practice. The tenth anniversary edition of that book includes Pig War: & Other Songs of Cascadia. He’s interviewed Allen Ginsberg, Michael McClure, Wanda Coleman, Anne Waldman, Sam Hamill, Robin Blaser, Nate Mackey, Eileen Myles, George Bowering, Diane di Prima, Brenda Hillman, George Stanley, Joanne Kyger & many Cascadia poets (see: https://paulenelson.com/americanprophets/) has presented his poetry and poetics in London, Brussels, Bothell, Cumberland, BC, Qinghai and Beijing, China, Lake Forest, Illinois, Ukiah, CA, and other places & writes an American Sentence every day. www.PaulENelson.com
View all posts by Splabman →
This entry was posted in Uncategorized and tagged Connie Walle, Death of an Indian - Birth of a Shaker, Elegy For Frank Natsuhara, Frida One & Too, Frog Song (After Susan Point), King's Books, Olympia Poetry Network, Pig War & Other Songs of Cascadia, Tacoma Distinguished Writers Series, The Practice of Outside. Bookmark the permalink.