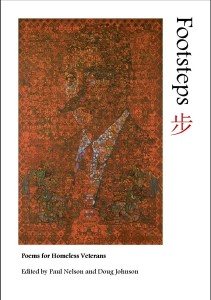 Doug Johnson of Cave Moon Press has invited me to edit a book that will benefit homeless veterans. The call is below and a pdf attached so you can spread the news far and wide. This is a worthwhile project which will have some big name poets involved and Alfredo Arreguin’s wonderful cover art. (pdf of call here).

Subject Line: Footsteps for Homeless Veterans Call for Submissions 洞月亮 CMP Footsteps 步 To celebrate ten years of helping communities Cave Moon Press will produce a book to aid homeless veterans in 2016. This is a book of witness to the invisible.

Alfredo Arreguin has already been kind enough to donate the cover art. Cave Moon Press is blessed to be a part of such a rich artistic community. Soldiers march for liberty. Carbon footprints stomp watersheds. People wander without hope. As a poet holds their duty to the page, soldiers hold their duty to serve. Others hold their duty to the environment. We all know of someone setting out on their quest without ever getting the homecoming of Odysseus. When duties disillusion people wander.

To that end, Cave Moon Press is requesting original poems centered around the theme of footsteps. Take license in interpreting whose footsteps you honor. Translations welcome. We will also be checking with past contributors to the blog about reprinting their pieces. This book is to honor the people instead of the causes. Cars wage war on the environment. Politics change like the newspaper wrapping fish. The invisible still wander. Write to honor the ignored.

After publication it is hoped that each accepted poet will combine readings around food and music with proceeds going to the local homeless network of their choice. This can be through your VA or YMCA programs. This can be like Solid Ground in Seattle – a clearinghouse for poverty. Feel free to contact us with questions. Submission requirements:

1 Response to Footsteps – Call for Poems