My sister Barb once gave me a T-shirt designed to help me remember my roots, my hometown and the pride in which those of us from the Second City have in our town. The message was the same as that pictured below, though the design was different. 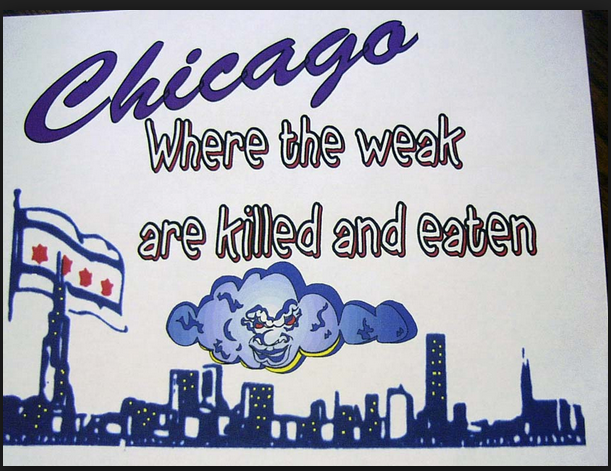 You’re not likely to get far in the Windy City without being able to defend yourself, but 31 years away, or maybe the Cascadia rainrainrain has softened the shoulder-chip we from there might have developed out of a sheer survival instinct. So how to maintain good boundaries, let the fight or flight syndrome ease a bit and develop a genuine Buddhist lovingkindness? I know what you’re going to say: “stop driving!” HA! Well if we make rhetoric out of our arguments with others and poetry out of those arguments (or discussions) with our deeper selves, then maybe there’s some poetry in the latest poems from my series After The Japanese. 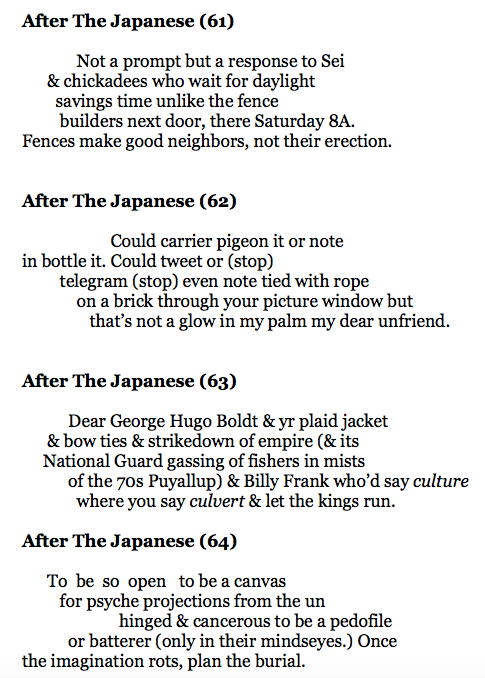 Paul Nelson is founder of SPLAB (Seattle Poetics LAB) in Seattle, the Cascadia Poetry Festival and the August POetry POstcard Fest (PoPo). www.POPO.cards. He has published a collection of essays, Organic Poetry & a serial poem re-enacting the history of Auburn, WA, A Time Before Slaughter (shortlisted for a 2010 Genius Award by The Stranger) and American Sentences, a book of 17 syllable poems drawn from the first fourteen of his 20 years of daily practice. The tenth anniversary edition of that book includes Pig War: & Other Songs of Cascadia. He’s interviewed Allen Ginsberg, Michael McClure, Wanda Coleman, Anne Waldman, Sam Hamill, Robin Blaser, Nate Mackey, Eileen Myles, George Bowering, Diane di Prima, Brenda Hillman, George Stanley, Joanne Kyger & many Cascadia poets (see: https://paulenelson.com/americanprophets/) has presented his poetry and poetics in London, Brussels, Bothell, Cumberland, BC, Qinghai and Beijing, China, Lake Forest, Illinois, Ukiah, CA, and other places & writes an American Sentence every day. www.PaulENelson.com
View all posts by Splabman →
This entry was posted in Uncategorized and tagged After the Japanese, Chicago: Where the weak are killed and eaten. Bookmark the permalink.