You think of the term “gardener” and something mild is evoked, perhaps an older person, but use the term “wildcrafter” and something subversive is suggested, perhaps with links to paganism. Yet there we were, one recent rainy Thursday in Seward Park equipped with raingear and brown bag lunches, a group of twenty or so folks following Permaculturist Michael Pilarski up and down the trails in the old growth forest in Seattle’s backyard.

Wildcrafting is the practice of harvesting plants from their natural, or “wild” habitat, for food or medicinal purposes. It applies to uncultivated plants wherever they may be found, and is not necessarily limited to wilderness areas. Ethical considerations are often involved, such as protecting endangered species. 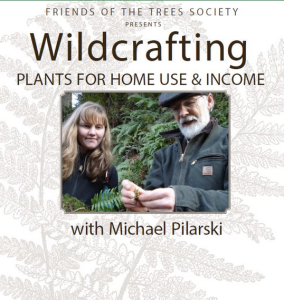 Michael “Skeeter” Pilarski has been a permaculture practitioner for over 20 years. A look back at my archives shows that I aired my first interview with him on 7/14/96!  This would have been at the time I was creating the Mountain Green Report for the late KMTT-FM radio, The Mountain. How did I get away with such subversive material?

In any event, I learned about his North Cascadia Workshop Tour and fortunately for me, he meant the Northern part of the U.S. side of Cascadia, so I did not have to travel to Northern British Columbia. The day was not the best, weatherwise, but I will never look at Seward Park in the same way again. Michael stopped at plants he had something to talk about or ones he was asked about as we tromped through the woods. 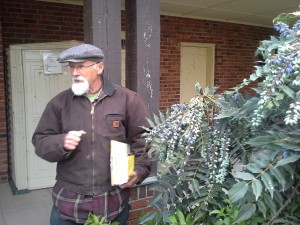 The day began near the children’s playground next to the Audubon Center and with a Chinese cousin of the local plant Oregon Grape. This is the first plant and dig it’s medicinal properties:

“Studies in China show that an alkaloid it contains, called berbamine, helps protect the bone marrow and promotes its recovery from chemotherapy and radiation therapy for cancer. Combined with its bitter digestive-strengthening properties, Oregon grape has an interesting and distinctive combination of properties.” 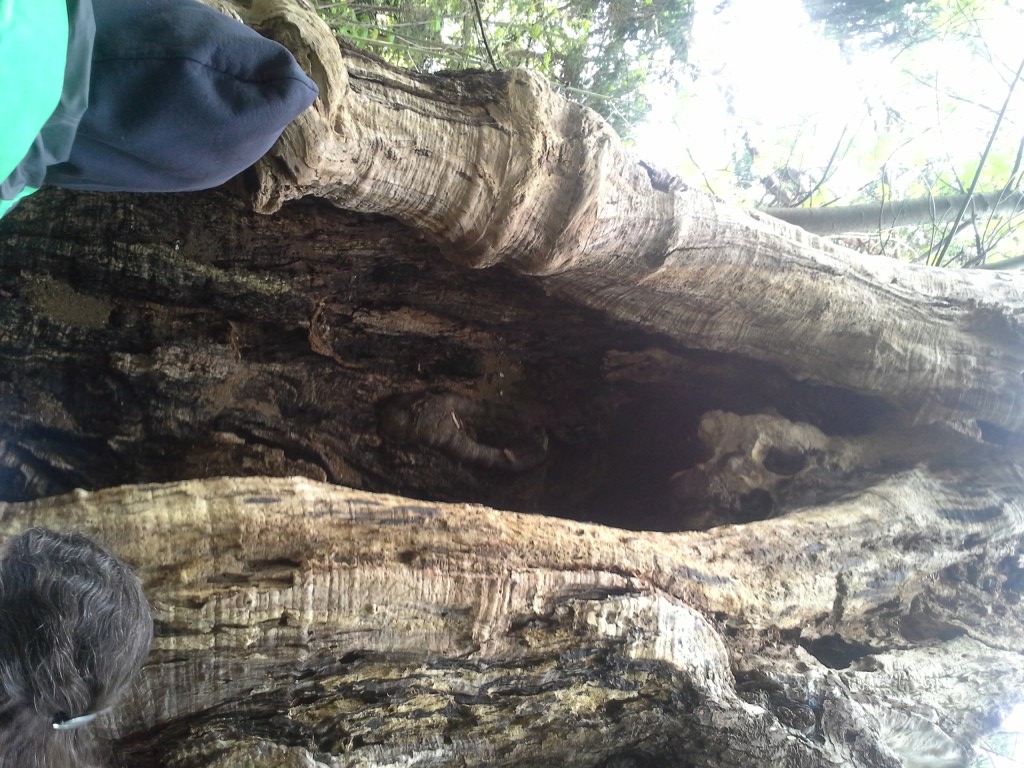 Michael is also the founder of the annual Fairy Congress which happens near Twisp, WA in the Okanogan, and so is open to realms outside of the human and closer to nature. This could explain why he has such an affinity for plants and for the giant tree pictured on the left. He believes that there is wisdom in such trees and old plants. As such he is serious about ethics, such as NOT wildcrafting in city parks. (We took a minuscule amount of biomass during our day in the park.) Those ethics extend to a respect that is similar to how an indigenous person practicing in the traditional ways might act. Hence my first American Sentence of the day:

4.23.15 – Harvest dandelion without but pray before harvesting Devil’s Club. 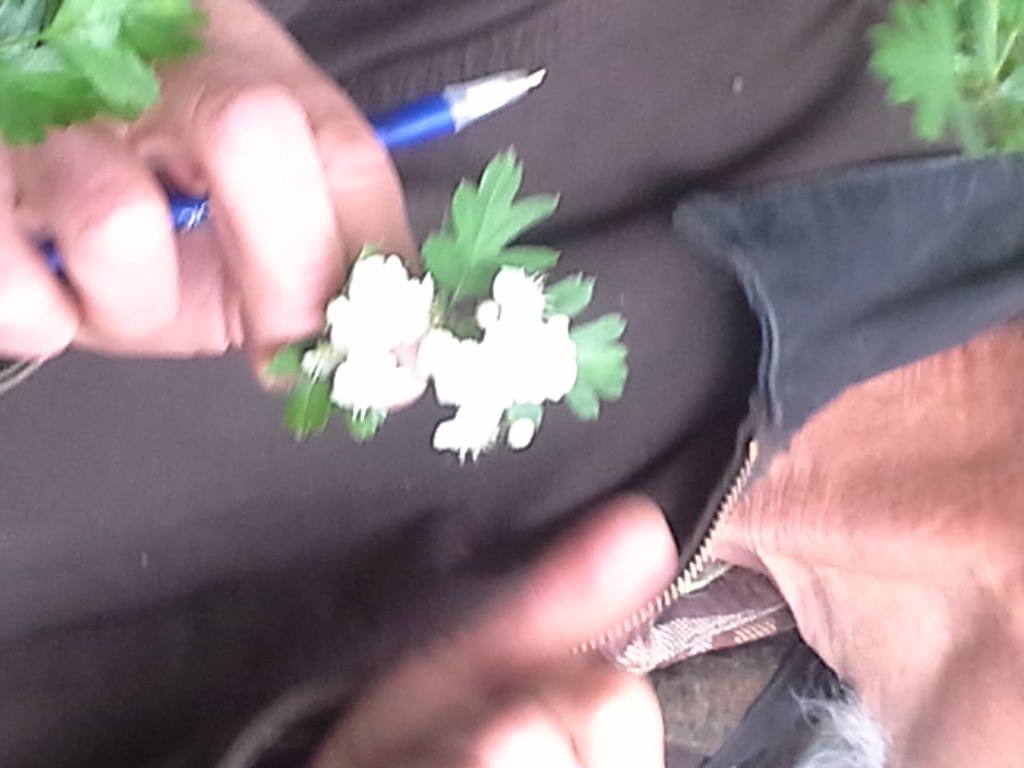 And being new to this, not a permaculture practitioner nor the kind of avid gardener like some of the gathered, I kept quiet for a long time until the plant in question was the Hawthorne tree. My Father was given Hawthorne Berry extract for his heart issues by my longtime Naturopath Bill Mitchell years ago. Sadly, both men are memories now, but the fact that we have Hawthorne berries growing around here suggests that the medicine for what ails you might be closer than you think. And a little wildcrafting knowledge can go a long way, as an American Sentence will show later in this post. Since I filled up the last couple of pages of my pocket journal early in the day, I started texting American Sentences as they came up and ended with a few that seem to have some potency in the context of our day of Wildcrafting: 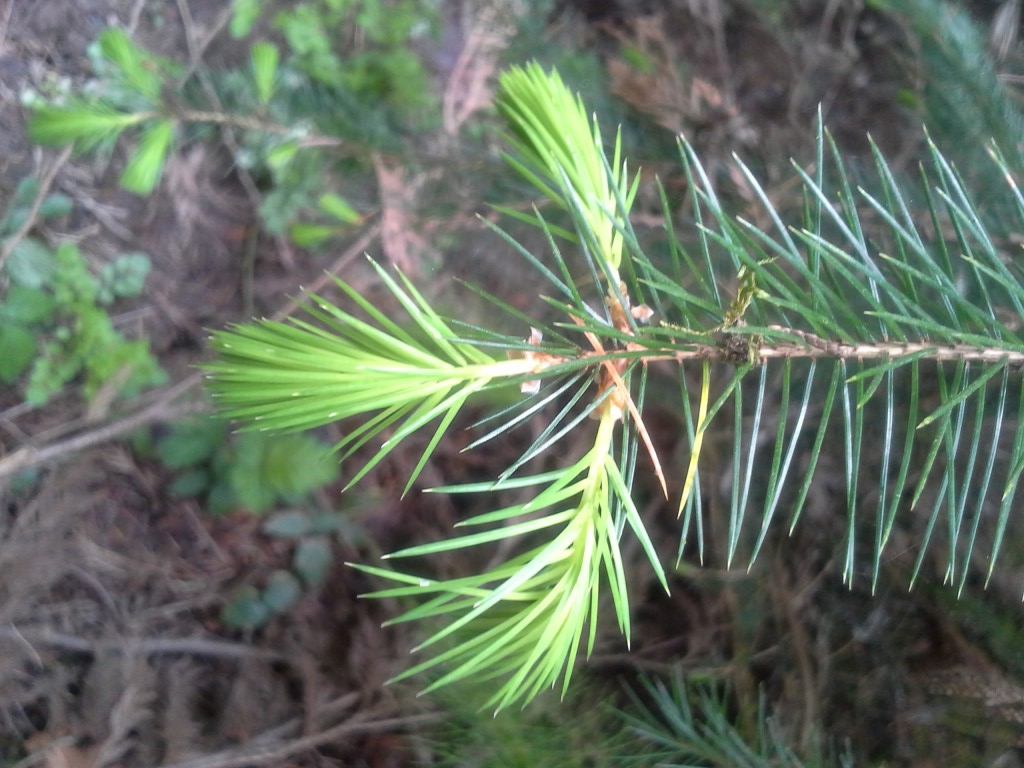 (You should have seen how the excitement on one young man’s face turned sour as the last part of this bit of information came in!)

4.23.15 – Michael says Cattail-on-the-Cob when green does not require bacon.

It was a remarkable day and I would imagine one could hang out with Skeeter for months and still have a lot to learn about the plants of the place in which we live. That medicine is potentially as close as the neighbor’s tree down the block suggests we’ve only begun to actually live in this place, to tap into the magic that awaits us when we develop enough as humans to understand there is a better way to being well than taking a pill.

And in Nanaimo, BC, two weeks after the wildcrafting workshop, I demonstrated the beauty of eating Hawthorne Berry Blossoms. They’re kind of spicy and I can just imagine what the locals were saying: