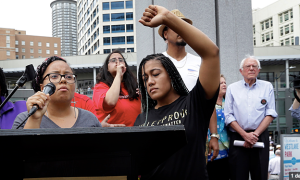 I was at the Bernie Sanders rally yesterday (8.8.15) in downtown Seattle’s Westlake Center where he was interrupted a second time by protestors from #BlackLivesMatter. And I get why it is #BlackLivesMatter and not #AllLivesMatter.

Unemployment, incarceration rates, life expectancy, and any number of statistics show that people of African-American descent in the United States have it much worse than people not of African-American heritage. And what decent person has not read the news or watched the videos of Michael Brown, Freddie Gray, Eric Garner, Trayvon Martin and Sandra Bland in horror? Sandra Bland especially for me, because she was from my hometown Chicago and the video of her being pulled over for FAILURE TO SIGNAL is clear that the officer was overstepping his authority, or trying to teach a lesson, or any number of bullshit reasons that ended up with Sandra Bland being dead in a jail cell. This is an outrage and these events must stop, or there is no hope for this country.

So I went to Latihan today, as is my Sunday practice, and asked to test about why the Subud Greater Seattle community was mostly straight and white. A short discussion ensued as to how to best frame the question, but how I just stated it was deemed appropriate by one Subud Brother who was ALSO at the attempted Bernie Sanders speech and sided with the protestors on his Facebook page. The general consensus of the test was that the folks on this particular Sunday do not have networks where intimate connections would include a lot of Black people or Gay people. Nothing is more intimate that how one accesses the Divine, and Gay people in the U.S. are quite appropriately skeptical, as religion has been used as a cudgel to validate homophobia. But the general feeling was that our community is OPEN to others, should they seek the practice we have been doing in Seattle since 1974. I was “opened” in Subud in 2004. The fact that Subud people are discouraged from proselytizing makes it difficult to reach out to potential members and the aging nature of Subud is also a factor against outreach. That there are vibrant Subud communities in Mexico, Columbia, Indonesia and other places where there are few white people was mentioned as evidence Subud is not a movement for white people, but for anyone who seeks a direct connection with the Divine. Surely we will keep this issue on our spiritual community’s agenda.

And then there is Facebook. Two friends of mine chimed in about the situation and said: 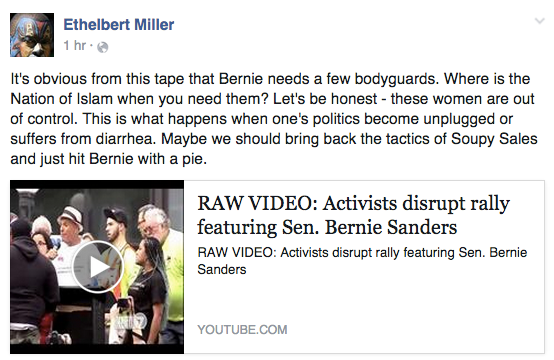 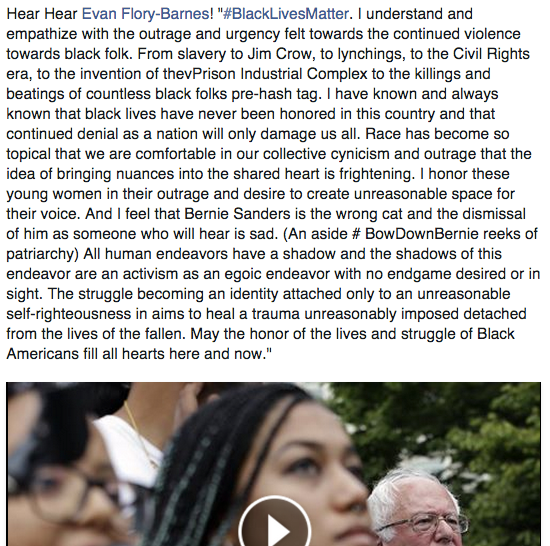 Watch the video and you see the pure hatred in the face of the woman on the right of Sanders. You also hear the “demands” the one on the left makes and Sanders immediately rejects it. When this is met by resistance from many in the crowd, who had been standing in the sun for a couple of hours anxiously awaiting the only Presidential candidate in their lifetime who was not speaking spin and talking points, but had a 30 year record backing up his rhetoric, and you see how hatred begets hatred. But it was a tiny minority in the crowd that acted boorishly. Still, expect the worse from people, act with hatred, contempt and anger and then wonder why that serve is returned with some of the same.

I also think that the lack of respect for elders in our country was illustrated by this action. Old people are disposable, even if they have done the hard, dirty and thankless work of organizing and representing 50 years worth of the right causes, from Civil Rights to Gay Rights to Ending the War on Drugs, to today’s massive economic inequality and evisceration of the U.S. Middle Class. To call the gathered White Supremacists was insulting, false, and does no one any good.

I took a cursory look at the math and found that my hometown, Chicago, has 1.6 Million people of African-American descent. In this whole bioregion, Cascadia, there are perhaps 100,000. This has a lot to do with race relations in Seattle and Portland and Vancouver, BC. This is not white supremacy, this is ignorance at worst. Why did people like Alex Haley and Charles Johnson find Seattle a place to settle down? Because it was a hotbed of White Supremacy? Doubtful.

And speaking of Charles Johnson, what he would advise (as evidenced by a Crosscut article in May) suggests:

Johnson’s essays in Taming the Ox present Buddhist practice as a path to freedom that is “a matter of life and death to black Americans.” He reminds us of the Dharma teaching that though pain is inevitable, suffering is not: We can choose how to respond to pain, and Buddhist practices help us respond wisely. So although black Americans today aren’t responsible for having formed an unjust society, they’re responsible for how they react to injustice, and developing a felt sense of oneness with others can lead to a peaceable, constructive, even compassionate response.

Whites need liberating, too, writes Johnson. White Americans can use the Dharma to free themselves from the centuries of racial indoctrination that have limited them, closed them off in a blind and false sense of superiority, barred them from knowing black people and treating them with due respect.

But sitting and contemplation are hard, slow and boring methods. Getting your picture in the paper and creating hashtags that become popular, surely that’s a sign that you have an influence, right? Or is it a sign of the pathological narcissism of late capitalist culture in USAmerica? When will we do right by Native Americans who were here before ANYONE and have it the worst of all in this society? Do they need to storm the mic too? Do Americans of Cuban descent like me need to storm the mic to force Bernie to put normalizing relations with Cuba in his platform, or can we assume he’s got it right on this issue? I’m inclined to believe he’d do the right thing here too, as evidenced AGAIN by his record.

Yes, the system is corrupt and racist. Yes, the treatment of racial minorities is inexcusable and it has long been past the time to do something about it. (Sanders knows the economic inequality is at the root of it all and people will get that when he’s done talking and legislating.) For changing the system, I’d start with the Seattle Police and demand creation a Civilian Review Board for starters. That would be constructive and would send a message to the rest of the country the way the $15.00 an hour minimum wage did, and I’d be up for that struggle. But if you want to do it with hatred, tremendous disrespect (#BowDownBernie) and the abrogation of someone else’s rights to free speech and freedom of assembly, count me out. I see nothing good coming out of such tactics.