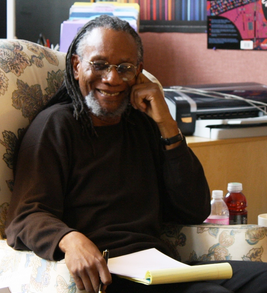 I went to hear Nate Mackey this evening (Wednesday, Sept 30) at the UW and I strongly encourage Puget Sound area literature fans to attend his reading and conversation Thursday, Oct 1 as part of the annual UW Bothell Convergence on Poetics program. His talk tonight was On Breath and Precarity and it spanned Charles Olson, Projective Verse, Robert Creeley, Amiri Baraka, Sun Ra, William Carlos Williams, Denise Levertov, Sonny Rollins, Cecil Taylor, John Coltrane and others. He talked about how “breath was in the air” when he was “coming of age” as far as his poetics were concerned and he tied the two notions, as they relate to the arts (literary and music) that ended in the political, including the infamous dying words of Eric Garner, another black USAmerican killed by police, “I can’t breathe.”

He would end with a poem from the Mu series that had a line that, in light of the deaths of African-Americans at the hands of police, was especially poignant:

Why’d they send us off the planet so soon?

I can’t recommend this evening highly enough. Nathaniel Mackey is a rare poet these days who combines tremendous intelligence, with soul, political relevance, humility and he swings like a motherfucker, in the Jazz sense. See you there and thanks to Jeanne Heuving for arranging his visit.

Nathaniel Mackey is a nationally renowned poet, novelist, editor, and critic known for groundbreaking critical works, including Discrepant Engagement: Dissonance, Cross-Culturality, and Experimental Writing (1993). He has published six books of poetry, includingBlue Fasa (2015), Nod House (2011), and Splay Anthem (2006), which won the National Book Award for Poetry. He has completed four volumes in his ongoing prose project From a Broken Bottle Traces of Perfume Still Emanate (1986-2008). His work employs serial composition and improvisatory modes and draws inspiration from music and Black Mountain (or New American) and Caribbean writers.
Nathaniel Mackey is the Reynolds Price Professor of Creative Writing at Duke University. His distinguished career has earned him multiple awards, including the Stephen Henderson Award from the African American Literature and Culture Society (2008), a Guggenheim Fellowship (2010), the Ruth Lilly Poetry Prize for lifetime achievement from the Poetry Foundation (2014), and Yale University’s Bollingen Prize for American Poetry (2015).