Give Judd Legum credit for using French Philosopher Roland Barthes (dead since 1980) to better understand the ascendancy of Republican Presidential candidate Donald Trump. An article in ThinkProgress digs up some Barthes material from 1957 on the difference between boxing and professional wrestling to better understand The Rise of The Donald in The States. (#American Exceptionalism.) Here’s the salient paragraph: 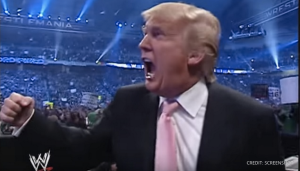 This public knows very well the distinction between wrestling and boxing; it knows that boxing is… based on a demonstration of excellence. One can bet on the outcome of a boxing-match: with wrestling, it would make no sense. A boxing match is a story which is constructed before the eyes of the spectator; in wrestling, on the contrary, it is each moment which is intelligible, not the passage of time… The logical conclusion of the contest does not interest the wrestling-fan… wrestling is a sum of spectacles…

Legum goes on to write:

In the current campaign, Trump is behaving like a professional wrestler while Trump’s opponents are conducting the race like a boxing match. As the rest of the field measures up their next jab, Trump decks them over the head with a metal chair.

Truth is Trump is a pure product of USAmerica. He knows how to rig the system, how to succeed at whatever cost because it is all about competition. He is the ultimate achievement of the industry-generated-culture of these here United States. This should come as no surprise, as the country is a product of hyper-capitalism, media consolidation, plutocracy and la comida basura. You can see why someone like me would be interested in an idea like Cascadia, but cultural projects take a long time, unless of course they fill a gap. An empire failing creates a huge gap, but who knows how long that will take.

And to see the fear that Trump and Ben Carson are eliciting in the folks who comprise my Facebook feed, wow. Truth is all current candidates are only shades better than this, especially Hillary Clinton who has a bit of wrastler in her as well. Bernie Sanders is either the last of a breed of politicians who actually believes what they say, or a harbinger of things to come (like Kshama Sawant here in Seattle) that is, someone with integrity. But Sanders is on the record for continuation of the U.S. war machine and it’s doubtful that a Sanders presidency, still a long shot, would turn much around. After all, he would have to lead a nation that has a significant population that believes people like Donald Trump and Ben Carson are qualified to be President. (And are letting their inner racist come shining through at Trump rallies.)

Real culture precedes politics and my own experience in Washington State Democratic Party politics, when I was (figuratively) stabbed in the back by a “fellow Democrat” shows that there is no integrity from the very bottom levels all the way to the top. The ends do justify the means and an empire crashing is usually not pretty, but maybe we’ll bite the bullet this time. (There will be many bullets. This is USAmerica.)

Poet Charles Potts predicted years ago that the U.S. will surrender this century to the Chinese in Spanish. So far that’s not a bad bet. The Chinese were right about one other thing too, it is a curse to wish that someone “live in interesting times.” Here we are. And I am a Full Nelson.

But back to poetry. I’m preparing my January interview with Cuban poet José Kozer for publication and will end this post with this exchange, which says more about poetry over politics than anything I could write:

Paul Nelson: Well, then this other part of this prologue to the book Anima, talking about the poem being “an act of outward devotion in which the everyday artisanal poem achieves its own mildness of being, imitative of prayer.” So what you’re saying, in a way is, if one takes out the imitative and sees these poems as acts of devotion, you might see them as acts of devotion to the moment and to consciousness and your own life and to the refinement of the goodness in your life, well then this is a spiritual practice.