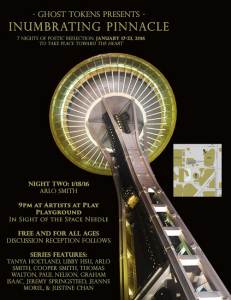 I will be doing readings from American Sentences at two upcoming gigs and one of work completely created for Greg Bem’s latest literary adventure. Dates:

Peter Munro was born in Fairbanks, Alaska in 1957. He was raised in small fishing towns, going through his biggest changes in Sitka, Alaska. This has left him permanently afflicted with a love of fishing. Currently, he lives near Seattle, one of the world’s great fishing ports, with his wife and their two sons.

By day, Munro conducts research fishing in the Bering Sea, the Gulf of Alaska, and the Aleutian Islands. The data are used to help estimate annual harvest levels of commercially important demersal fishes. When not at sea, Munro is chained to a computer, analyzing data and failing to write papers.

By night he makes and says poems.

Raised in the small Tlingit village of Kake, Alaska, Robert Hoffman holds a teaching degree from Sheldon Jackson College, noted for a history of acculturating Alaska Natives. Because both parents were teachers, Robert spent his early childhood moving between Michigan and Alaska. Robert attended the Academy of Art College in San Francisco, but culture shock and homesickness brought him back to Kake. He was a substance abuse counselor at a Native treatment center, where he studied the effects of intergenerational trauma. He has lived the past sixteen years with his wife Kris in Sitka, Alaska, where he works at the historic Sheldon Jackson Museum. Robert uses his art and writing as a way of reconciling history. He says, “Poems come to me from my ancestors, a connection to place. In the tradition of our storytellers, my poems transport audiences to places located in memory, shrouded in myth. I write poems specific to Tlingit country, but their themes of grief. loss and longing are universal.”