I Sing the Body Apoplectic (to) Make The Pie Higher 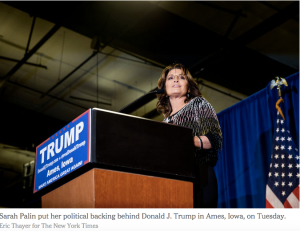 It takes years for most poets to learn a craft and then unlearn certain rules, or learn how to creatively break them like playing with syntax, making abrupt subject changes and other techniques associated with the Euro-American avant-garde. But to some people it comes naturally. Forget that this example is not shooting (pun intended) for poetry, but for political discourse, but that is besides the point.

And I get SICK of people posting on Facebook (or where ever) the latest stupid thing Tronald Dump or Parasalin’ is sayin’ goshdarnit BUT Michael Barbaro’s deconstruction (or explanation) of Parasalin’s “endorsement” of Tronald Dump in the N.Y. Times today was magnificent. One excerpt:

“And you quit footing the bill for these nations who are oil-rich, we’re paying for some of their squirmishes that have been going on for centuries. Where they’re fighting each other and yelling ‘Allahu akbar,’ calling jihad on each other’s heads forever and ever. Like I’ve said before, let them duke it out and let Allah sort it out.” (Palin)

Here, Mrs. Palin accomplishes many things unusual for a political speaker: She recites the Arabic phrase for “God is great,” and, more notably, coins a new word, squirmishes, a cross between squirm (which means to wriggle the body from side to side) and skirmish (which means a brief fight or encounter between small groups). Twitter embraced the new term instantly.

Wow. Do a few Muslim-on-Muslim skirmishes make you squeamish? Do they make you squirm? Wow.

But then Jason O. Gilbert in Fusion.net took the words to a new level with his Whitmanization of Parasalin. Dig:

I Sing the Body Apoplectic

We all have a part in this, we all have a responsibility.
Looking around at all of you, you hard-working Iowa families.
You farm families! And teachers! And teamsters! And cops, and cooks!
You rockin’ rollers! And holy rollers!
All of you who work so hard,
You full-time moms!
You, with the hands that rock the cradle!
You all make the world go round,
and now,
Our cause is one!

What the heck would the establishment know about conservatism?

Tell me, is this conservative? GOP majorities handing over a blank check to fund Obamacare,
And Planned Parenthood,
And illegal immigration that competes for your jobs,
And turning safety nets into hammocks,
And all these new Democrat voters that are going to be coming on over border
As we keep the borders open,
And bequeathing our children millions in new debt,
And refusing to fight back for our solvency,
And our sovereignty,
Even though that’s why we elected them and sent them as a majority to DC?

If they’re not willing to do that,
Then how are they to tell us that we’re not conservative enough?
Who are they to say that?

Oh tell somebody
Like, Phyllis Schlafly,
She is the Republican,
Conservative movement icon
And hero
And a Trump supporter.
Tell her she’s not conservative.

How ‘bout the rest of us?
Right wingin’,
Bitter clingin’,
Proud clingers of our guns,
Our god,
And our religions,
And our Constitution.
Tell us that we’re not red enough?

Yeah, coming from the establishment.
Right.

This kind of poetry is near the achievement of George W. Bush’s famous “Make The Pie Higher.” We all want higher pies, right?

This following poem is composed entirely of actual quotes from George W. Bush.

I think we all agree, the past is over.
This is still a dangerous world.
It’s a world of madmen
And uncertainty
And potential mental losses.

Rarely is the question asked
Is our children learning?
Will the highways of the internet
Become more few?
How many hands have I shaked?

They misunderestimate me.
I am a pitbull on the pantleg of opportunity.
I know that the human being and the fish
Can coexist.