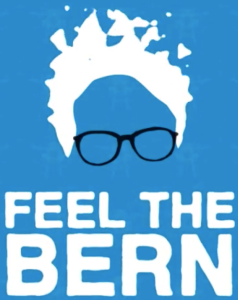 I had been living in Seattle for less than a year when I read an article, or maybe an ad in The Nation magazine, that Bernie Sanders, a Socialist from Vermont, was running for Congress. I think I sent $25 and lo and behold he won. He has won a lot of campaigns since then, but surely the current campaign is the most ambitious and with it the real prospects for humans all over the planet.

As astute commentators have pointed out, Sanders is running a campaign to reinstate the New Deal. Brian Leiter points out that FDR’s policies were untouchable until Ronald Reagan’s election in 1980, one that was made possible by treasonous acts.

But the Reagan agenda (astutely ridiculed by Gil Scott-Heron in his 1980 epic B Movie) have been in place since 1981 and with it the decimation of the middle class, union membership (see PATCO), the vast expansion of homelessness, the mining of the harbor in Nicaragua, the support of the terror-training branch of the U.S. government – the School of the Americas, the complete refusal to act for the first few critical years of the AIDS crisis, the deregulation of S&L’s, and many other atrocities.

As you can see in the chart, between the 1930’s and the 1970’s, the United States drastically reduced economic inequality. It redistributed wealth from the top to the middle and the bottom, resulting in consistent wage increases and consequently consistent consumption increases. This allowed investment to be put to effective use–because the bottom and the middle were rising, they were able to support the additional spending that business owners needed to successfully expand. This was accomplished through a series of policies that if they were proposed today, would strike most Americans as socialist–Social Security, Medicare, Medicaid, welfare, strong union rights, high minimum wages, high marginal tax rates on the wealthy (with a 90% top rate under Eisenhower), and strong enforcement of financial regulations and anti-trust laws.

Democratic presidential candidates that can be associated with this ideological tradition include Franklin Roosevelt, Harry Truman, Adlai Stevenson, John F. Kennedy, Lyndon Johnson, Hubert Humphrey, and George McGovern. That’s it. Starting with Jimmy Carter in 1976, the Democratic Party became something different, something that was no longer ideologically continuous with this. Even the Republican Party to a large degree acknowledged the need for these policies during this period–Eisenhower and Nixon supported and even extended parts of this system that kept investment and consumption in balance.

Or as someone writing under the pen name of Hollywood says in the Village Voice, we’ve gotten used to “fuckery.” And this is the worst legacy of Reagan, Bush, Clinton, Bush and Obama, the narrowing of the possible, or the cultural bandwidth. It makes people with humane attributes appear like hopeless dreamers. It makes people think that someone with some of the highest negativity ratings in presidential campaign history, Hillary Clinton, “more electable” than someone advocating what was the status quo for half a century, one that was quite positive for middle class USAmericans. Of course that HRC won two categories in the recent New Hampshire primaries, old voters (65+) and rich voters, you get a sense that the times are a changing and one candidate recognizes this and one thinks Neo-liberalism is just fine. Andrew Levine writes otherwise:

What was not clear until now is potentially as important. In Iowa it was demonstrated, beyond a reasonable doubt, that it is possible, here and now, to stave off a Clintonite Restoration – possible, that is, to free the country and the world from the thrall of neoliberal-neoconservative politics.

For anyone who cares about economic, racial and gender equality, and about restoring basic rights and liberties and establishing a just and humane social order – and for anyone who wants to diminish murder and mayhem and terrorism around the world, and to protect the earth and everything in it from the ravages of capitalist greed – getting the United States off the neoliberal-neoconservative track that it has been on since at least the late 1970s should be Priority Number One.

And Aaron Bastani in the London Review of Books points out:

The transformation in American politics since George W. Bush won a second term in 2004 is remarkable. Changing social attitudes on a range of issues, from race to gay rights, are remaking the country. Non-medical use of cannabis has been decriminalised in several states, and same-sex marriage has been legal nationwide since last June. Barack Obama arrived in office heralded as a liberal, but he has been repeatedly outflanked by movements to his left, in particular on income inequality and police violence against people of colour. The most important social movement of his presidency wasn’t the Tea Party; it was Black Lives Matter. Ask anyone who watched the half-time break at Super Bowl 50. 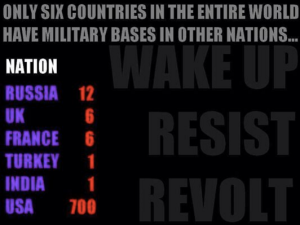 To my friends that support Hillary Clinton, check your privilege and vote with your heart and soul. The first woman president will face AT LEAST the kind of 24/7 opposition Barack Obama has faced. Let’s make sure we get the right woman for the job. Elizabeth Warren comes to mind. For those who understand the cultural possibilities Bernie Sanders brings to this nation, this is just the beginning, as Sanders says nothing on the presidential campaign trail about the evil U.S. empire and we will need to hold him accountable for its dismantling and liquidation to fund human-centric programs.

Diane di Prima continues to be prophetic: “The only war that matters is the war against the imagination. All other wars are subsumed in it.”