The tab for a certain online newspaper article has been open on my browser since about April 15, when it was published. I moved it over from #3 to #36 today (yep, 36 tabs open right now) and have not closed it since. The article hits a nerve with me, starting with the picture of two people I classify as evil. One of them was President the very year I got my B.A. and joined the workforce, only to have my chosen career cut down thanks to deregulation, a chief part of the operating ethos of said President. That ethos is Neoliberalism. 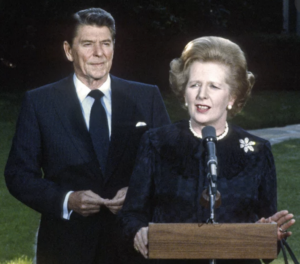 Neoliberalism sees competition as the defining characteristic of human relations. It redefines citizens as consumers, whose democratic choices are best exercised by buying and selling, a process that rewards merit and punishes inefficiency. It maintains that “the market” delivers benefits that could never be achieved by planning. Attempts to limit competition are treated as inimical to liberty. Tax and regulation should be minimised, public services should be privatised.

Yeah, dig the original English spellings of certain words above. It’s because in the U.S., we now get our most incisive commentary from The Guardian and other overseas news sources. Why is this? (I’ll come back to this.) The article, written by George Monbiot, points out that neoliberalism is the operative paradigm in the West and most people can’t define it, but they live their lives by the ethos outlined in the paragraph above. One can say that this is also materialism, but that’s an exercise in splitting hairs.

But it was the article’s conclusion that stuck in my craw. Monbiot writes:

Neoliberalism’s triumph also reflects the failure of the left… What the history of both Keynesianism and neoliberalism show is that it’s not enough to oppose a broken system. A coherent alternative has to be proposed. For Labour, the Democrats and the wider left, the central task should be to develop an economic Apollo programme, a conscious attempt to design a new system, tailored to the demands of the 21st century.

And that notion also stayed with me for these last three+ weeks. But then it hit me that the radio interview programs I started conducting in 1990, and self-syndicated through the non-profit organization that is now known as SPLAB (Seattle Poetics LAB), these were all articulating in some way an ethos that was alternative to neoliberalism. Benjamin Studebaker calls it Left, Egalitarianism, and that’s a good working title.

And while I produced over 450 hours of original interview programming, mostly in the years 1990-2004, there were hundreds of them that support, or articulate a more holistic vision than the soul-killing non-ethos of neoliberalism. I am trying to digitize as many of these interviews as possible and you should see these old reel-to-reels! Those that are digitized, or the later interviews that never aired on the radio, are stored under the rubric of American Prophets. Some examples over the years of the programs:

Subject: Integrating Traditional and Modern Medicine
Guest: Leslie Korn, Ph.D.
Length: 2 @ 23:00
Contact: Center for Traditional Medicine
Date Aired: 4/25/04
Summary: Dr. Leslie Korn holds a Masters in Public Health from Harvard, a Ph.D. in Behavioral Medicine and Medical Humanities and is the Founding Director of the Center for Traditional Medicine in Olympia, Washington. She discussed the Center, its history, the effect of trauma on health and modalities used to reverse the effects of trauma such as therapeutic touch.

Subject: The History of the Decline of Wild Salmon
Guest: David Montgomery
Length: 2 @ 22:00
Contact: Puget Sound River History Project or King of Fish
Date Aired: 2/22/04
Summary: David Montgomery is a Professor of Geomorphology at the University of Washington and author of: King of Fish: The Thousand Year Run of Salmon. He discussed the power of wild salmon to alter streams, their incredible resilience to natural disasters and the history of the decimation of salmon runs in Europe and the Atlantic Coast of North America characterized by Four “H’s” including harvesting, habitat, hydropower and hatcheries.

Subject: Economics of Terror
Guest: Loretta Napoleoni
Length: 2 @ 22:00
Contact: Modern Jihad
Date Aired: 1/18/04
Summary: Loretta Napoleoni, economist, political analyst and author of Modern Jihad: Tracing the Dollars Behind the Terror Networks, discussed the New Economy of Terror, funding sources for terror groups, such as heroin and the missed opportunities for creating democracy in Afghanistan after the end of the war between the Mujahadin and the Soviet Union.

These interviews all aired within a span of a few months. For more interview summaries from that year, see: https://globalvoicesradio.org/hour.html. At the top of that link you’ll find links to summaries from previous years.

The way ahead necessitates that we stop treating people as mere products or consumers. Humans are not disposable and we’re going to learn that the hard way, but I would not be surprised if some enterprising Millennial uses some of that spare time they might have these days to start coming up with alternatives to what we have now, which about 99% of the population seems to understand is crumbling. Alternatives which money can’t corrupt.

Earlier in this piece I asked why is it that USAmericans have to get their most incisive commentary from The Guardian, a British Newspaper. The deadly combination of Neoliberalism and Materialism is so profoundly a part of the psyche of USAmericans, reinforced with every billboard, TV ad, every website ad banner, that humans here don’t even know they’re swimming in it. They post horseshit articles like “Voters who consider themselves Bernie or Bust can do so only out of privilege.” (Oh, the Guardian ran that too.) Classic neoliberal tactic. Take your weakness and charge the other guy with it. This is what passes for an inner life in the U.S. in 2016. This is the soul of its most popular literature, its movies and is the ultimate theme of the vast majority of its MFA-culture poets. As one Slam poet put it, life is about longing to “have orgasms in 5 star hotels.” It’s a symptom of the end of empire and evidence of the curse of our “interesting times.”