It’s a Facebook meme and these are worth the paper they’re printed on, but I though this one was pretty good, so I shared it. I’d seen Jeremy Rikin give a lecture at Town Hall, discussing the sharing economy and the possibility that 3D printers will make work as we know it obsolete. Here’s the image: 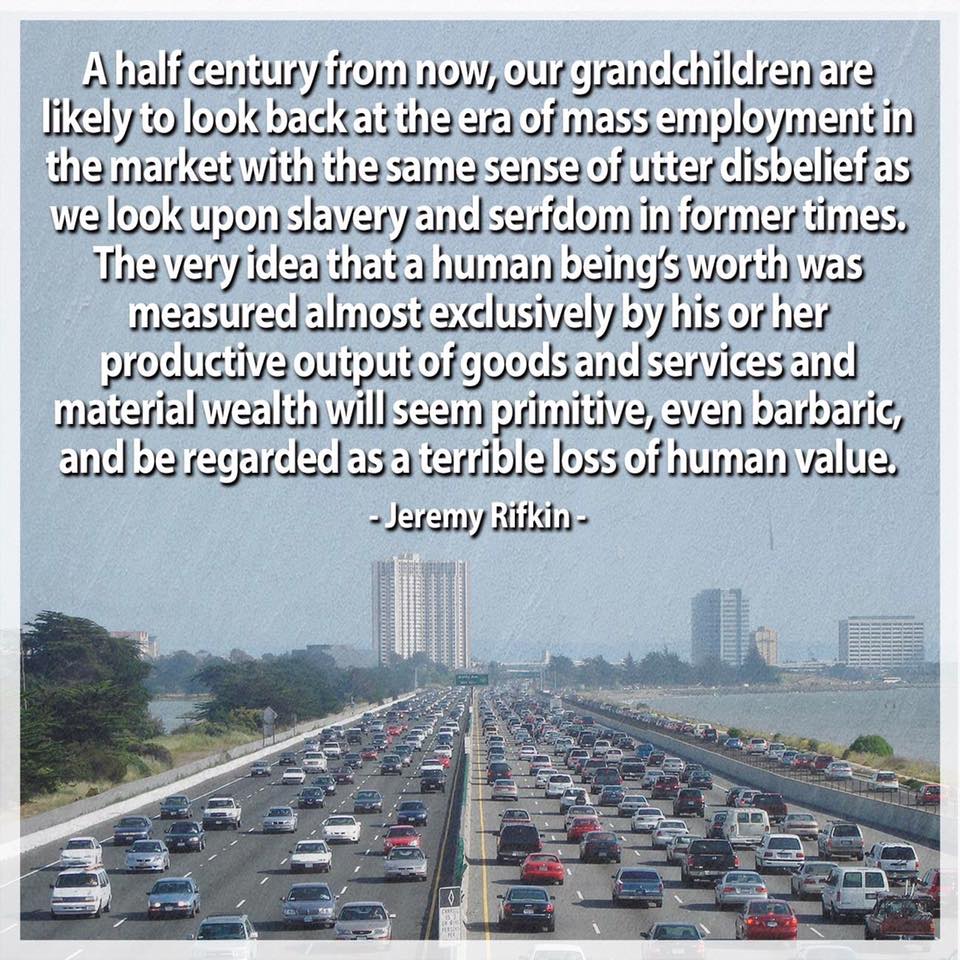 I did not think that would be controversial on my Facebook wall, but I did get some grief for it from one commentator. When asked to suggest ways in which Rifkin was wrong, what it is this culture is producing that will be seen as a gift to humanity, he was silent, or maybe other things, more interesting ones, came across his screen.

& I was reminded of Peter Berg. The man who did more than anyone else to develop the concept of bioregionalism, he defined that movement as the effort to craft a way of life and a means of support appropriate to the natural characteristics of the particular place where one lived. Imagine your country not as something drawn with straight lines, but as nature has created natural boundaries, and then learn to reinhabit that place sustainably. Cascadia is but one manifestation of this notion and the thought is we can save the biosphere one bioregion at a time.

In keeping with the spirit of the Facebook discussion, I created an image with a Meme Generator: 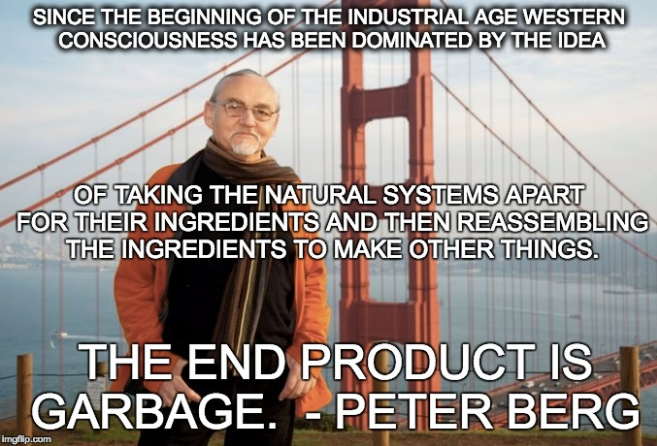 The whole quote from the book The Biosphere and the Bioregion: The Essential Writings of Peter Berg states that Berg quoted Lewis Mumford as dating The Industrial Age as beginning when the first iron bridge was built in England, in the seventeenth century. Berg:

Since that time, Western consciousness has been dominated by the idea of taking natural systems apart for their ingredients and then reassembling the ingredients to make other things. This is a chemical trick that has been enormously powerful –I’m not going to say “successful” because the end product is garbage. The end product of the cars and refrigerators, all the rest of it, is a landfill or a dump. But the trick of it was that you were no longer bound by the restrictions of the natural resources of the place where you live. Once this Industrial Age consciousness became the main consciousness, inhabitation was no longer thought to be necessary or useful or practical. It became limited to the people with “insufficient intelligence” to be able to participate in the industrial trickery, the transformation of nature’s ingredients into products. Consumer identity came from this (3).

So what next? Millennials by and large have seen what happened to their parents and are overwhelmingly supporting the campaign of Bernie Sanders. The system is rigged and there is evidence capitalism as we know it is crashing. And then there is the notion of a Guaranteed Basic Universal Income. From Basic Income Earth Network (Bien!) comes:

A basic income is an income unconditionally granted to all on an individual basis, without means test or work requirement. It is a form of minimum income guarantee that differs from those that now exist in various European countries in three important ways:

Can you imagine how small towns in the U.S. would be reinvigorated by people wanting to make the most of their basic income, going where the housing costs are cheapest as their music, painting, poetry or other hobbies are being subsidized? Transportation would not be in issue in a town where you could walk, or ride your bike, to the grocery store, cafe, bar, &c. And I think of Buckminster Fuller’s notion that if millions of people were not required to work, that eventually that free time would allow them to come up with some invention that would pay for all of their leisure time and thus, would be worth the investment. Surely we’d be having more fun. And if there are trillions illegally hidden in off-shore accounts, the money is there to fund this if we can muster the political will to make it happen?

Who is up for the challenge of stating what gifts to humankind the US has offered and proving Rifkin wrong? The comment section is open.