I am delighted to be represented in The Capilano Review’s special web folio for Jamie Reid who died last year. Download here. 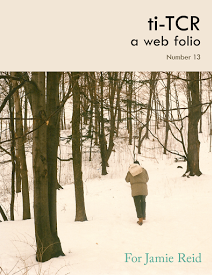