I am blessed to have work in TWO anthologies coming out in the next two weeks. The first is the South Seattle Emerald‘s Emerald Reflections: A South Seattle Emerald Anthology. It comes out of the vibrant activist mind of Marcus Green, the Publisher of this lively and unabashedly Left-Wing online newspaper which chronicles life in the Rainier Valley.

Paul Constant’s review in the Seattle Review of Books of the Emerald AND the book seem quite accurate, from what I know about each. (Disclaimer: I recruited poets and some prose writers for the book.) Of the SSE, Constant says:

The Emerald is an especially significant publication because it gives voice to a part of the city that has always been underserved in the media. For decades, local television stations, daily newspapers, and alternative weeklies portrayed a Seattle that, geographically speaking, started at Pioneer Square and spread only northward, past the ship canal and into Ballard and Fremont and other lily-white neighborhoods…

and of the book:

The Emerald’s enthusiastic institutional voice is Green’s voice, and his introduction is a characteristic love letter to the south end of Seattle:

The richness of culture and ethnic diversity bursting from its borders is unparalleled anywhere else in America. From restaurants where Tagalog hums over the sounds of street cars along Rainer Avenue to coffee shops where Ethiopian baristas serve a blend of Harrar, its powerful aroma of blueberries drifting up the nostrils of passersby, who will later on flood into music lounges, adding their personal hue to a mixture of complexions, genders, and creeds; all of them housed under one ceiling, congregated in collective experience.

There is a book release party Thursday, October 27, 2016, at 7pm at 3rd Place Books in Seward Park, in the building that once housed PCC for many years. I will be one of many readers, including: Dustin Washington, Darozyl Touch, T Clear, Guy Jean-Paul Chevalier, Monique Franklin, Kayla Blau, Larry Crist, Lola Peters, Jerrell Davis, Mahogany Cherrelle, Minnie Collins, Alvin LA Horn, Reagan Jackson and Marcus Green. 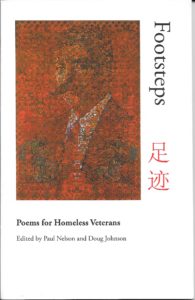 The book benefits Homeless veterans and there will be a ritual candle vigil and poetry reading November 11, 2016, at the Vermillion Gallery & Bar, 1508 11th Ave, Seattle.

That Doug gave me a lot of leeway to select poets whose material was not necessarily vet-related, but echoed the Footsteps theme somewhat, is a testament to his openness and spirit of collaboration. Non-Cascadia poets included in the book are José Kozer and Amalio Madueño. Sam Hamill and Charles Potts are also in the anthology and I am proud to be associated with both of these efforts.