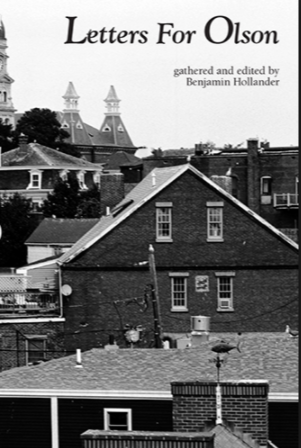 Wonderful to see the review of Letters for Olson by Brooks Johnson in Hyperallergenic and just to have this book in the world. The headline of the article states well this book’s theme:

In Letters for Olson, the reader is reminded repeatedly that the intellectual projects of Charles Olson and his students were aspects of a larger cultural transformation, which began in the 1940s and continued into the early ’70s.

A theme that emerges organically given it is a collection of essays by different writers. And very early in the review Johnson writes that Olson:

…proposed not just a thoroughly innovative mode of poetic composition, but, crucially, a call for a renewed poetic relation to the world: the revolutionary formal principles of his “projective” poetics are deeply rooted in a drive to investigate and recover neglected energies of the human and geological past. Olson’s poetics, then, represents an epistemological claim — a methodology through which one’s specific attentions and movements through the world (geographic space) function as a contingent aspect of historical investigation. His poetics evinces a way of being in and of history; it is a modality of knowledge rather than one of style. In this context, it’s possible to coherently talk about resonances of Olson’s influence in works as varied as Lorine Neidecker’s (sic) Lake Superior, Robert Duncan’s The H.D. book, and Ed Dorn’s Gunslinger.

First of all, that’s a great legacy. One can tell if one has been “of use” by having this kind of influence, and this is just three of perhaps 1,000 poets who have been influenced by Olson. Second of all, so wonderful to begin to move past the theory decade, which is more like 30 years of Deconstruction and now Identity Poetics, a mode that will certainly be challenged by the North American Neo-Fascist era beginning January 20, 2017. Olson’s poetics become just more critical and relevant, as Miriam Nichols perceived and articulated in her book Radical Affections: The Practice of Outside. She writes:

Olson proposed a new kind of geopoetics that would include history, geology, anthropology, the arts and sciences, technology (typewriter, car television, atomic bomb), myth dream and memory… His polemic against Western metaphysics, Plato to Melville, comes of the conviction that humanity has so anthropomorphized its own material life and that of nature that it has mistaken the mental realm of concepts for reality as such. This, in the wake of Auschwitz, he judged to be dangerous (270).

We’ve seen in the U.S. how this mental realm/world view manifests not only in the neo-fascism now set to take power in the U.S., but also the neoliberalism that made the ground ripe for neo-fascism, as Naomi Klein illustrates here. Excerpt:

Here is what we need to understand: a hell of a lot of people are in pain. Under neoliberal policies of deregulation, privatisation, austerity and corporate trade, their living standards have declined precipitously. They have lost jobs. They have lost pensions. They have lost much of the safety net that used to make these losses less frightening. They see a future for their kids even worse than their precarious present.

At the same time, they have witnessed the rise of the Davos class, a hyper-connected network of banking and tech billionaires, elected leaders who are awfully cosy with those interests, and Hollywood celebrities who make the whole thing seem unbearably glamorous. Success is a party to which they were not invited, and they know in their hearts that this rising wealth and power is somehow directly connected to their growing debts and powerlessness.

Critiques of neo-liberalism are coming in from other sources as well, as disparate as Saturday Night Live: 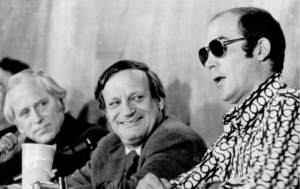 and The Nation, where Susan McWilliams reminded us of what Hunter S. Thompson predicted 50 years ago by hanging out with Hell’s Angels, that “left-behind people” would be motivated only by “an ethic of total retaliation.”  She writes:

…the idea that Trumpism is “populist” seems misplaced. Populism is a belief in the right of ordinary people, rather than political insiders, to rule. Trumpism, by contrast, operates on the presumption that ordinary people aren’t going to get any chance to rule no matter what they do, so they might as well piss off the political insiders using the only tool left available to them: the vote…  What made that outcome [“the rise of ‘retaliatory, right-wing politics that now goes by the name of Trumpism'”] almost certain, Thompson thought, was the obliviousness of Berkeley, California, types who, from the safety of their cocktail parties, imagined that they understood and represented the downtrodden. The Berkeley types, Thompson thought, were not going to realize how presumptuous they had been until the downtrodden broke into one of those cocktail parties and embarked on a campaign of rape, pillage, and slaughter. For Thompson, the Angels weren’t important because they heralded a new movement of cultural hedonism, but because they were the advance guard for a new kind of right-wing politics. As Thompson presciently wrote in the Nation piece he later expanded on in Hell’s Angels, that kind of politics is “nearly impossible to deal with” using reason or empathy or awareness-raising or any of the other favorite tools of the left.

And who was the standard-bearer for these “oblivious Berkeley cocktail types?” Well, let’s just say they are still blaming Bernie Sanders, Russia and Jill Stein for the 2016 U.S. Presidential election results. Which makes Olson’s linking of the anthropomorphism of material life (let’s call it materialism or neoliberalism) to Auschwitz prescient. How do we get beyond what we have now to a society that works for all people when the DEMOCRATS don’t even get the basic message of the election, that the left-behinds are not going to go down quietly? Control of Trumpism will likely require brute force, or something unspeakably tragic. Nichols continues on Olson:

…rather than lay down precepts designed to control such behaviors–that would be the business of philosophers, legislators and politicians–the poet tries to expand the alternatives available to the imagination. The scholar-poet thus makes him or herself as aware and responsive to the variable measures of his or her world as possible, thus to maximize the options (271).

Ruth Lepson in Letters for Olson brings up the Olsonian notion of proprioception as another angle on his program or method when she writes:

…proprioception is anyone’s life, attentively lived, breathed, felt, the sincerity of living in one’s senses and rooting oneself in what one experiences, translating that through the breath and the heartbeat and the intellect and of course–what else could it be–an individual way… (103)

Having read and reread Creeley on Olson, Levertov on Olson, Duncan on Olson, critics on Olson, and lately having paid attention to Larry Eigner, I know that projective verse, or organic verse as Denise calls it, or poetry by field–which overlap–is the poetry of our time that will survive… (100).

Ruth Lepson’s essay is one of several worth reading and worth buying the book for, and to look at over and over. Another is Yorio Hirano’s, who translated The Maximus Poems into Japanese and offers What I See in the Maximus Poems of Charles Olson. An essayist writing under the moniker Carla, the letter b offers a wonderful smack-down of Heriberto Yepez that puts his attempt at a book/hit-piece on Olson into proper perspective.

Time for serious people to expand the field and the imagination. The war we’re about to experience has many fronts, but as Diane di Prima knew, they’re all subsumed in the war against the imagination.