James Baldwin Is Not… 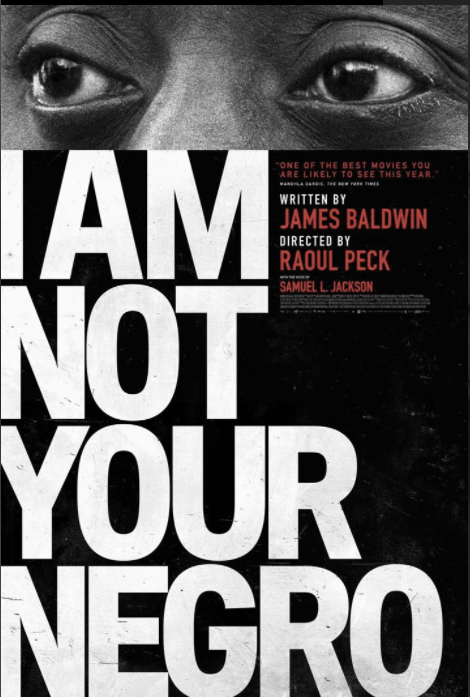 Last Friday I saw, for the second time, the Raoul Peck masterpiece “I Am Not Your Negro.” A very astute New York Times review by A.O. Scott suggests that the film utilizing the words of James Baldwin, many from an unfinished bit of writing near the end of Baldwin’s life, is:

a thrilling introduction to his work, a remedial course in American history, and an advanced seminar in racial politics — a concise, roughly 90-minute movie with the scope and impact of a 10-hour mini-series or a literary doorstop…

Though its principal figure, the novelist, playwright and essayist James Baldwin, is a man who has been dead for nearly 30 years, you would be hard-pressed to find a movie that speaks to the present moment with greater clarity and force, insisting on uncomfortable truths and drawing stark lessons from the shadows of history.

Scott calls the film “life-altering” and it is not hyperbole.

I went to see it again Friday night specifically because it was being shown at the Ark Lodge Cinema in Columbia City (Seattle), my neighborhood theater, and because a panel discussion after the screening was to be organized and facilitated by the South Seattle Emerald.

The film did not disappoint in its second viewing, and I found myself weeping over and over at ugly scenes in American history, some in my home town Chicago, which hit especially hard, but watching a second time allowed me to take some notes, sometimes in the dark and sometimes in cursive! (Who writes in cursive anymore?) Here are some of my notes with some elaborations I’m adding after the fact.

“What will happen to this country?”

This is the first thing I wrote down and it echoes something Charles Johnson said at his January 12, 2017, public appearance at Folio. That is, is this country worth saving? This was one of the questions I would have had for the panel if I felt it was my place to ask the panel a question, which I did not. Since Baldwin said this in the 60s or 70s (he died in 1987) you can only imagine what he’d think now. And does it make sense to allow so much power to be in the hands of one man? Would the continental U.S. better serve its inhabitants by being split up into 8 or 9 smaller countries? (Hawaii deserves its own independence and I’d let Alaska go too, except for the panhandle which is part of Cascadia, but I digress.) One thing about the U.S. in 2017 is that the separation of the three branches of government does seem to safeguard the country from the possibility of a “caudillo” to use a phrase a friend used when expressing the glee expressed by some of her friends in Latina America, delighted the U.S. is getting a taste of its own medicine. There is some solace.

“When  dark face opens the light seems to go everywhere.”

What can be said about a quote like this except that the U.S. will be judged by how its most repressed citizens are treated and, given Ferguson, Travon Martin, Eric Garner and the hundreds of recent police executions, the grade is not going to be good.

Quintessential humility. There is something in Baldwin’s writing and his being that exudes a quiet confidence and humility. That my Dad had a shoeshine kit and taught me how to shine shoes is part of the reason I made a note of that.

This is not something Baldwin said, but a note for a potential question that I would not wind up asking. Seattle is supposed to be a bastion of progressive thinking, and yet in 2011, the U.S. Department of Justice found that the Seattle Police department engaged in a pattern of excessive use of force that violated the Constitution and Federal law. Should there be a civilian review board in Seattle? Of course. What does it NEED to become a reality? About 20,000 local white residents demanding one.

“Death of the heart of this country.”

Again, remember we’re talking 1963-1980 or so, at very least 37 years ago, before Ronald Reagan, before the vast stretch of neoliberal presidents, before permanent violent foreign U.S. occupations. (All against people of color.) If Baldwin was right, and there is not one Baldwin statement in the film for which I have a rebuttal, not a single one with which I even have a minor disagreement, then why continue to work to get places like Wyoming and Alabama on the same page as places like Seattle, Washington and Portland, Oregon? Would our time be better spent by negotiating a peaceful withdrawal from this experiment in democracy? These states are far from United anymore and any country that can elect someone as obviously corrupt and incompetent as the current President may not be worth saving. That the country is no longer functioning as a democracy anymore is more evidence a radical change is needed. I can’t make a balkanization happen, but can continue to focus on my own bioregion, its needs, can continue to investigate the culture here, while maintaining the very basics in citizenship: passport, taxes, &c. until such time as a peaceful re-division of the states is accomplished.

“A matter of responsibility.”
“Public Stance vs. Private Life.”
“Guilty and constricted White imagination.”
“Infantile, furtive sexuality of this country.”
“So irresponsible and so dead.”
“The lives we lead on this continent are empty, tame and ugly.”

I was writing as fast as I could at some moments and may not have gotten quotes exactly correct, but these are all true and all an indictment of the citizens of this country and the industry-generated culture. More importantly, they are prophecy, as it has all gotten quite worse since Baldwin said or wrote these things. And it goes to the deeper issue here, as does the exchange that gave the film its (somewhat altered) title. That deeper issue and that exchange was when Baldwin, in one of the TV appearances, said: “I am not a Ni**#@.” He said that the concept is something that White people had to invent. The need to create such a thing, says Baldwin, points to the lack of responsibility, the deadness inside, to the empty lives led by the vast millions of people on this continent. Canada gets no pass here given the treatment of Indigenous people and the treatment of Indigenous people is touched on every so briefly in this film, but is quite similar to the treatment of people of African descent in North America.

So it can’t be about post-race, or being color-blind. We must acknowledge, as a society, the shitty deal people of color are getting here and instead of that, we’re organizing response teams for new ICE raids and doing ACLU and Planned Parenthood benefits. What NEEDS to happen and what is HAPPENING are further apart than any time in my life. Like Baldwin, I am an optimist because I am alive and excited that the response to the current President’s acts has been pretty fierce, by citizens, if not from the majority of elected officials. But Baldwin notes that ultimately this is an issue of the inner work of White people being stunted. He argues our issues as a country are getting worse because they are (by and large) not becoming human beings, much less noble human beings, as is our purpose for living. They are retreating into something much more in common with lizards, except with much better (and much more dangerous) technology.

The panel that followed the 2.17.17 screening of the film was powerful, once it was wrested away from someone trying to hijack it to foster their own agenda, which appeared to be steeped in bitterness. (Baldwin said he could not blame people for being bitter, but Dr. King said “bitterness is blindness.”) The panel succeeded largely because it was curated well by Marcus Green and because of the presence of Georgia McDade, who talked about her own experience. She related how the bar kept getting higher and higher for her in her education and in her own academic career, only because she is black. Getting Baldwin books via her sister, who was old enough to take them out from the “Colored Library” in her home state of Louisiana, was the most lasting image of the panel, though the other panelists were solid.

It seemed just fine on this evening for allies and comrades to be seen and not heard, so I kept my powder dry. The task of an ally/comrade is not going to be easy and I would attend an event the following night which would prove that. Yet that event will have to be the subject of a future post, or a story I tell you when we next meet.

Viva the American experiment, which we’ll find out soon if it has run its course.