The Road Diet Starts at My House

(Huge thanks to Marcus Green for publishing my essay on the success of the Rainier Avenue South Road Diet. Click on photo to see it on the South Seattle Emerald website along with some other interesting stories.) 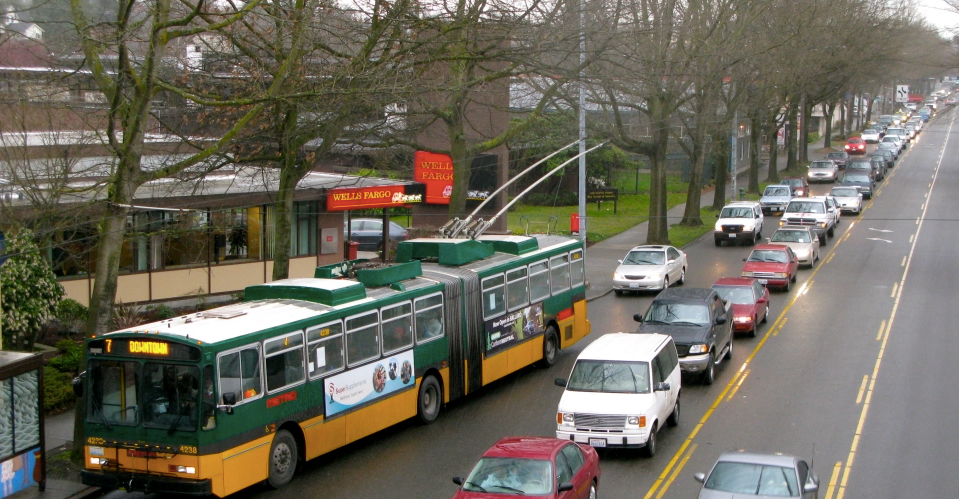 It’s a regular part of the soundscape from the swinging Angeline at 4801 Rainier Av S. The Rainier Avenue South “Road Diet” – designed and engineered by the Seattle Department of Transportation – starts right before the large apartment building and it’s right about at the spot where many turn into the lot to go to PCC that we hear the blaring of yet another car horn. Five or six very un-Seattle nice-like seconds of angst. It pierces the Keith Jarrett, Gary Burton or Carla Bley vibe on the box here in our third floor nest and we don’t bother looking anymore unless it’s accompanied by a crash, which happens now and then, between sirens.

Well, SDOT wants your input and has deemed this part of the Road Diet a success:

In August 2015, Seattle moved forward with the Rainier Avenue Pilot Project.  This project has successfully improved safety along Rainier Ave S in Columbia City and Hillman City.  Highlights from our evaluation report include:

I really think people of the future and are going to look back on our social media “debates” (and the road diet is right up there with proper dog poop disposal etiquette on the Columbia City Facebook page) and wonder just WTF we were thinking. The evidence of Global Climate Disruption is rather overwhelming and the recent rash of mudslides and huge rain totals should be telling us something. Instead, walk by the PCC parking lot, yes the parking lot of the cooperative, locally-owned grocery store, where people line up to purchase organic sunchokes and artisanal Belgian Endives and then look at their Facebook feed in their parked car while their engine is running.

This is the consciousness behind the car horns. Ask Curtis, the current security guard outside Bank of America. He watches drivers rushing up in the “right turn only” lane in front of the bank only to hurl their cars back into the southbound traffic flow while kitty corner Jeffrey Taylor is in his insurance office watching another car blow through the red light at Edmunds.

And the funny thing is that when I drive the same stretch, I become one of the impatient types in competition with others to get wherever it is I have to get with urgency.

But a funny thing happened on the way to the car horns. My partner and I moved into the Angeline in September 2015. We love Columbia City and find ourselves at Tutta Bella and the Royal Room, among other places, regularly. But, the Angeline was the symbol of yuppie gentrification! I’d satirized in verse the hipster/yuppie consciousness that seemed endemic here. But, on a lark, we got a tour of the Angeline and found out we were eligible for the city’s Multi-Family Tax Exemption program. Years after I learned being a poet, running a literary-oriented non-profit organization and being an Airbnb host was NOT the way to unlimited wealth, at least I could enjoy an easy 300 step walk to the PCC to get me some Cherry Tree cola. (It is crack.) And we caved and got an indoor parking spot and started counting our steps. About 700 to the Link Light Rail Station. Another 1,900 from the Capitol Hill Link Station to our spiritual community’s house on First Hill. 2,000 to my daughter’s pre-K, at Orca Elementary and we started getting healthier! We were less grouchy. We slept better at night and started getting resentful when WE HAD TO DRIVE SOMEWHERE! Imagine, in a nation where obesity is an epidemic, where fossil fuels destroy the biosphere and where we slouch around in bodies designed to walk many miles each day. We must walk long distances daily to be healthy. Being sedentary leads to any number of maladies, heart disease, sleep apnea, you name it.

Dig this in the New York Times:

Most mammals can sprint faster than humans — having four legs gives them the advantage. But when it comes to long distances, humans can outrun almost any animal. Because we cool by sweating rather than panting, we can stay cool at speeds and distances that would overheat other animals. On a hot day, the two scientists wrote, a human could even outrun a horse in a 26.2-mile marathon.

If you think walking is for poor people, or for people in “Third World” countries, check your privilege and for the sake of all that is holy STFU with the car horn already!

Back to the Columbia City Facebook page. The Road Diet nay-sayers at this point in time are conspicuously quiet. Probably stuck in traffic somewhere.