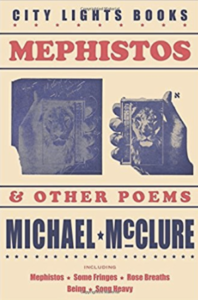 In his latest book, Mephistos, Michael McClure shows how poetry is energy and how he, at age 84, continues to have the vital energy necessary for creating remarkably vibrant, touching and perceptive poems spontaneously in the hardest way to write, Projective Verse. Am reminded of how another New American Poet deeply familiar with this stance-toward-poem-making, in fact who helped shape it – Robert Creeley – near the end of his life did not have the energy to write projectively and reverted back to formalism. McClure approaching is 85 years of age and shows us poetry as cosmology in action; as “soul-science” as he writes in the poem Mount Tamalpais for Etel Adnan:

Torments dream us as we answer with bliss
made of flames and fires and blind tsunamis,
making soul-science and meat spirit
as they fill the coldness and emptiness with glamour.

This is poetry for seekers, those interested in developing their inner lives. This is the essence of “soul-science” and there is no 20th/21st century poet more adept at this than McClure. “If poetry and science cannot change one’s life, they’re meaningless” he states in the preface to his book “Three Poems” and his spontaneous technique allows him access to realms that can be seen as outside himself, or as the highest aspects of his self, the noble self, noble human life force.

And once you are exposed to a phrase like “soul-science” or “rose-breaths” and either dwell on each or any of these or similar notions that McClure uses, they can become a window into a deeper consciousness, a more satisfying way of engaging reality in all its “glamours” to use a word he copped from his early teacher Robert Duncan. In the case of rose breaths, you get a sense that these are the kind of conscious breaths one takes in meditation. McClure has made a habit of writing after meditation beginning with his book “Touching the Edge: Dharma Devotions from the Hummingbird Sangha.” For years in my own yoga practice I’ve had this understanding that the breaths I take during the last pose, savasana, are likely going to be my best breaths of the day, so might as well make the most of them. Then McClure comes up with this notion of “rose breaths” and the concepts are connected in my mind, deepening the meaning of McClure’s work for me, as if that were possible, given the number of essays I’ve written about it and the hundreds of times I’ve recited from memory his poems, or parts of his poems, to friends, lovers and even near strangers like our Santa Fe Airbnb host who was delighted recently at my recitation of McClure’s Action Philosophy.

And speaking of “Three Poems” the poem Dolphin Skull was the first of three long poems in that 1995 book, and the field of that poem has been fertile for him, as he again uses a “grafting” technique, starting with a couple of lines from a stanza of Dolphin Skull but moving into a new direction with the new poem. Example: 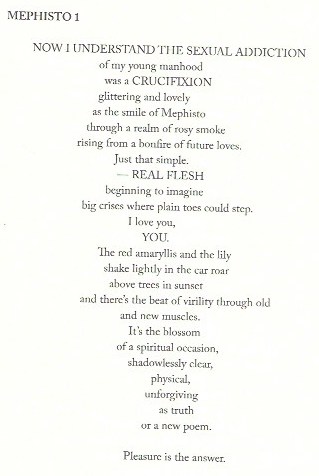 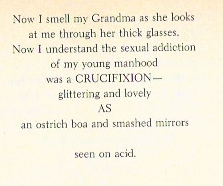 And in the earlier poem, he continued: 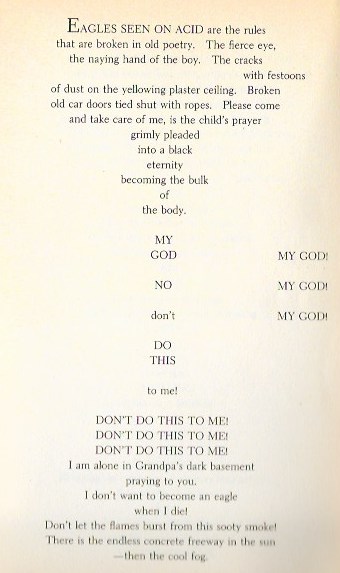 The stanza does not end there, but does end with him twisting between humor and classic McClure sensuality. By that I mean not sex (necessarily) but deep appreciation of the input he garners from what he would call his “sensorium.”

Mephisto is derived from Mephistopheles, which McClure describes as: “the soul-thief, [who] returns aged and exhausted Faust to his inspiration, energy and sexuality. Mephistopheles is an active and witty companion for an inspired journey. He scatters treachery and tricks, and is finally foiled.

Mephisto (the same name) is an angel who helps God in constructing the universe and in the creation of orcas and giant sea mammals.”

And in no place in the book is that spiritual seeker quality McClure has called his “hunger for liberation” more evident (in my view) than in the poem: 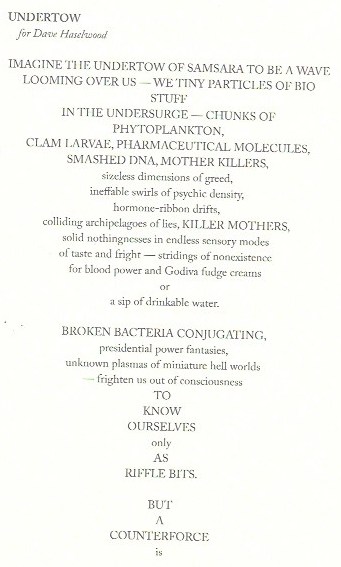 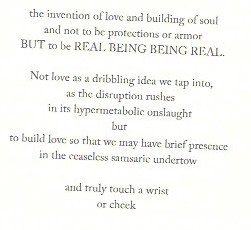 It is writing like this, the most fully realized spontaneous poetics of anyone associated with the Beat Generation (or anyone else for that matter) that has inspired me to suggest that McClure’s use of Projective Verse will be the spiritual legacy of the Beat Generation. But then McClure has – at his best – been adventurous and prophetic, as a blurb on the back of the new book illustrates. It suggests his reading of “For the Death of 100 Whales” at the mythic Six Gallery reading in 1955 was: “the inaugural moment of American eco-poetics.” To have a master poet peaking in his 80s is an event most countries would savor as a rich cultural occasion, but we live in on a continent plagued by an anti-culture, an corporate/capitalist “culture” where there is no time for waking up. It’s bad for business! Beware, once you start reading the poetry of Michael McClure, you’ll stay woke, but then why else are we here?