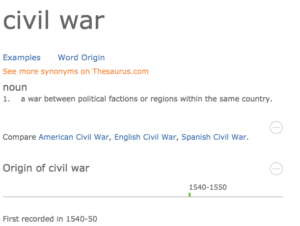 No doubt by now you’ve heard about the vote of the U.S. Senate that would drastically revamp the U.S. tax code in a way that has not been attempted for over 30 years. The minority party (Democrats) only saw the bill 5 hours before it was to be voted on and with difficult-to-read, hand-written, last minute changes scrawled into the margins of the text. No Republicans showed up to debate the measure and it was reported by major news outlets that the famed, fossil-fuel magnates and prodigious funders of right-wing causes, the Koch Brothers, threatened to stop donating to the campaigns of Republican members of Congress until Obamacare was repealed and the tax code, overhauled in their favor. This bill would accomplish both goals.

The Tax Cut and Jobs Act is more than a tax bill. It makes sweeping changes to health care that are expected to lead to 13 million Americans dropping insurance, and it opens up more land to oil drilling in Alaska. It also alters the treatment of state and local taxes, which could affect local government budgets for schools and roads.

Politico reports that the bill would created legal personhood for fetuses:

The legislation includes language that would open up tax-advantaged college savings accounts known as 529s to what the legislation calls “unborn children” as designated beneficiaries. And a bill summary specifically defines that as “a child in utero. A child in utero means a member of the species homo sapiens, at any stage of development, who is carried in the womb.”

US News and World Report is suggesting the Tax Bill is the first salvo in Civil War, likening this bill to the bill that led to the last U.S. Civil War:

Thomas Jefferson himself recognized that the 1820 Missouri Compromise had set the country on a dangerous course by locking ideological and economic differences into an unbreakable geographic division. But the Kansas-Nebraska Act, in 1854, had the almost-immediate effect of destroying whatever remained of ideological agreement across state and sectional boundaries – rearranging the nation’s politics into binary, competing geographic agglomerations (basically, as today, the Northeast and West Coast versus the South and southwestern prairies) with competing economic models and supporting ideological near-uniformity. The rest is history.

The notion of Civil War occurred to me when I saw the vote broken down by Senators, in a New York Times graphic that made the rounds on social media: 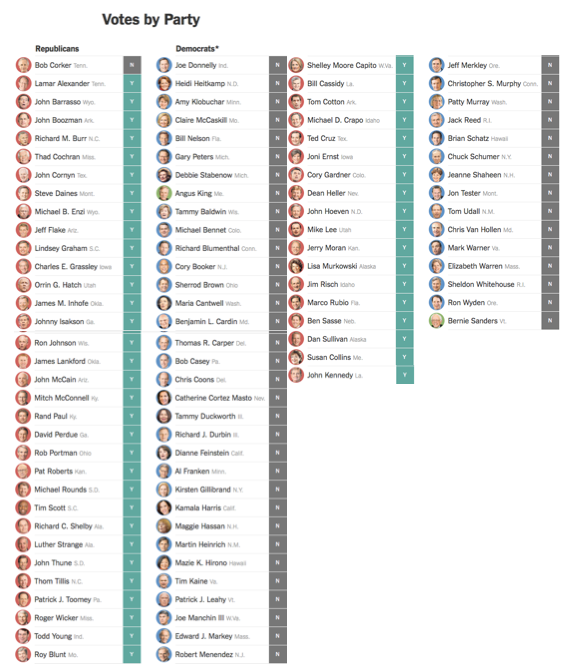 (I had to adjust the graphic to post it.)

I also did the math. I found the most available recent population of each state (2016) and added up all the states with 2 NO votes (all but one of those no votes were by Democrats) and the states that had two YES votes. For states that were split 1 for and 1 against, I divided their population evenly. The NO votes (those opposing the tax scam) represent approximately 182 million people. The YES votes (the Republicans, minus one) represent approximately 141 million people. When you look at the all red states you see states with tiny populations like Wyoming with 586,000 people, Alaska, with 742,000 and South Dakota with 865,000. Tiny all blue states include Vermont with 625,000 and Delaware with 952,000. Of course there are the huge all blue states like California with 39.25 MILLION people, New York, 19.75 million, and Illinois, 12.8 million. Texas is the most populous red state with 27.86 million. It shows how another compromise in U.S. history, the Connecticut Compromise, is now having fatal consequences.

Despite voting NO on something as corrupt, ill-advised and horrific as this bill, the Democrats have not done much else to prevent this downward slide into banana-republic “governance” as Ralph Nader pointed out in June 2017 in the Intercept when he said:

Unfortunately, to put it in one phrase, the Democrats are unable to defend the United States of America from the most vicious, ignorant, corporate-indentured, militaristic, anti-union, anti-consumer, anti-environment, anti-posterity [Republican Party] in history.

A party that that well-known purveyor of liberal thought, Forbes Magazine, says is a “dangerous cult”:

How did the Republican Party became a dangerous cult? Desperate to halt a terrifying tide of social transformation, the political heirs of Jim Crow flooded into the weak and nearly empty infrastructure of the Southern GOP. Men like Alabama’s Roy Moore and Texas’ Rick Perry were the last generation of white Southern men to begin their careers as Democrats. The flight of millions of Dixiecrats into the GOP shifted the balance of power inside the party nationwide. Their fear-soaked, delusional fervor converted that institution from a conventional political party into a white nationalist cult. The Party of Lincoln now exists to help Neo-Confederates win the Civil War politically, long after losing it on the battlefield.

Of course you know that I am in favor of peaceful dissolution of the United States, favoring a bioregional approach to dividing the land of this continent. In the meantime, how to fight back at this latest effort at civil war and at least class warfare? Avoid visiting, or buying products, from the states that had two yes votes. Avoid Alaska, Alabama, Arkansas, Arizona, Georgia, Iowa, Idaho, Kansas, Kentucky, Louisiana, Mississippi, Nebraska, North Carolina, Oklahoma, South Carolina, South Dakota, Texas, Utah and Wyoming. I know, most of that list includes places I would not want to visit anyway, but take special note of all of them. The tide will swing soon, but given the neoliberal, corporatist slant of the Democratic party, as the astute interview with Ralph Nader points out, the long, gradual decline of empire is here, except that it may not be slow.